Thanks to Choice Provisions for the review code

Being the sequel to the addicting gem of a game known as Woah Dave, Space Dave takes the characters of Woah Dave and puts them in a new setting of stages, where you have to protect the trees from being destroyed by aliens, akin to classics like Missile Command. As expected, the art style is exactly the same as Woah Dave, meaning that Dave and his friends look no different than they did in that game, but that’s not a bad thing considering how a lot of effort was put into the sprites of the many enemies you’ll be shooting down, with all of them animating and looking a lot better than the simplistic eye-creatures from Woah Dave.

While Woah Dave was a throwback on Mario Bros, Space Dave is a throwback to the “Phase Shooters” of the early 80s, a genre including games such as Galaga, Missile Command and Galaxian, where the main goal was to defeat every enemy on screen while also protecting something to avoid death. Thus, this is a complete genre shift, and despite the art style being exactly the same as in the previous game, Space Dave feels just as different as playing Donkey Kong 3 after Donkey Kong Junior, where the look is familiar but the actual gameplay is totally different. 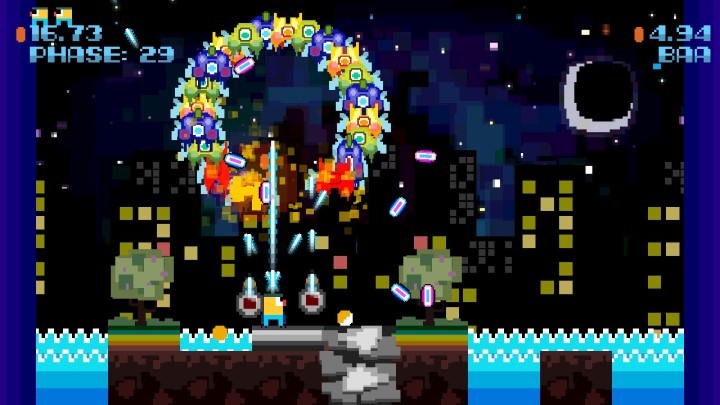 Before you start the game, you’ll have three different difficulties to choose from, and unlike in Woah, none of them are locked, so you can go with the craziest difficulty from the very beginning! There’s easy, normal and hard difficulties to choose from, and the main difference determines how aggressive the enemies will behave, with them going all over the place and shooting in the Bonkers difficulty while being relatively calm in the easiest difficulty. Once you pick a difficulty, it’s off to the game, where you go through a 32 stage adventure that’s separated every four stages by a checkpoint. (Obtained after defeating a boss or miniboss and grabbing the Dave coin) 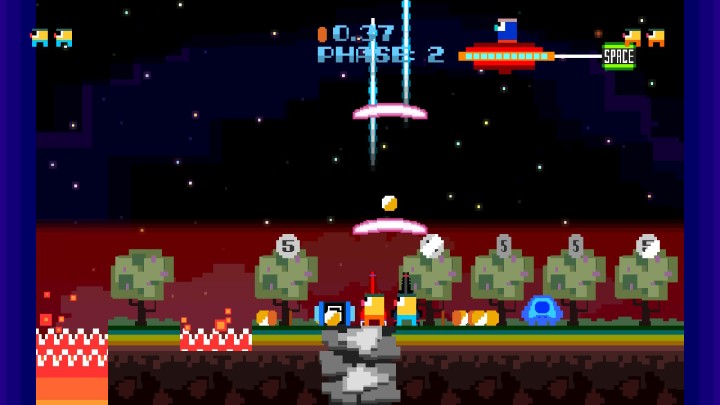 The controls are very basic, just requiring you to move left or right with the D-Pad while also jumping and shooting with the trigger or face buttons. The game doesn’t really have a good autofire, so you’ll have to use a turbo controller like the HAYABUSA arcade stick or mash buttons a lot if you want to kill the enemies before they kill you, especially if you lack any powerups, which Space Dave has plenty of. These powerups include a handy drone, (that can’t be destroyed until you die, unlike the enemies you can possess) the ability to freeze lava pits and make them safe to walk on for a short period of time, a spread shot that can grow wider and wider to cover decent range, and the very helpful rapid shot, which when combined with a turbo controller or fast button mashing can lead to your basic shot turning into a murder beam. And speaking of ways to murder enemies, the special block from Woah Dave returns, only this time the block is green and serves a different purpose than being a screen wipe. During gameplay, one of Dave’s friends will randomly fly over the action and drop the green block in a random location. Once picked up and thrown underneath an enemy, this block will unleash a beam that will possess most of the enemies that come into contact with the beam, (and simply damage the ones that aren’t affected) turning them into options similar to the drone powerup. If you manage to play your cards right and keep your new friends out of harm’s way, then you can make your ship even more deadly by unleashing a lot of firepower at once, although just like with the drones if you lose one of your three lives then it’s back to just your default shot. 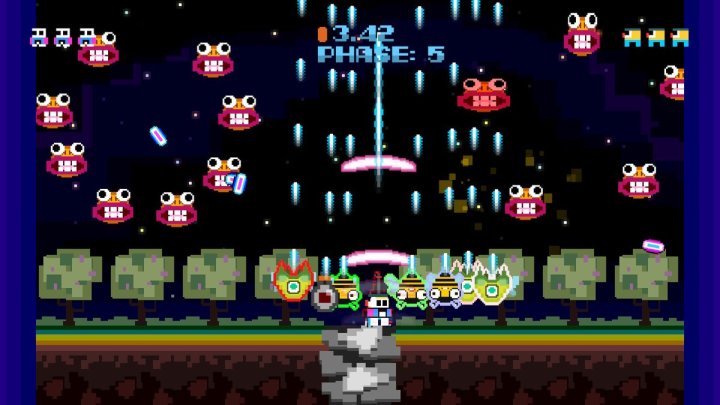 Last but not least is the Co-Op mode, which I had a bit of trouble getting to worked until I was playing in docked mode, as no matter what I would do and how many times I’d configure the controllers in handheld mode, one of the players would keep walking to the right as if the stick was being held down in that direction, even though it wasn’t and restarting the controllers didn’t fix the issue. It wasn’t until I put the switch in docked mode and used a set of two joycons and a pro controller that I was able to get the two-player working without a hitch. Outside of that minor note, Co-Op simply adds another player to the mix, giving them their own set of three lives, and leading to even more chances to be overpowered, since if you fire a shot while standing in front of your partner, a giant wide beam will be fired from your partner instead, and in the earliest stages of the game this will completely destroy phases of enemies in no time at all and even murder the first miniboss the moment it spawns on screen. Needless to say, working together with your friend will lead to an easier time, and it’s so much fun causing so much destruction!

In conclusion, Space Dave was a game that took a lot longer for me to the hang of compared to Woah Dave. It’s a lot easier to die even on the easiest difficulty, and mashing the button over and over again to fire can be really tiring. But once you get the hang of the powerups and plan out ways to build your arsenal, then Space Dave becomes just as addicting, if not moreso than its predecessor. Add the intense Co-Op, in-game achievements and online leaderboards and you have yourselves a very addicting and enjoyable followup to Woah Dave. It’s just a bit of a shame that it’s not as accessible as that game and the price is double that of Woah’s despite it being a short experience. Still, this is one Hi-Score chaser you don’t want to miss out on!