In this action-platformer, you take control of a girl named Wyrn who sets out on a quest to destroy as many heroes as she can in order to become the best hero of them all.

Yet another game jumping on the overflowing pixel-themed bandwagon, BLEED does manage to avoid the annoying trend of sticking to an art style that’s generic by still putting in effort in detailed backgrounds and impressive scaling on the stage backdrops and bosses. Seriously, some of the animation in this game can be surprisingly smooth, and a few of the boss designs are another neat touch on this game. 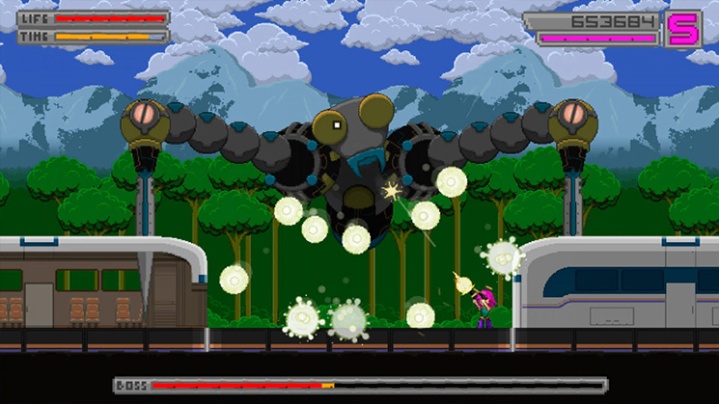 The main goal of each of the stages in Bleed is to make it from the start of the stage to the end, dying as little as possible and using your special time powers to evade attacks and carefully aim at your foes! The controls are very basic, with one shoulder button operating as your jump button (that can be pressed multiple times for mid-air dashing) and the other operating as your slowdown button, which activates the time effect until the button is released or the time bar runs out. Due to the main actions being assigned to shoulder buttons, there isn’t really a fire button, at least not by default, and instead the game uses the right stick to both aim and shoot, not unlike a twin-stick shooter. (You technically can assign the fire command to a button via the options but it does not work well through this method at all) Defeating enemies without getting hit or waiting a while will also level up a bar on the top-right corner of the screen, increasing your rank that can be used to increase your point total at the end of a stage, although since this requires you to constantly be killing things without taking damage, this is incredibly difficult to keep above a D, almost requiring mastery of the hardest difficulties in order for the game to give you the amount you need to fill up the meter.

So, once you get used to the controls, you’re off to a stage! Each of the stages are fast-paced, throwing you into the action right away regardless of the difficulty you choose, although the difficulty is still a very important element in BLEED as it determines how hard enemies will hit you along with the frequency of some of the enemy spawns and their attacks. Still, whichever difficulty you choose, the aforementioned controls are your friend to beating each stage, and dying sends you back to the last screen you entered. Unfortunately, this does lead to a minor problem, as Bleed ends up with some later stages where the gap between screens is so long that it can be a lot more frustrating upon dying as you get sent back a long ways, making some stages feel inconsistent with checkpoints. (Good luck on Co-Op mode where it’s even more difficult!)

Luckily, that’s where the game’s shop will come into play to give you a hand, as the points you gain from clearing a stage or bonus mode will allow you to purchase a variety of new weapons for Wyrn along with health upgrades to extend your life bar, which makes these difficult sections a lot easier, although for some inexperienced players it might require a bit of point grinding in the game’s Challenge mode in order to get what you may need. Some of these extra weapons can really change the tide of battle, with some of my favorites including the Flamethrower due to its piercing effect and the Rocket Launcher due to the increased damage output. Eventually, you will be able to clear this game with some practice, and doing so the first time will unlock the Arcade mode, where you have to clear every stage in order with limited lives, and it’s just as crazy as it sounds.

In conclusion, BLEED is a fun little action game that takes a while to get the hang of, but once you do you can do some pretty sweet tricks to put to good use in the harder difficulties and bonus modes. While the Switch version of BLEED does lack the achievements found in other versions of the game, there’s still a decent-length to be seen from the campaign and bonus modes. It can be a bit grindy in some places though, and the local co-op isn’t as fun as I had hoped, but this is still a decent game that has some framework for improvements, and is fun enough to be worth a look if you’re into these types of games or see it on sale. I give BLEED a 7 out of 10.