Thanks to NIS AMERICA for the review code

When a powerful dictator manages to take control of the land of Asteria and people begin to vanish, a resistance group known as the Revolutionist Party take the stand to fight and stop the source of the evil! Starting off with your custom character being found imprisoned with their memory wiped, Demon Gaze II plays a lot like the other first person dungeon crawlers made by Experience, (The team behind Operation Abyss and Stranger of Sword City) but with more of a focus on the custom character since this time they have had prior experience with the party before their memory wipe, unlike the other games where the custom characters were just blank slates.

Being a first-person dungeon crawler in the same vein as Operation Abyss or Stranger of Sword City, it was to be expected that the game’s structure and menu design is similar to their other titles, from a first person perspective within dungeons, being able to make select dialogue choices akin to a visual novel when talking with NPCs, and selecting where to go via a menu system. Thankfully, we don’t have to deal with any strange looking art style like in Stranger of Sword City, as now the entire game is back to an anime art style, similar to Operation Abyss and the last Demon Gaze game. The design of the dungeons also is a lot more impressive than prior attempts, with more effort being put into these dungeons to make them feel like more than interior buildings or caves, and the soundtrack has a whimsical style going for it.

Demon Gaze II’s main gimmick is introduced shortly after you clear the prologue dungeon, where your main character gains the power to absorb the souls of defeated demons through his special eye. This is how you recruit party members in this game, and it’s done over the course in the story instead of being something you could just do anytime you wish with an NPC like in some other dungeon crawlers. This means that the game is made with the initial lack of party members in mind, and the game even offers up to five difficulty settings for you to change around at any time you visit the showers in your Team Base if that wasn’t welcoming enough for you! This makes it a lot more enjoyable to start out with than Sword City or Operation Abyss, where you could hit a roadblock if you end up not knowing what class or characters you need to make to deal with a certain situation.

Of course, that doesn’t mean the game’s a cakewalk, as you can easily make it a grueling experience with the difficulty select if you so desire, and even on the lower settings managing your HP and MP is important when dealing with tougher foes and bosses. Such tough fights is where the Demonize option can lend a hand, as using it will temporarily upgrade all of the demons in your party to lend themselves your strength for stronger attacks and skills, before it wears off and the party returns to normal. Demonizing your party takes up energy from the “Star Power” meter, which increases over time as you defeat enemies and go through many battles without draining it, so it’s important to hold off from using the skill until you’re in a really dangerous fight. 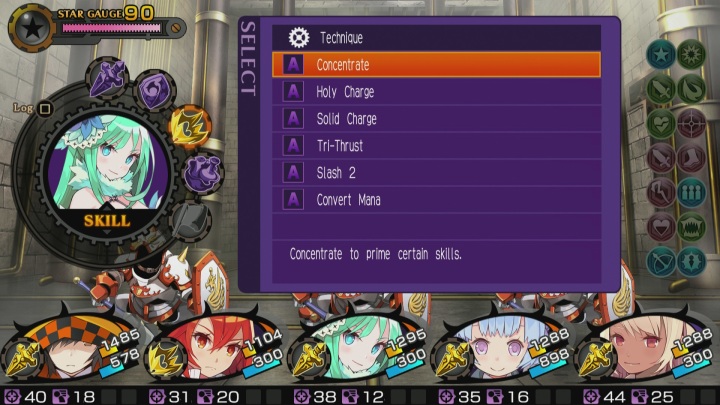 Outside of that, the game plays like your standard first-person dungeon crawler, having you take on numerous quests as you travel through one of the many dungeons in this game. Unlike others in the genre though, the only way to really advance the story is to take advantage of summoning circles laid throughout each of the dungeons, where using special gems that you can find from defeated enemies or buy at the Item Shop will summon a foe that will drop what the gem is based on, (so for example, sword gems will summon enemies that will drop random swords to equip your team with) which when combined with other gems that can buff the enemy summoned from the circle, can be used to get really good weapons and armor very early on in the game, as long as you’re willing to tackle the challenge required for them that is. At first I was concerned that if you ran out of gems, you’d have to grind a ton in order to hope for a random drop or get enough gold to purchase what you need to progress the plot, but luckily the weakest of these gems are very inexpensive to purchase at the item shop, making this a complete non-issue.

Last but not least, Demon Gaze II offers another feature to help you out before battles, by allowing you to use Maintenance Shards dropped from bosses to take your demons out on a date. Yes, you can date the former bosses you recruit and have them learn more skills that way. It comes off as totally goofy and kinda stupid, but it ends up being really helpful as the skills you can learn from repeat dates with your team will greatly benefit you in the long run, plus it also leads to a lot of cute character moments that flesh out the behaviors of your former foes.

In conclusion, Demon Gaze II is by far the best dungeon crawler from Experience that I have played. While it’s not quite as enjoyable as an Etrian Odyssey game, it gets pretty darn close, with a flexible difficulty curve, intriguing dungeon designs, and a nifty little recruitment system. The one major problem of the game that made it a bit hard to get into at first came from the overabundance of hiding stuff in ways that can make it easy to get confused or lost, though this became easier to get used to once you learned the nature of kicking walls to find hidden secrets or passages. The combat can also still feel very basic even as you increase the difficulty, which makes the whole nature of exploring the dungeons themselves more fun compared to fighting enemies, at least until you learn a lot of skills from hanging out with your party members.

Still, this was a very solid dungeon crawler that I did enjoy playing a lot more than other attempts in the genre, and it’s nice to see that Experience put effort into making a dungeon crawler that can be recommended a lot more over their other attempts. If they keep trying, they may eventually find a way to surpass the legacy this genre has laid out for them, and the tough competition from Atlus. I give Demon Gaze II an 8 out of 10.