Thanks to Tozai Games for the review code

Made with a voxel art style, Lode Runner Legacy manages to somehow avoid the usual curse that voxel art brings to games, where it ends up making them all look the same and akin to Minecraft or other popular voxel games. This is because Lode Runner Legacy manages to give the game a bit of a blockier look, with the stages, items and enemies all being rendered in three dimensions, despite the game taking place on a 2D plane. 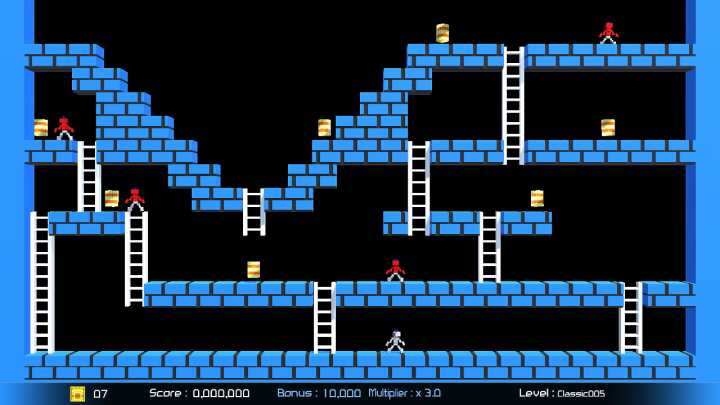 This look is made more apparent when you look at the Classic stages, where the simplistic stages from the original computer game are recreated in lovely voxels that keep the original feel. In a way, it’s a lot like what the recent Boulder Dash game did with their classic levels.

Lode Runner Legacy offers several modes of play, most of which open up as you clear more stages in the Adventure mode, which offer fifty medium difficulty stages that introduce the mechanics of the game. If you haven’t played any other version of Lode Runner before, then the controls are simple to grasp. You move left or right, unable to jump, and you dig to the left and right of you with the Y and A buttons respectively. The main goal of each stage is to make use of digging through blocks, trapping enemies, and climbing ladders in order to get every piece of gold in a stage. Once all the gold is gathered, exit ladders materialize, which is your sign to make it out safely before an enemy gets you. The more points you gain from clearing a stage with bonuses, (such as not dying at all, clearing the stage really fast, among other things) the more stars you get, with up to three in some of the modes while only up to two stars are rewarded per stage in the Classic mode and any online levels.

With the basics out of the way, now’s the time to discuss the different modes on display, and how they all change the formula. Outside of Adventure Mode, there’s Extra mode, which is really just a set of harder stages with some new enemies thrown in such as a walking Drill that can burrow through blocks to chase you down, Puzzle Mode, which removes the enemies and offers stages that can only be solved through logic and thinking and must all be done in one go, Classic mode, which are a bunch of stages taken from earlier versions of Lode Runner with a retro skin on them, and finally, the Co-Op mode, where you and a buddy must work through thirty stages built with two players in mind. All of these modes really just add up to more levels to enjoy, and none of the modes save for Puzzle manage to change up the gameplay, which isn’t really a bad thing since every mode is very enjoyable, and a great way to relax with puzzle goodness. 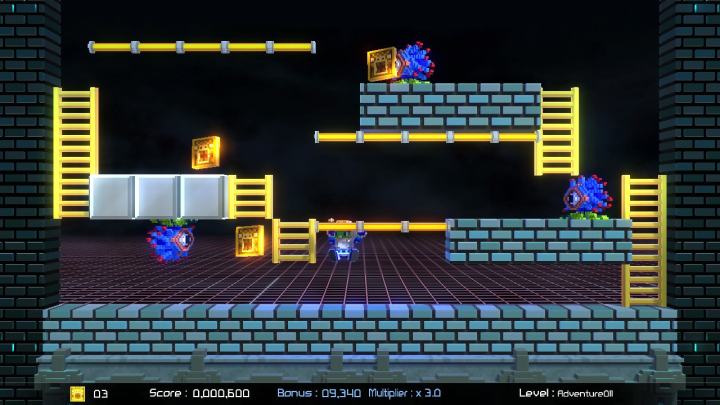 Last but not least, there’s one more aspect of this game to discuss, and that comes from the Online Community. In the Craft Mode, you can design your own custom stages, (which works like how it did on the NES version of Lode Runner back in the day) and also completely change the look of the player character and the pieces of gold, by painting, building and breaking apart the models to your liking. Sadly, doing the latter is a lot more tedious than it should be, mainly because it’s all done by moving a virtual cursor around the screen with the joystick, and using the buttons to pain and edit the models, with no touchscreen support to be found. Why such a perfect method to using this level editor wasn’t included is beyond me, but it’s a huge shame that this version of the game couldn’t benefit from the Switch’s touchscreen at least to some extent. 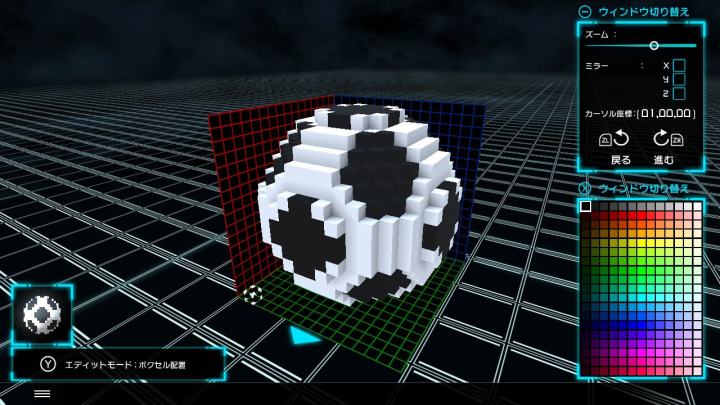 Still, you can always download and play levels from the online servers, which will also download any corresponding characters or items, such as my little Braixen I made right here. If you happen to like a level or character a lot, you can even give it a simple rating with the plus button, if you so wish. Another frustrating omission that I noticed in this mode was the fact that you can sort by popular levels, recent levels or even all levels made by the creator of the currently selected custom item, but not creations made by your own friends, despite the fact that there are hi-score leaderboards in the game that keep track of your friends’ scores perfectly fine. Without the ability to see what our friends have created without stumbling upon it or entering a code, it kinda takes away from the point of even sharing these creations to begin with.

In conclusion, Lode Runner Legacy is a phenomenal tribute to the legendary computer game, offering hundreds of fun, engaging stages with a ton of replay value from gathering every single star in every stage, along with beating the high scores of your friends online, or downloading whatever cool new stages pop up in the online community. Unfortunately, two big issues do prevent this from being one of the absolute best level-creator games out there, mainly due to the lack of touchscreen support for the editors and the inability to filter creations by only those that your friends have created.

Still, for any retro enthusiast who hasn’t played a Lode Runner game before, or for anyone who has dabbled in either the NES, PC Engine or computer versions, this is a must-buy, especially at a price $8 lower than the Steam version, which doesn’t really offer much more outside of achievements that amount to nothing more than just getting every star in the game. Retro puzzle fans, take note! I give Lode Runner Legacy a 9 out of 10.