Thanks to Forever Entertainment for the review code

Using the same pixel assets from the original Timberman game, Timberman VS adds a few new backgrounds and an improved menu system, and completely changes the soundtrack from a chiptune one to a repetitive one. Still retains the same general look with some new paint, but nothing too noteworthy.

There are three main modes on offer in Timberman VS: The classic Arcade mode where you and up to four friends can race to see who can get the highest score without hitting your head on a branch, a single player Hero Mode where you go for a set score in order to rescue birds, and a four-player party Race mode where you race to see who can reach a certain score first, while being invincible at the cost of getting stunned whenever you mess up, along with being able to use a boost ability where the CPU autopilots the cutting for you. 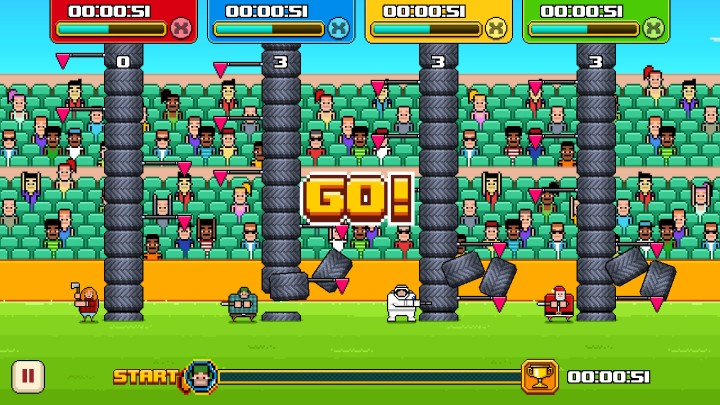 Regardless of the game mode, the concept and controls of Timberman VS are incredibly easy to get the hang of, as all you need to do is cut a tree left and right using the D-buttons or the shoulder buttons, with each cut counting as a single point. The game ends if you run out of time (with the timer speeding up the higher the level is) or if you hit your head on a branch by cutting on the side where a branch is incoming. It’s very, very basic and arcadey, which works fine for the classic and hero modes and gets the job done. However, Timberman has also been known for fierce and frantic multiplayer, where players race to get a certain high score or see who has the most endurance. While there’s no online multiplayer in Timberman VS like with the original Timberman on steam, there is local multiplayer, and since local MP is where the Switch shines, it does seem like it would make sense for the game to come to the platform.

How does the multiplayer hold up, then? Well, it’s a bit of a mixed bag, if I may be blunt. Up to 4 players can compete in the arcade mode to see who has the best endurance, which means you can choose to only add one or two players if you so wish, but your enjoyment depends on how well your friends grasp the game. If they’re the type to mindlessly button mash, then the games will be over quickly and it won’t be that fun at all, but if they’re able to grasp it and they get good, then you’re in for an incredibly fun multiplayer experience! That being said, I felt the Race mode works far better for both experienced and inexperienced players, since it only stuns you if you make a mistake, but still keeps all players into the game until they reach the set score, which ups the frantic nature of a game and just makes it a ton of fun! The only problem is that for some stupid reason, the game forces that mode to be a four player race to the finish, thus there’s no way to only race 1 V 1 with a friend or two, you must fill the empty spots with CPUs. This is just a confusing design decision I couldn’t get the reasoning behind, since the Arcade mode allows you to face off with up to four players, but if you only have one buddy around it just makes it a 1 V 1, like it should be. If the Race mode allowed you to turn off the CPUs(unless there’s some option I’m just too oblivious to have seen during the multiple sessions with my friend) then this would have been a lot more likely to be pulled out at game parties.

In conclusion, Timberman VS is an incredibly average transition of the Timberman formula to the Nintendo Switch, offering a basic arcade mode that gets very repetitive when playing solo, a decent single player time attack mode, and a very enjoyable multiplayer race mode. However, the lack of online multiplayer, achievements to task you with numerous goals that could have extended replay value and the lack of being able to turn off the CPUs in the race mode just make Timberman VS a really average experience that could have been a lot more enjoyable on the Switch, especially since it is a perfect system for local multiplayer and the good bits that are already there are enjoyable. But instead, I feel that the developer might have gone overboard on stuffing as many unlockable characters as possible with an EXP system to encourage grinding as the only means of really getting anywhere in this game, instead of incorporating fun challenges similar to the Hero mode to make the single player not as boring, and tweaking the local multiplayer to make race mode easier to pull out in a party. Still, for $2, it isn’t a big waste of money, and it is worth checking out if you have leftover Gold Nintendo coins, but I’d honestly recommend the good ol Steam version of Timberman over this.