Thanks to Teyon for the review code

Joining the infectious bandwagon of pixel art games, Tallowmere’s art style is incredibly generic, merging average at best sprites with pretty hideous background tiles that look as if they don’t fit in this type of game, being all grainy and somewhat realistic due to the texture on the blocks. It’s kinda hard to explain, but while it does look and feel like you’re in a dungeon, it also comes off as if it’s not meant to belong in a game that uses 2D sprites. The music’s beyond forgettable, too, and none of the tracks felt like they fit much at all.

Tallowmere is yet another roguelike for the Switch eShop, meaning this is a game where the main goal is to go into a dungeon, see how far you can last until you die while focusing on getting all the achievements over the course of many, many playthroughs. While other roguelikes such as Quest of Dungeons are tons of fun due to great balancing and the way the game’s played, Tallowmere does not fall into the category of being fun. For starters, every time you start a new game, you begin with a health potion and an axe. You jump with the B button, attack with the Y button, block projectiles using a shield the ZR button and simply defeat all the enemies in your path as you try to find a key to the exits in each room of the dungeon. 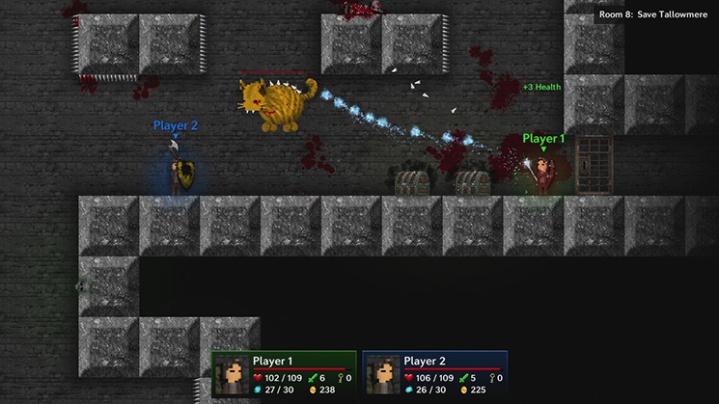 Sometimes enemies will drop items or equipment for you to use, and eventually you will either die or somehow make it to the end, usually the former. Death isn’t usually due to a silly mistake or rushing into things, however, but rather it’s often because some dungeon rooms will just have enemies in a spot that will not hesitate to pin you up against a wall as they constantly damage your very small health bar until you die, and as a bonus, they may even push you against a spiked wall for more damage! This is combined with other odd quirks, such as an infinite jump and a really wonky movement cycle where it feels like the player’s arms flail about whenever he swings to attack. Still, if you’re lucky enough to get rooms where you can take your time and build up your arsenal (including weapons such as flamethrowers and swords, among many others) along with getting  gold for purchasing more helpful items, there is a decent amount to experience in the dungeon, along with a handy, long list of in-game achievements to unlock. 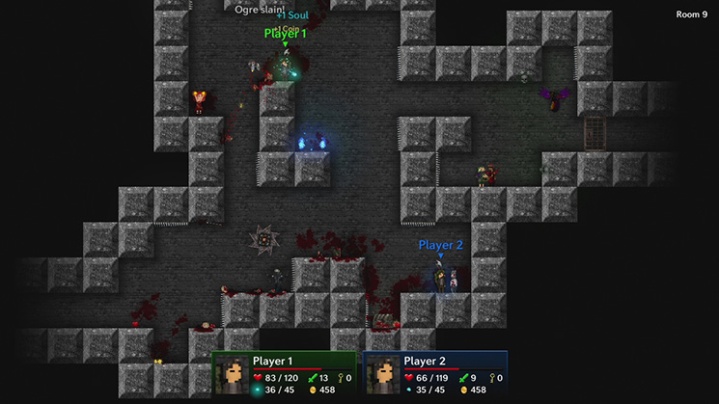 If you don’t want to deal with the challenge the game throws at you sometimes, you have to choose to outright murder kittens from a basket in the main hub room. (each kitten gives you 10 extra health points) Considering how doing this disables the achievements, (obviously as it would make the game a lot easier) it’s fair to assume the kittens were likely included as a means of emotional manipulation, which actually works surprisingly well on me to say the least, as even with the blood effects turned down and the pretty dull art style I still didn’t really want to do it. Truly, this oddball way of choosing to get extra health is the most clever thing the game actually does, which I wish could be said for the rest of the game.

In conclusion, Tallowmere is just a floaty, boring mess. While action platformers could easily work in a roguelike setting if done right, there’s also the risk of unbalanced or uninteresting gameplay, both of which Tallowmere manages to accomplish. While there is a lot of content to enjoy if you do get yourself hooked on the game, the floaty controls and the enemies’ obsessions with killing you on a wall just didn’t click with me, and really the only things the game does that I can give it props for is its interesting method of using morality to have the player debate if he really wants that extra bit of health, and four player co-op, even though I couldn’t really test it with more than two players and said two player game didn’t last long at all. Combine that with a pretty high price point for an uninteresting dungeon crawler with a dull art style, and thus I give Tallowmere a 4 out of 10.