Thanks to Turtle Cream for the review code

The Sun has gone missing, and The Moon decides to go on a planetary quest in search of his friend! A story as simple as it gets, really, even when you beat the first quest of the game and the levels reverse.

Presented in a monochromatic art style, there’s barely any color to be seen here, just a ton of black and white with a few tints of color in some stage backgrounds. This simplistic visual style works wonders for the setting due to being set in space, and the zen music helps to relax the player. The world map is akin to half of the solar system, with each planet being on a “ring” around the sun.

The goal of each stage in 6180 is to guide the titular moon from one side of the screen to the other, entering a small round portal to clear the level and continue the journey. The controls are very simplistic, using the left stick to move, the A button for jumping, and the B button to activate a special orb power that’ll interrupt your jump. Unlike most platformers, falling down won’t lead to your death. In fact, it’ll warp you back to the top of the screen, and vice-versa if you choose to jump, which leads to some clever platforming situations where you need to jump properly to avoid the many, many spikes that impede your progress in hopes of breaking the moon. 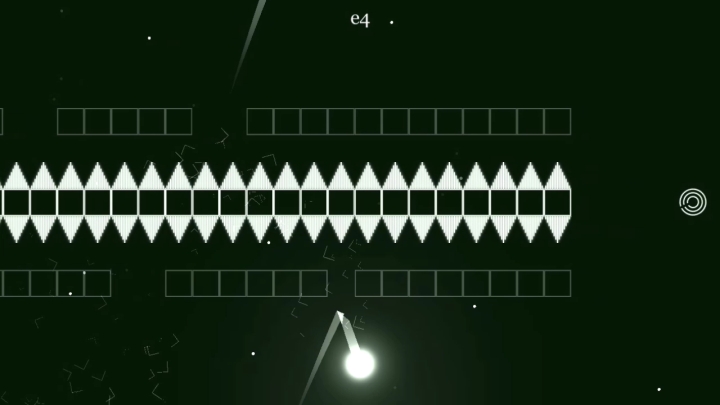 Sometimes during the middle of a stage you’ll come across a white square, which acts as a checkpoint if you end up bumping against it, and you’ll respawn from that point upon death. That being said, even with a checkpoint the levels in 6180 aren’t that long at are, only lasting up to a minute in length at most. The difficulty comes from trying to navigate the short stage in a safe way while taking full advantage of the platforming mechanics, and since each of the five worlds contains 10 levels each, that leads to fifty levels in total, which makes the base game short enough you can beat it in barely an hour. Despite the short length, the game manages to be a nice way to relax and it’s very fun to just breeze through the levels.

The game does make an attempt at extending the short playtime though, with 12 in-game achievements to unlock and a “Moon Rising mode” where the game is played backwards from the end of the normal game to the beginning, with every level taking place upside down and in reverse to indicate the moon’s orbit. It’s an interesting twist that changes up a few levels to say the least, but some of them barely feel any different in challenge at all, and as a result the difficulty doesn’t feel like a totally straight curve in this mode, even though neither modes are actually hard to begin with.

In conclusion, 6180 the moon is a fantastic zen platformer for the Switch eShop, doing a good job at being a relaxing platformer on a good budget. That being said, despite well designed levels for the first half of the game, the second half just feels like a weak attempt at padding the game, and the in-game achievements don’t task the player with any specific challenges or do anything that isn’t doable in a normal playthrough. In fact, even if you ignore every achievement ever and never read them, you will get all 12 during the course of the adventure, or at least nearly all of them since most of the achievements can be obtained in normal play with little effort. Still, 6180 the moon is an enjoyable time and certainly worth spending an hour or so on with a gold point purchase, with a solid price point to boot.