Thanks to Vertical Reach for the review code

In this puzzle game, you take control of someone setting out across the solar system to clear planets of a mutating creature known as Yuso, shaped beings that can be erased in chain reactions. Outside of this tidbit, the story is barebones, save for what those in charge of the planets explain whenever you enter a new one.

Yuso goes for a really simplistic UI, one so simplistic the game can pretty much be played with only one finger, and going along with this are colorful backgrounds and cute designs for the titular Yuso. Each planet also has a main character to act as the “Leader” for it, and the designs of these characters seem to have been done in a way that was trying to ape those of Puyo Puyo, being very anime-like in design while also having an element of goofiness to them.

The main goal of Yuso is to travel to each planet in the solar system and clear out Yuso in the 10 stages that each planet contain. You can do the 10 stages of each planet in any order you wish, and if you clear enough stages then you’ll unlock the next world. Even if you didn’t complete every stage on a planet. This means that if you get stuck on a very tricky level it’s not the end of the playthrough as long as you can skip to later levels and come back later. Still, clearing them all is required to unlock everything, so you do have to get to them sooner or later. 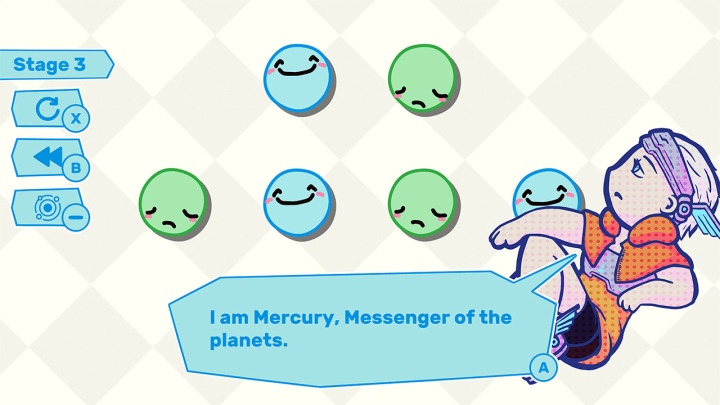 Levels in Yuso are very, very simple to grasp. The titular Yuso are little balls that hang around, and if you click on one of them while it hangs next to other Yuso, it’ll explode, the surrounding blast erasing any other balls of the same color, changing balls that don’t match into the color of the explosion, or undoing square Yuso, which require multiple explosions to become popable. Usually if you figure out the sequence in which you’re able to pop bubbles correctly, clearing most of the stages takes little to no time at all, while some stages can easily stump you, especially on later planets. Luckily, the unlock requirement for later planets means that, as mentioned before, you can just skip the occasional tricky level to come back to it later.

The only aspect left to discuss are the stage hazards that are introduced fairly quickly in Yuzo, a bomb and a hat. These hazards are usually on a timer, and when a certain amount of turns pass they will explode and cause some sort of disruption depending on if any Yuso surround them. The bombs’ explosion will cause all surrounding Yuso to act as if they got struck by a Yuso explosion of the color of the bomb, so if yellow Yuso surround a yellow bomb, they’ll be erased while any other color will be changed to yellow. The hat on the other hand, is what causes a lot of the puzzles that include them to become a lot trickier, since their explosion will cause any surrounding Yuso to be turned into Squares, which can make some levels flat-out impossible to clear if there aren’t any remaining Yuso to undo the squares. Thankfully, you can rewind to either the beginning of the stage or a move at a time whenever you wish, making it very easy to undo any mistakes and figure how to clear levels in the proper way. Still, this is pretty much the entire game, for better or worse.

In conclusion, Yuso manages to be a decent puzzle game that focuses on chain reactions and thinking of how to overcome them. There’s not much this game offers that other puzzle games of this type lack, but on the Switch eShop at least this seems to be the first one of its kind, giving Yuso a head-start for those looking for a good puzzle game to spend a few hours with. The $8 price point does come off as a bit steep and there’s almost no replay value for stags you’ve already cleared, but if you can handle the price and don’t mind the simplicity, this should be a good puzzle game for nights in bed.