Thanks to Limited Run Games for the review code

In this episode adventure, you take control of a boy named Marty Hall, who must use his special notebook to stop the rise of Commander Hood, find his true destiny, and save his town from his evil reign!

Originally made in 2012, before The Shovel Knight Effect of 2014 kicked off and made so many indies copy the NES visual style, Saturday Morning RPG ends up playing and feeling like a retro indie game, both in terms of age and appearance. Made with the purpose of being a love letter to the 1980s-early 2000s in mind, the game uses 16-bit sprite art for the player character and NPC characters outside of battle, switching to more detailed pixels when a battle is engaged, both for the enemies and Marty. The only real fault I had with the visuals is that the overworld sprites are paired with really weird looking 3D backgrounds, making some environments look jarring and bland and the game as a whole being a bit on the strange side. 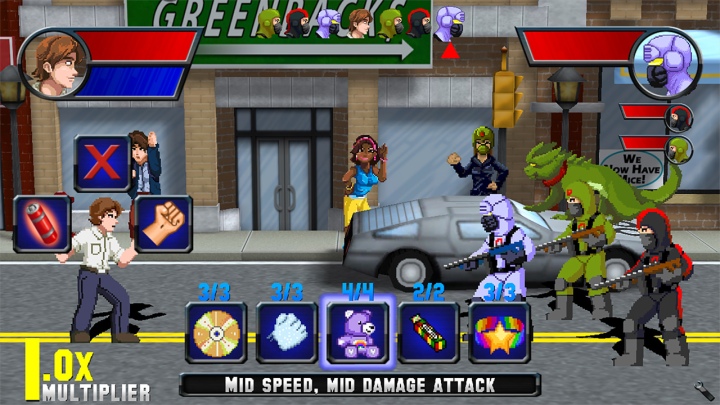 Battles are presented in a side view, where Marty rushes in from the left side to fight the enemies on the other side of the field. The menus in these battles are very simplistic as a result of being made for mobile devices, making them really easy to navigate in both handheld and TV mode. Marty can equip a wide variety of moves to his notebook in order to use against the enemies, each of which come with their own unique animation, from being able to throw a CD like a frisbee, raising a sword up in the air, using a toy robot to transform into a truck and run over people, to smashing enemies with a floppy disk that causes them to turn into a BSOD once defeated, among many others. 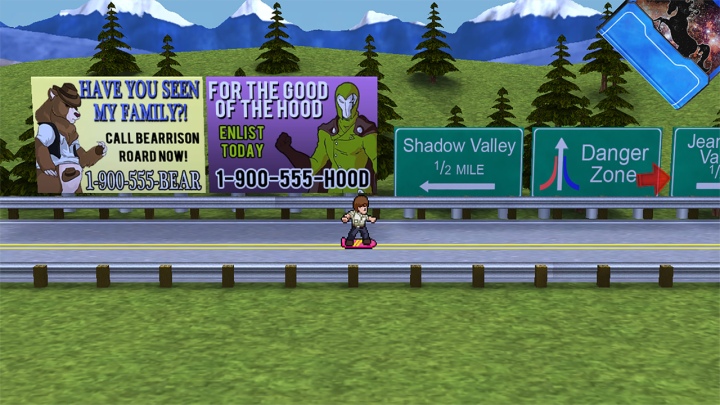 Some enemies have their own animations for attacks, and while Boss characters tend to be the ones with the most unique of these animations, some of the common enemies do a few things that I found amusing, mainly when it comes to how they give themselves stat boosts or heal. In the case of the Commander’s foot soldiers, they’ll eventually learn how to shoot a wave of powder that blows back toward themselves in order to increase their stats.

Accompanying the game’s solid visual design is a surprisingly excellent soundtrack, one I honestly didn’t expect to like much in the slightest, expecting it to try and imitate other 16 Bit RPGs like I’ve heard so many times before, but surprisingly the entire game uses high-quality audio with no chiptunes, reminding me of redbook audio that I so love hearing in games. From the soothing and relaxing school theme in Episode 2, to the Boss theme, to even the normal battle theme and victory jingles, this soundtrack is really stellar, and it was even made by the guy who worked on the Transformers Movie OST, someone who I never heard work from before now, but I’m glad I finally found his talent.

Saturday Morning RPG is an episodic game split up into five episodes. However, while these episodes are presented in a linear order that connects the story together, you can choose to play them out of order after the first episode if you so desire, although in later episodes the enemies will be a lot stronger to compensate. Each episode consists of several main objectives and sub objectives for the player to complete, with the main ones being what progresses the plot along while the subs provide access to extra EXP, stickers and items that can help during the grand adventure. Along with sidequests, you’ll also be rewarded with EXP bonuses just for exploring every nook and cranny of an area, even if nothing’s there, so be sure to look around for some exploration bonuses.

Whether you choose to do the main quest or sub quests, battles are still a key factor in SMRPG. In fact, you can’t even run away from them, making them mandatory to complete. Before each battle, you are able to scratch off equipped stickers attached to Marty’s notebook, either by rotating the joystick like mad or by rubbing around on the touchscreen. Each of these stickers will grant Marty with a stat boost that lasts for the entire battle, and said stickers can be obtained over the course of the five episodes, so switching out your old stickers when you get better ones is recommended.

During the actual battles, you have several options to choose from for combat. The first thing that should be done right away is to increase your damage multiplier, which can be done in three different ways. Starting with a basic, yet consistent charge method where you just use up some MP and you’re done, to a button-mashing charge where the multiplier increases based on how fast you can fill up a meter by button mashing, (Having an old-fashioned arcade stick with a turbo feature around makes this one the best option by far) and finishing off with a timing-based charge where you have to time a button press when the meter is close to being full. Either of these three methods will increase your multiplier by quite a bit, and the higher the multiplier, the more damage your moves deal. However, keep in mind that eventually some enemies will gain this ability too, so you have to be careful and take them out before they deal heavy damage to you

Speaking of moves, SMRPG gives you plenty to choose from. Unlike a standard RPG where you gain moves via level up, you equip all of your moves before a battle starts, and each of them have a limited number of uses per battle that varies on the item. For example, a CD may require you to time a button press correctly in order to deal the most damage, while the Floppy Disk doesn’t require any prior prompts and the strength/accuracy is random. Meanwhile Cookies can be used to restore your health while a Teddy Bear or Joystick can deal damage after completing a sequence. However, since these moves do have limited uses, there’s a standard attack that’s always free to use if you don’t want to waste your ammo in a battle, and all it requires is that you time a button press correctly to deal the most damage. (think of it like golfing in Mario Golf when the meter’s coming back to the starting point) 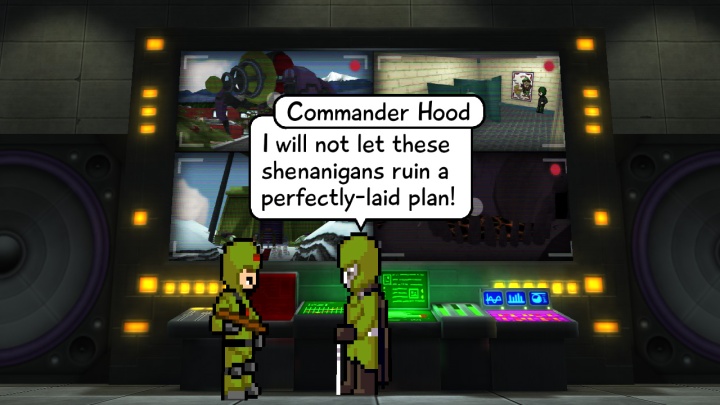 When your turn ends, depending on the speed of the enemies and yourself, you may be waiting quite a while for your turn to come up again, or if you do something fairly basic like a gauge charge or health item you may be able to go twice in a row. In the meantime, enemies will make their moves and adjust the turn order accordingly, and if you time your button presses right as they land a hit on you, you’ll take less damage as a result, just like in the Paper Mario Series. In fact, if you time it perfectly, you’ll even increase your attack multiplier by a small amount, so mastering the timing is key to ending battles quicker.

Outside of the exploration and battles, there are other modes that can be accessed outside of the story via the main menu. There’s the Arena Mode, where you can choose to fight very difficult bosses and their minions at any time, and an Endless Mode where you can choose a chapter and fight waves of all the enemies that appear in the chapter one after another until you are defeated. These aren’t much, but they are a great way to gain experience if you’re stuck on a boss in the main game, since you can jump into these modes at any point during the story.

In conclusion, Saturday Morning RPG is an enjoyable throwback to an era gone by, offering a good amount of replay value in the form of in-game achievements, secret boss battles, subquests, and the arena/endless modes. It may be quite different from a standard RPG, but in an era where a lot of indie RPGs from Kemco and other developers feel pretty similar to one another, SMRPG is a breath of fresh air six years down the line. From a really good soundtrack, fun exploration and battle systems complimenting the already excellent experience on offer, Saturday Morning RPG is a hidden gem that’s a must-own at this price if you’re up for a new RPG that’s a bit different from the norm, with a 1980’s setting and standard objects being used as weapons, all without going the easy route of copying Earthbound, and there’s not much wrong with it outside of how it can look a bit bland in parts and how the inability to run away from battles can make them very repetitive after long play sessions. Still, thanks to having both handheld and docked mode support and having all the achievements and content from the prior versions of the game, this is easily the definitive version of Saturday Morning RPG, and a great place to start if you haven’t already. It did take a while for it to click with me, but once it did I found myself having a really good time.