Thanks to Enhance for the review code

Being a remaster of a PSP launch title, the UI in Lumines still feels a lot like a handheld game, which leads to a lot of colorful and varied visual styles, thanks to the large variety of skins to unlock for the game and easy to use menus, along with cute animal avatars you can use during the game that are unlocked via in-game achievements.

Each skin comes a new track to go along with the visual style, although I found most of these tracks to be absolutely bizarre and strange to the point that most of them don’t feel like puzzle game tracks at all, mainly due to the fact that some of these sound like random acid trips, for better or worse. There’s also random rumble gimmicks you can turn on to fit with the music or the block drops, but on the PS4 at least these just feel pretty dull and aren’t that impressive, prompting me to only leave it on for block drops.

Lumines Remastered offers several modes for the player to choose from, with the Basic Challenge being the main game mode by default, acting as an equivalent to Marathon mode from Tetris. The main goal of Lumines is to create 2X2 squares of the same color, expanding them by placing two more squares on any open space before a line travels across the screen and erases them all at once. Two different colors are used in the game, and each 2X2 square tends to be organized in a way where you must carefully rotate and place them in such a way that they will lead to complete squares. Because of this, a lot of advance planning is needed if you want to clear a ton at once, since doing so will increase the score multiplier more and more as the squares continue to clear in large amounts. Rinse and repeat until you reach the top of the screen and game over, or reach a high enough level to “Beat” the challenge. There is a Skin Edit mode where you can choose any skins you already unlocked to make your own sequence for them, but outside of that it’s pretty much the same as the Basic Challenge.

With the main mechanics of the game out of the way, Lumines Remastered offers several modes where those mechanics can be put to use in several different ways. My favorite mode by far is the Time Attack mode, where you choose between 60, 180 and 300 seconds of time in order to clear as many squares as possible. This mode easily makes the game a lot more suitable for pick up and play, and while I found this a lot more engaging than the Basic Challenge, it still requires tons of practice to grasp the main mechanics of the game, although once you do get the hang of forming squares at fast speeds, it becomes a lot of fun and is perfect for quick bursts and competing on the leaderboards.

There are two other modes that are plenty of fun too, made entirely with a single-player focus in mind, and these are the Puzzle and Mission modes. Puzzle Mode is deceptively tricky, where it wants you to fill in a shape with a single color without any going over the boundaries or having the wrong color inside, but a great way to test your brain. The much more lenient Mission mode is like an extended tutorial, teaching you many ways to create combos by placing blocks in a certain order to fully clear them off the screen, before an occasional level that deviates from this by requiring you to either score a certain amount of points, clear a certain amount of squares, or break open columns in preset waves of blocks. Compared to the rest of the game, this mode is by far the one I had the most fun with, though annoyingly you have to complete all challenges on the current difficulty level to unlock the next one, even if you only have one tricky one remaining, which can lead to a roadblock sooner or later. 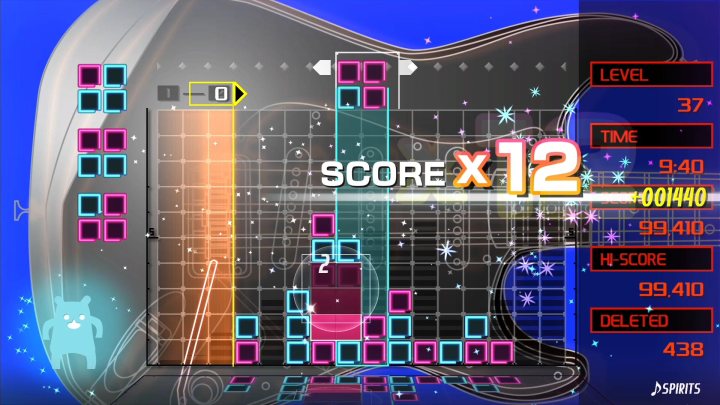 Speaking of roadblocks, that’s where Lumines Remastered‘s biggest problem comes into play, and that’s the fact it feels like the game is trying to roadblock the player from the mechanics instead of trying to help them. Outside of a very basic tutorial and the aforementioned mission mode, this game is really, really difficult. The climatic finish to this game and its evil difficulty comes from the Vs CPU mode, a mode that you may think would be akin to Puzzle Fighter, Magical Drop, Puyo Puyo and every other 2P puzzle game you know of, and in most ways it pretty much is, with the main goal being to get the CPU to fill the blocks up to the top on his side of the screen before they do it to your side by limiting their screen space while opening up your own. 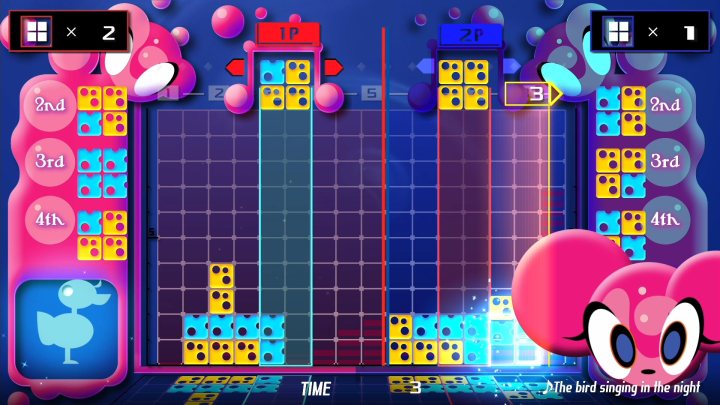 The main difference is that this mode becomes absolutely absurd with the difficulty starting from Stage 3. In this stage, I found that despite a slow, gradual pace for Stages 1 and 2, the difficulty decided to jump through the roof and out of space. Despite my best efforts as I tried to learn the ropes with the game, I kept getting murdered in no time at all, ranging from 50 seconds to 15 seconds. By some miracle I managed to beat the stage and thought it was just a surprising spike, but it gets even crazier to the point I couldn’t make it past the fourth stage, and I predict that if I made it to the final battle the difficulty would be beyond multiple universes. Luckily, there is a local versus mode if you want a more relaxed experience, but there’s no online play, unfortunately.

In conclusion, there’s tons to do in Lumines Remastered, but unfortunately I found that most of it lacked the hook that makes puzzle games so great. From an absurdly evil VS CPU mode, very tough to grasp gameplay and absurd unlock requirements for some modes, (requiring you spend at least an hour on the normal score attack to even get close to unlocking Endless Mode) this game is absolutely not the type that’ll hook you if you have no familiarity with it. Thankfully, the stellar Puzzle and Mission modes do a much better job of easing the player into the game than the actual tutorial does, the Time Attack modes are excellent for pick up and play, and if you work with it long enough you will have tons of challenging trophies to unlock.

Still, I do wish there was a bit of an easier way to ease yourself into the game, as I really wanted this to be the next addictive puzzle game I’d come back to in the same way I do with Tetris and Super Puzzle Fighter II Turbo, but I do hope this leads to a rerelease of the sequels in the future, and for those who do finally get the hook of this game, you’re in for a great time.

I give Lumines Remastered a 7 out of 10.