In this 1992 Arcade game from Data East, you take control of three players in a game show known as Nitro Ball, where the survivors get a grand prize! Riding off the Smash TV craze, this story is fairly basic and somewhat cliche, so per usual Arcade standards the story doesn’t really matter.

In a break from Johnny Turbo tradition, there are no screen options to choose from like in the other games, save for one that flips the orientation into vertical mode on the right side of the Switch. This is because Nitro Ball was originally made with a vertical monitor in mind, and similar to the Zerodiv and some Hamster arcade ports, the option for vertical mode is there to keep the original resolution intact and to prevent the bottom of the screen getting cut off like it would be when played horizontally. 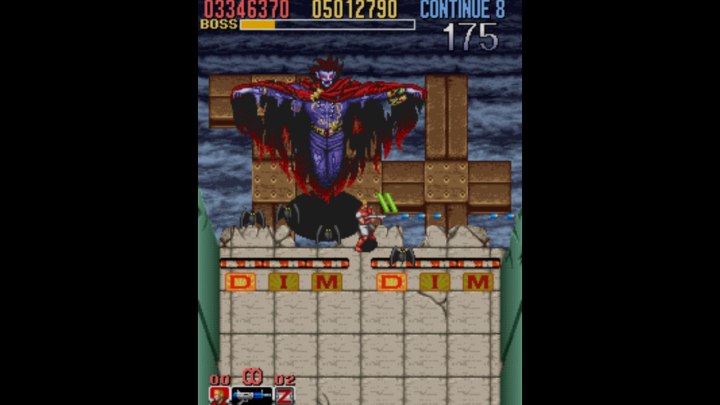 Unfortunately, there are a few problems with how the vertical mode was handled. For starters, the vertical orientation only goes to the right, and not the left. Not only does this make the game incompatible with the upcoming Flip Grip accessory, but it also comes off as pretty silly that it doesn’t offer both vertical modes since there’s no reason for it not to. There also seems to be a bit of a unremovable blur to the game regardless of the orientation that none of the video filters seem to fix, so the crisp pixels don’t show up even in vertical mode, which is a huge shame. Another baffling decision is that while the buttons on the right joycon do work as normal in vertical mode while attached to the Switch, the right stick can’t be used for movement, which is a huge missed opportunity since having the right stick move the player character would make this game fully playable in vertical mode with the joycons attached, so to see a simple mechanic not included is very unfortunate.

The actual game itself looks decent for the time, being a 16-bit overhead shooter not unlike the top-down segments in Super Contra, with lots of color and a surprisingly killer soundtrack that I honestly didn’t expect going into the game. There’s even some voice samples here and there which are surprisingly crisp considering the timeframe this game came out.

The main goal of Nitro Ball is for you and up to two other friends to go through the five stages of the game and defeat the boss at the end of each stage to move onto the next, all while competing against each other for the highest score. In fact, the hi-score aspect of this game is easily what makes this game easier to replay over and over again compared to other games, since the challenge of high score chasing isn’t from surviving on a single credit, (although you can do that as well if you wish) but rather from going through the entire stage and improving your score by taking advantage of the pinball mechanics to score Bingo Bonuses.

In each stage, there will be pinball bumpers and holes that you can take advantage of by getting someone to bump into it, whether it would be from shooting an enemy and having them roll around from the impact, or by getting a powerup that temporarily turns the player into a ball that can be freely controlled for a limited time before wearing off. Whichever way you choose, if you get a ball to hit a pop-up target, pinball bumper or into holes scattered around the field, you’ll gain a ton of bonus points, and sometimes you’ll even get a bingo bonus to trigger, where random prizes fly out for the players to collect for points. Bingo bonuses can even trigger during parts of the stage without any need of the pinball mechanics, usually by tasking the player to destroy a certain amount of enemies, clear the screen of obstacles, or go up a secret ramp in a time limit.

Once a stage is beaten, your score for that stage will be remembered by the game and thus when you register your high score at the end of the playthrough, each individual stage will have their own scoreboard, meaning that even if you only wanted to play one or two stages the scores for those stages will still be recorded when you game over. Of course, there’s also a total score that’ll be saved as per high score traditions, but the individual scoreboards are what make this game tons of fun, especially when the three player multiplayer is factored in.

I was only able to get one other friend to play through the game with me, but we had a ton of fun, even though the friend had no knowledge of the game or genre in general, it was still incredibly easy for him to pick up and play, and being able to ignore the pinball mechanics and play the game like a standard overhead shooter also helped to ease him into the game. Since the game only is around a half hour long and you can credit feed without penalty if you so choose, (it doesn’t impact the score at all) the main challenge comes from how you can increase your score with each playthrough. There are also bonus stages that can take place between each round if the roulette stops on a lit up digit, just like in real pinball machines, meaning that with more players, the chance that the roulette will succeed increases. These bonus stages are all about scoring points in a time limit, meaning that if you manage to get into these you need to act fast to beat your old scores.

In conclusion, Nitro Ball is easily the most obscure of the current lineup, but that doesn’t mean that the game is bad, since it’s an insane amount of fun especially in local co-op. With a huge focus on high score chasing, this is a game worth checking out for certain if high score chasing and co-op is for you. Don’t expect any sort of actual pinball controls, but rather, think of the pinball stuff as an optional puzzle to overcome for extra points. Unfortunately, the Johnny Turbo Arcade release could have been handled a bit better, with the continued lack of DIP Switches, (although in this game the difficulty is just right to the point that it isn’t as big of a deal here) limited options for the vertical display, no way to play in vertical mode with one joycon on the rail, and a strange blur filter all being baffling flaws to the emulation that would improve the entire package if these were fixed. Still, as the very first home release of this Data East gem, this is still worth checking out. It’s just a shame there wasn’t more love put into the porting.