This game’s presentation is the definition of generic, unfortunately. Using a 2.5D perspective, the walking blocks that you control are cute, but that’s about all they have going for it. Levels are presented with pretty generic backgrounds and some dull 3D textures, accompanied by what sounds like the most stock definition of a “Fun Summer Day” score, along with stock sound effects. The only other thing about this game that I thought looked passable was the world map, which changes color and appearance based on the world you go, looking better than the actual levels themselves.

The goal of a stage in Tetra’s Escape is to make it to the portal at the end of the stage with one of the Tetras in order to help them all escape, short cube guys that walk around on two feet. This is done by making pathways to the end of the stage by switching between multiple Tetras in play and having them shift into a tetromino shape to act as platforms for one of the tetras to make the journey, although they can’t undo their transformations by default once they have done so. 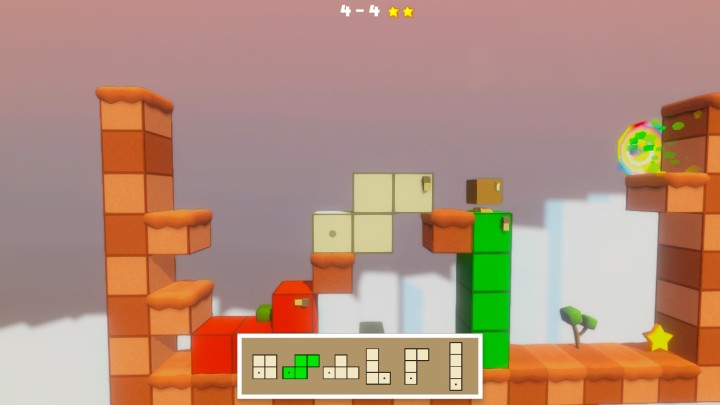 Each level contains three stars, standard for casual games like this, although in this game once all three are obtained a trophy appears, acting as a forth star in that you must collect that as well in order to clear the stage 100%. You can easily skip the stars by just making a quick path to the exit, but building a path that lets you get everything on the way is much more fun, and helps prevent the game from feeling monotonous, which it can get especially in the beginning when there’s barely anything that the tetras can do or interact with outside of shifting shapes. 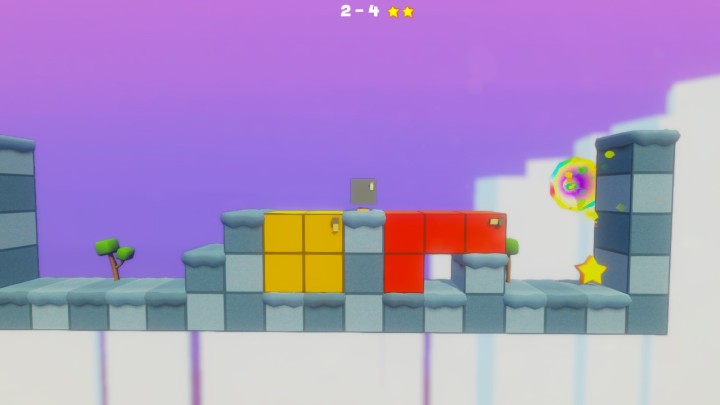 With each new world you unlock, you gain new abilities that add much needed challenge and depth to the puzzles, from being able to rotate the pieces with the shoulder buttons, flipping them to face the opposite direction with the triangle button, and being able to fall from a high place to turn into a solid block. While I appreciate that these mechanics help to try and keep the game fresh, the levels are still incredibly short even as they get harder, so once you figure out the solutions the levels won’t take more than a minute or two to clear, making the first few worlds a breeze, and they can be even easier if you choose to ignore the four collectibles which start off very easy to collect until you reach World 4, which is where I lost interest in the game due to boredom.

In conclusion, Tetra’s Escape is a puzzler that does offer up some mild fun, although this game still fails to use fresh ideas that would make the game addicting. While later worlds do benefit from having all the elements introduced and becoming very tricky as a result, the game can still be 100%ed with patience and practice, and there’s little reason to come back once you’ve done so. The trophies also do little else but act as stuff you can get on the path to 100%, so don’t expect replay value from them either. A logic puzzle that might have been fun on an online website or for cheaper, but as it stands right now there are tons of other puzzle platformers better worth your time, such as CRUSH, Mighty Switch Force among many others.