Thanks to NIS AMERICA for the review code

In this enhanced version of the PS2 original, you take control of Prince Lahral, as he awakens from a two year rest in order to investigate some strange situations relating to his deceased father, along with a conspiracy brewing from the angelic and demonic realms that seems to relate to a visitor named Etna…

The main improvement that Complete focuses on is the elimination of sprites in favor of the cel-shaded character art that Disgaea 5 sported, along with a more modern UI to match that game. In fact, outside of unique story-related characters, a lot of the art assigned to the classes are directly ripped from 5, and while that usually helps to keep things consistent, it doesn’t always work out in the game’s favor.

The most jarring error when it comes to this new art direction come from the intermission scenes that take place between each chapter, which parody the type of episode previews seen in anime and tokusatsu shows. However, whether by a goof or strange design choice, these intermissions use the original PS2 designs, with no effort made to update these scenes for the new art style. It’s very jarring and comes off as very lazy, although it did make me wish that there was a way to revert to the sprites through the options, just to see what they were like and to have both options available, as unfortunately for purists you’re stuck with the new art style at all times.

When it comes to other aspects of the presentation such as the voice acting, don’t expect much improvement on that front either. The English voices for the main campaign are exactly the same as the original PS2 release, meaning that the overly dramatic and low-quality recordings from that version of the game are still being used over a decade later. These voices range from really bad to decent at best, although I don’t think they’re bad to the point you’d want to turn off the audio altogether, and you can switch to the Japanese audio if you wish. It should also be noted that playing in Etna mode causes the cutscene voices to completely change and jump up in quality, since that mode was added in a later port for the PSP and thus had a different voice cast, adding to even more of a jarring difference.

Similar to Disgaea 2 and 5, Disgaea 1 Complete is a Strategy RPG, and being the first entry in the series, you can clearly tell that Disgaea 1 is several steps behind from the rest of the franchise, even with some UI/QOL improvements. For starters, you can skip an event with the X Button before entering a map if you don’t want to sit through it, but even if you are in an event or cutscene, holding ZR will speed up the text by a tremendous amount, which can be very helpful if you’re a fast reader like I am. 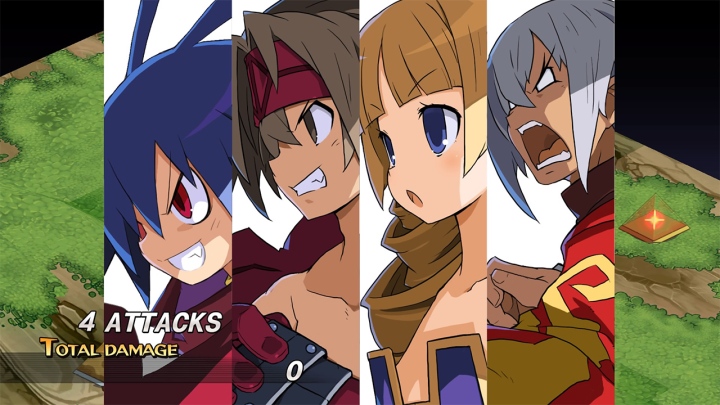 Over the course of the adventure, you’ll soon re-learn the mechanics that the franchise has thrown at you before. From team up attacks that take place if you stand besides an attacking ally, Geo Panels that grant benefits to select tiles of the map, haggling with the senators in order to improve the shops and adjust the difficulty of the game, to exploring the Item World and powering up items in your inventory, a lot of the common features seen in the franchise originated here! The game can move at a pretty speedy pace if you turn off all the animations, and while it’s not quite as fast as Disgaea 5, enemies can still sprint to you as soon as you end the turn if you want battles to go quickly, and just like in 5 the increased speed fits the portable nature of the Nintendo Switch very well. The combat, like always remains very enjoyable, with lots of different classes to choose from, per the norm for the series, and the overall adventure is just a blast to play. 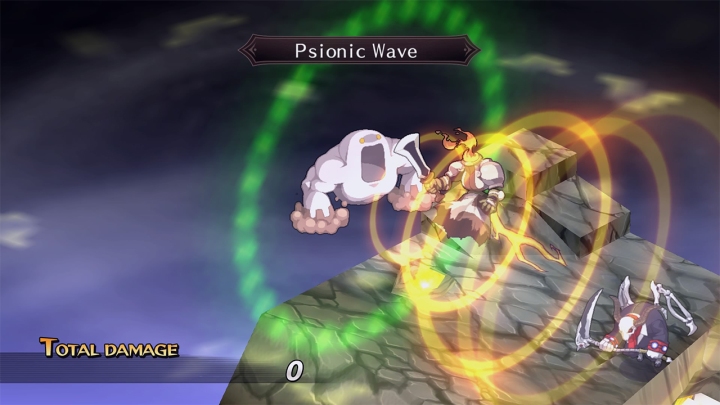 There’s even an unlockable mode where you can play as secondary protagonist Etna, which can even be unlocked right away if you enter a cheat code. This alternate what-if scenario is a shorter story than the main game, but this mode is also a lot more difficult to make up for it, and if you jump into it too early you might end up spoiling some important plot elements from the main campaign. 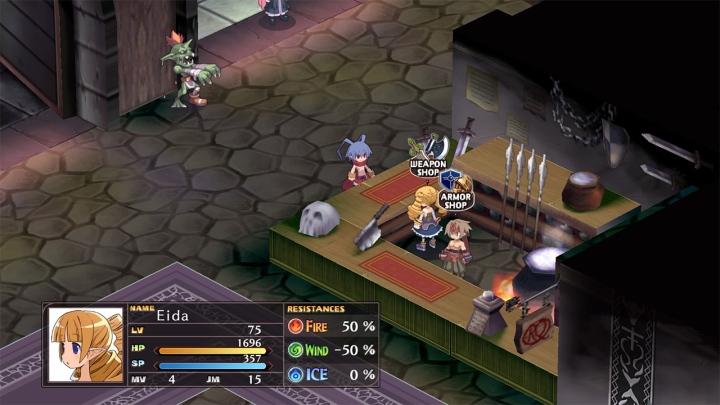 It should also be noted that as a result of this being a simple touch-up of the most recent port of the game, (Disgaea PC) there are still some old quirks from the original entry that apply here. Geo Panels don’t explode nearly as quickly as in newer games, so if there’s a map flooded with them, expect the process to take a while. Don’t expect anything exclusive to later entries, such as the level editor or even the option to make the camera overhead, and it seems this was directly based on the PC version since the end credits (triggered for me when I accidentally encountered a bad ending due to dying in an early boss battle) flat out say Disgaea PC.

Most shocking of all oddities though, at least from the Switch version’s perspective, comes from the complete lack of any in-game achievements to replace the PS4 version’s trophy list. Since 5 Complete, a few NIS America games have had in-game achievements programmed in and brought over to match the trophy lists on the Sony platforms, but all of a sudden it seems most of their output this year has lacked anything of the sort. I assumed it was simply because they were mainly porting games developed by other companies or just cutting out trophy lists that added little replayability to begin with, but with Disgaea 1, their very own IP lacking this handy feature to keep Switch owners on par in this aspect, it just feels like a big disappointment to have it totally absent without reason, especially since the PS4 version gets a trophy list that could have been brought over to Switch for more replay value. Don’t get me wrong though, Disgaea 1 Complete still has plenty of content on offer despite the lack of an in-game achievements menu, from both campaigns, all the bonus content and optional maps included in prior releases, and a few minor additions. so if you’re worried this game would be short on content, then rest assured that this will still easily be worth $50 in that regard.

In conclusion, Disgaea 1 Complete offers another enjoyable SRPG to the Switch’s stellar lineup. With two campaigns to go through, bonus maps to check out along with some UI enhancements, this is a very solid remaster of the original game. Unfortunately, the fact that this is just a basic port with new visuals and no way to even switch to the old sprites on a whim, along with how it doesn’t even include the in-game achievements the PS4 version has despite Disgaea 5 being the first NIS port to do so makes this far from the ultimate version of the game. In the end, Disgaea 1 Complete is still strongly recommended to those who enjoy the series and haven’t previously played the first entry, or those who just want to do it again after many years, or even those who love a good SRPG, but after seeing the high quality put into Disgaea 5 Complete to make it the ultimate version of that game that stands out from the original, it’s a bit of a shame that Disgaea 1 Complete is just the original game with a new coat of paint and minor UI tweaks. A lot more could have gone into this port, especially when regarding aspects like the untouched credits or the unedited intermissions.