Thanks to Retroism for the review code

In this enhanced port of the Arcade game Chuka Taisen, you take control of a monkey boy named Michael who sets out on a quest to defeat five bosses and gain the title of being the strongest fighter of them all!

Being an enhanced port of a retro game, you’d expect several options to tinker with to make the retro presentation really shine, from crisp display options and maybe some background options. Unfortunately, Monkey King doesn’t offer any options of the sort to speak of, none whatsoever. Luckily, the default display setting makes the base game look crisp enough, but every aspect of the original UI is placed on a border surrounding the screen, which cannot be altered or turned off in any way, shape of form.

After seeing the fantastic display options in Street Fighter 30th Anniversary Collection, the Arcade Archives lineup and the Sega AGES series, it’s beyond disappointing to see no options or anything of the sort for this port of the game, making this whole aspect feel half-assed at best. Luckily, the core game still seems to look and sound as close to the Arcade version, but a lot more effort could have been put into allowing for display options.

Being a horizontal shooter, Monkey King requires that you dodge projectiles and fire at any enemies in sight, with the standard one-hit death rule applying. Fairly standard for a horizontal shooter from the time, you press one button (B in this case, which is also the confirmation button for some strange reason) to fire. There’s no autofire in this port, so you’ll have to use a turbo controller or mash really hard if you want to make the most of your weapon’s capabilities. Luckily, you can upgrade it over time to increase the strength and speed of your shot, which eventually includes being able to make it a rapid fire shot. 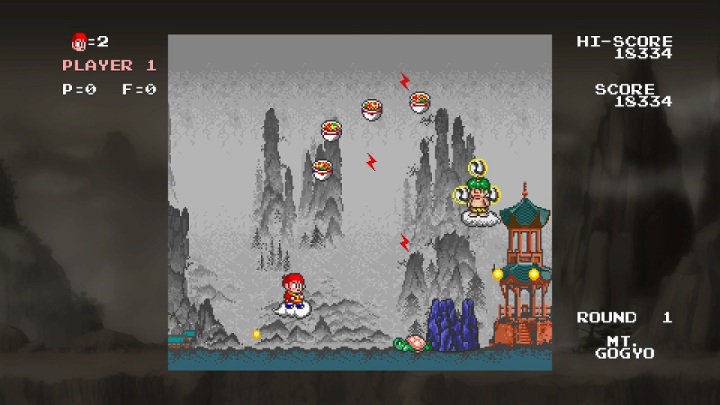 Besides the aforementioned lack of filtering options in this game, there’s little else when it comes to any other type of options, unfortunately, with the only gameplay related option available being the ability to increase your life count to 9. However, since this game uses the Gradius style of respawns, (in that you get sent back to a checkpoint instead of respawning right where you left of) these lives don’t really do anything about the difficulty whatsoever, especially with infinite continues at hand and checkpoints few and far between.

In fact, this port’s biggest problem is that like the Johnny Turbo’s Arcade series, there’s no DIP Switch options or any customizable assets outside of the life counter in any way, shape or form, with not even button mapping as an available option. However, while the JTA games at least left the games on default difficulty and included save states, Monkey King has the game’s difficulty cranked up to what feels like the most absurd level. I’m not joking when I say this might be the most unfair and cruelest shoot em up I’ve ever played. Enemies shoot homing projectiles non-stop, and despite my friend and I’s best efforts to make it to the end of the first stage after dozens and dozens of deaths and memorization, we just couldn’t make it any further than right after the miniboss. The small screen space makes it stupidly difficult to dodge projectiles. It’s one thing for enemies to shoot as they come along, but it’s another for those enemies to shoot multiple times and with such speed.

There is a two player co-op mode, which is what I tried with my friend after failing constantly in the singleplayer to see if anything would get better, but even this mode is downright cruel, since you actually can respawn in the same place you died, but only if the other partner remains alive for a ten second cooldown. This makes things a lot more frantic and not even another buddy was able to help me beat the stage, but at least I was able to make it further to the point I was able to check out the special weapons of this game, which can be used with the A button and absolutely decimate enemies. It’s just a shame that they still try so hard to decimate you, and when I have more difficulty with this game than beating the first stage of Last Resort on max difficulty, then something’s not right. 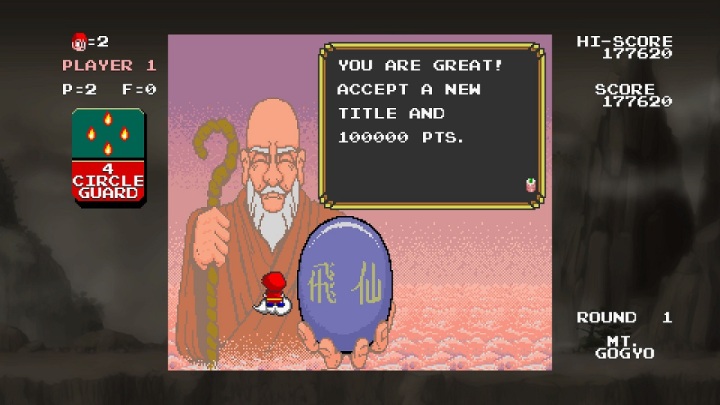 Last but not least, there’s online leaderboards for both the single and multiplayer modes, allowing players to practice and aim for the highest score. Despite the ridiculous difficulty, there’s still some fun to be had from chasing and improving your old scores, meaning that at the very least, you can try and try for a higher and higher score, even if it’s not likely that you’ll make it past the first stage with some crazy luck.

In conclusion, Monkey King is by far the most barebones retro game port I have seen on the Switch next to D/Generation. Save for handy online leaderboards and the option to increase your lives, there’s little else of importance to speak of, from a locked border, a great (but also locked) display option, no DIP switch or difficulty changes, or really anything extra that could have made this port more worth it such as a gallery or new levels, this is a really disappointing release with quite a bit of balance issues. It would have been nifty if the SMS and Famicom versions of the game were thrown in as a bonus, but sadly that wasn’t meant to be either.

While I’m all for retro rereleases being more common, (And thankfully, without the god awful smear filter the JTA series include) there needs to be a lot more care into making them as accurate as the original game while also adding a lot of QOL features. At least we got online leaderboards and everything runs well enough, and the game’s only $5 which makes this the cheapest of the retro rereleases available, but also one of the weakest. With all that said, I’m game for Retroism to rerelease tons of other obscure titles such as this in the future. I just hope that there’s a lot more features and effort put into them.