Going for a colorful pixel art style, Hackyzack doesn’t really offer much of note to discuss, going for a look that has been done time and time again. The perspective of the stages is a bit too zoomed out for my tastes, but overall it does look serviceable. The audio on the other hand can be downright grating. While the background music doesn’t come off as either memorable or forgettable, the character voices that play whenever you jump or kick the ball around can be beyond irritating due to how often you hear them. Some characters such as Zack aren’t too terribly bad, but if you try playing this in co-op with the secondary character Mym, prepare to hate this game’s voice direction with a passion, with high pitched yelps and wails playing non-stop.

Hackyzack offers one of two modes, each with their own sets of stages to clear. At first you can only access the Goal Mode, which is the main mode of the game, and tasks you with kicking a ball around in order to have it come into contact with a yellow wall. This is done by moving around and aiming your trajectory with the left stick, double jumping and wall climbing with the B button, and finally using the Y button to kick the ball. Each stage tends to have places outlined that acts as walls or barriers for the ball, but not for the player, which means that each stage is a mini puzzle that requires quick reflexes in order to get the ball to the goal, which is easier said than done, since this game does not fool around or take any time to ramp the difficulty up to extreme levels.

From the very first world of the game, you’ll be doing daunting tasks, such as activating switches with the ball in order to open doors, kicking the ball over pits that will kill you if either you or the ball fall into one, and making sure that you stay safe when doing the riskiest jumps to aim properly. Unfortunately, this game has two major problems that make these tricky levels less fun to play than they should be. The first comes from how your aim is shared with your movement, when a dual-stick option would have been greatly beneficial. Sometimes I want to jump and aim up, but I also have to go right or left in order to cling onto a wall. The fact that I have to manage both aiming and moving with the left stick leads to levels which would be a lot more simpler and fair if there was a dual stick aiming option of some sort, but due to the awkward control scheme it just gets more infuriating and not as fun to play with. There are new balls that you can unlock in order to help ease the pain a little bit, but they can be just as tricky to obtain as a new character. 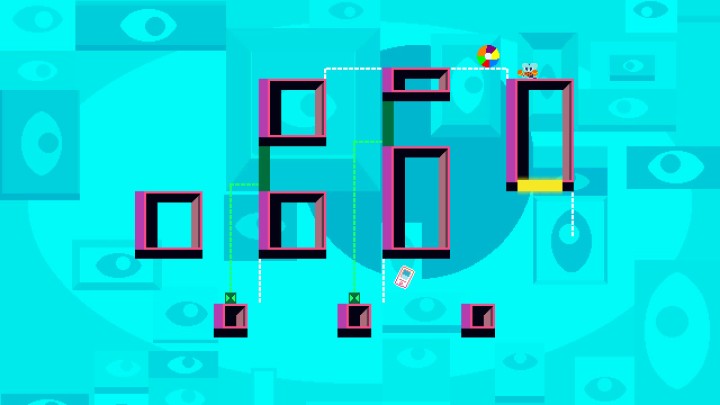 The second, and by far the biggest problem comes from constant framerate issues. In handheld mode, the game would stutter and drop frames seemingly at random, which combined with the tricky controls and need for precision would lead to even more misfires and deaths for me, along with a generally unenjoyable experience. Docked mode was slightly bettr, with the framedrops not happening nearly as much, but they’re still bothersome when they do and overall this is a really inexcusable issue to have persist within the game, unfortunately.

If you collect stickers littered throughout the stages in Goal Mode, you can unlock the corresponding stages in Target Mode, a secondary mode where the main objective is kick the ball and break every crystal in the stage as fast as possible. I actually found this mode to be a lot more entertaining, since it’s all focused on speed and aiming, with a higher rank rewarded for hi-speed play, although like the Goal Mode stages, these become extremely difficult to complete as they progress, and if you want a perfect rank then you practically have to be a god. Still, since this mode is also how you unlock new characters, it was a very nice diversion, although you may not be able to get far in this mode due to how insanely difficult the stickers are to get.

You may think that clearing normal stages can be tricky with these controls at first, but having to go out of your way and get a ball to and from a dangerous area where the sticker is can be even worse. This is by far the hardest part of most stages in HackyZack, and considering how it unlocks more stages in the mode that ends up being ultimately entertaining, this is a huge shame.

In conclusion, Hackyzack is a game with a clever concept of combining physics, platforming and sports, but unfortunately said concept doesn’t work well in execution, with a ludicrous difficulty spike that makes co-op practically unplayable without true mastery of the game, and a clunky framerate that just doesn’t want to stay consistent in handheld mode. Considering how this game requires absolute precision in platforming and kicking the ball around, these framedrops along with some inconsistent difficulty are gigantic flaws that pretty much destroys any hope this game had of at least being a fair but decent challenge. It’s a shame, too, since the first world was decent enough despite the absurd difficulty, and Target Mode is a great test of speed, only for all the other worlds in Goal Mode to throw that concept out the window. I love a good challenge in a platformer, but when the game performs poorly and is combined with some questionable difficulty, it just doesn’t lead to a fun game.