Thanks to Radial Games for the review code

Going for a basic art style, RRR looks decent, with five backgrounds to choose from, each with a different arrangement of walls and obstacles to deal with. There’s really little else to look at outside of a barebones menu and a few different designs for your Rocket, so there’s little else to discuss. The music is forgettable, with a techno track that loops in the menus along with a few other tracks you can choose from during matches which I can barely remember.

RocketsRocketsRockets is a multiplayer party game where the main goal is to fly around an open arena and shoot down the opposing rockets to win the match. Each ship has their own attributes that determines how fast they fly, how good their shields are, and how they use their weapons, so the gameplay and controls are very simple to get the hang of.

Flying around in the maps, you not only shoot down the opposing rockets with a normal shot, but also manage to destroy them by placing mines behind you and dropping bombs underneath. Each ship has several health points known as “Bubbles” and once a ship has been hit, the player who managed to deal damage to that ship will gain an extra bubble back. Once all bubbles are lost, you’re out of the game, but if you’re playing with more than two players and have the option turned on, you can come back as a ghost to disrupt the remaining survivors, so there’s that at least.

With that out of the way, there’s only a few game modes to discuss and they both focus on the simple mechanics I described above. You have a simple quick play mode, where the aforementioned shooting action takes place with up to four players, and a “Zen” mode, a pretty worthless mode where you simply fly the rocket around with up to four players and just explore the stage. There’s no combat or anything in this mode, it’s just flight, which makes this mode feel pretty pointless since outside of learning the basics of flight without any punishment, there’s little else to this. 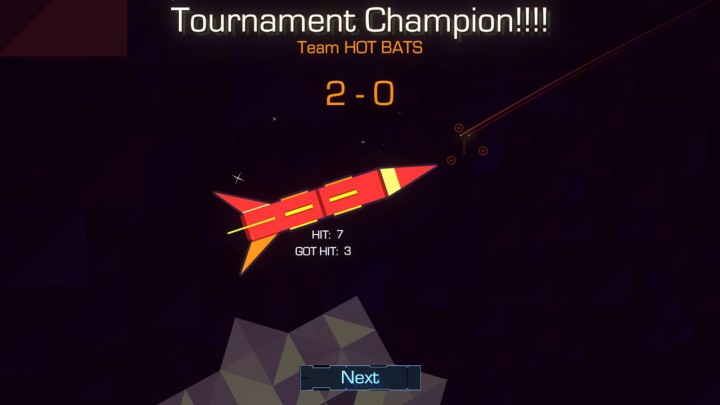 That just leaves the Tournament mode, where the local multiplayer aspect is pushed the most. Here, you and up to four friends can compete in a few different settings to see who comes out on top. Either by competing to see who can get the most kills in a time limit, or by who wins the most games in a set of rounds. I found the options here to be not nearly as fun as the simple fun of Quick Play, so me and my friend stuck with that after giving modes like Elimination a shot.

RocketsRocketsRockets aims to be a budget multiplayer game, and it clearly shows, for better or for worse. While the main game mode it has on offer is incredibly solid, and did provide some enjoyment for a friend and I, it really didn’t last that long due to the limited amount of stages and modes. There are a few settings you can tweak with in the game’s option menu if you wanna go crazy with only one bubble, or make things drag on with seven, along with toggling the random powerups that can appear every now and then, but this game only managed to keep a core concept burning strong with little else to show.

For $5, this is a decent value if you have friends over a lot, which is at least more than other local only games that charge too much for too little such as Flip Wars, but you don’t get much else here. An ideal purchase with gold coins or leftover eShop funds, but not something worth rushing out to get an eShop card for unless you have a party night frequently.