Thanks to for the review code

In this action platformer, you take control of a young boy named Lucas, who ends up discovering that alternate worlds filled with round eyeball creatures who are at risk at invading his universe! With the help of a scientist who gives him a handy hook, he sets out to explore several countries in order to destroy the creatures.

Right away, this game starts off on a rather iffy note, going for a menu that’s not even preceded by a title screen. Rather, this “menu” is controlled like an actual in-game level, where going left will continue the game or start a new one, and going to the center can bring up the options.

The menu is rather unconventional and seems like a strange way to do a menu, but that could be forgiven if the game looked decent enough and was creative in how it was done, but unfortunately Spheroids just looks downright ugly. It doesn’t go for a pixel art style, which as you know would usually give it some recommendation points from me, yet somehow they managed to make the game look even worse.

It’s tough to explain exactly what’s wrong with Spheroids’ look, but the easiest way I can explain it comes from how the main character looks like something out of a voxel game, yet the enemies are flat, two dimensional drawings that clash badly with the main character. Combine that with a repetitive, looping soundtrack that only changes after each world, and this game’s presentation feels both cheap and poor.

The main goal of Spheroids is to guide Lucas to the teleporter at the end of each stage, jumping and poking through the obstacles that block his way. Like any platformer, you have to learn to jump carefully, avoid enemies and pits, and stay out of danger. The gimmick with this game comes from how the main method of attacking is by using a pointed hook, just like in the game Pang. This means that when a hook is launched either up or down, anything that touches it will pop and either split into half (if yellow) or pop entirely. (red/certain other enemies) 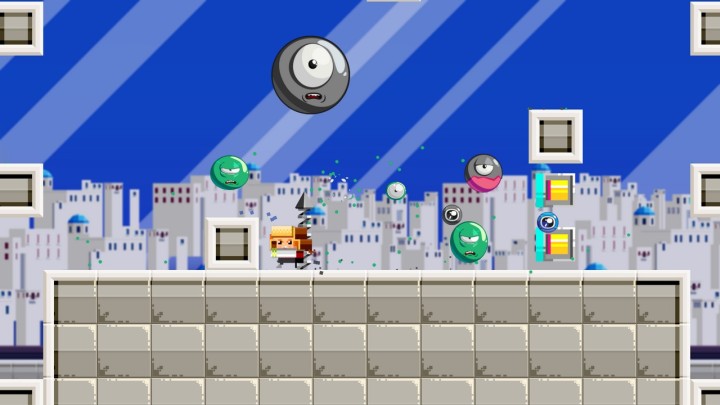 Because of this quirk, the game will occasionally lock you in a battle room that tries to emulate the feeling of one of those Pang stages, but they don’t really offer up much to change things up from platforming, so they really end up feeling like nothing more than filler. There are checkpoints throughout each stage, and dying just sends you back to them with little to no penalty, so it’s really a case of trial and error for each stage, despite the medium level of difficulty starting out. 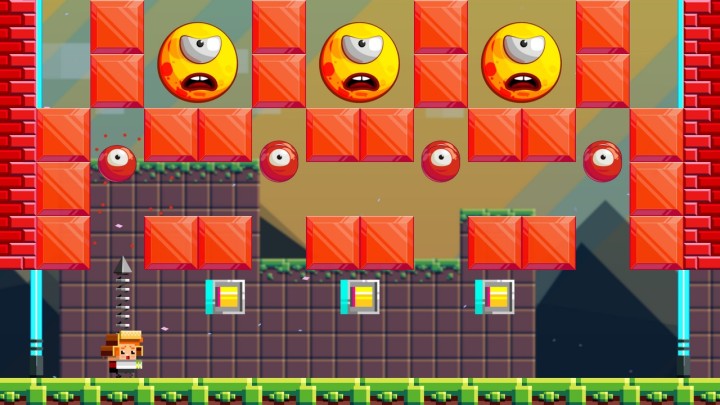 Between each world, you’ll even learn a new skill that goes into the rest of the game, from a grappling hook, being able to spend cubic gems to buy upgrades, or even going into the foreground for some stage gimmicks. These don’t really offer much, although the upgrades do help reduce the repetitive nature just a little bit, despite how clunky some like the grappling hook feel. It doesn’t feel like a modern Bionic Commando or a smooth swing, but rather a strange, wobbly wire that’s tough to control. 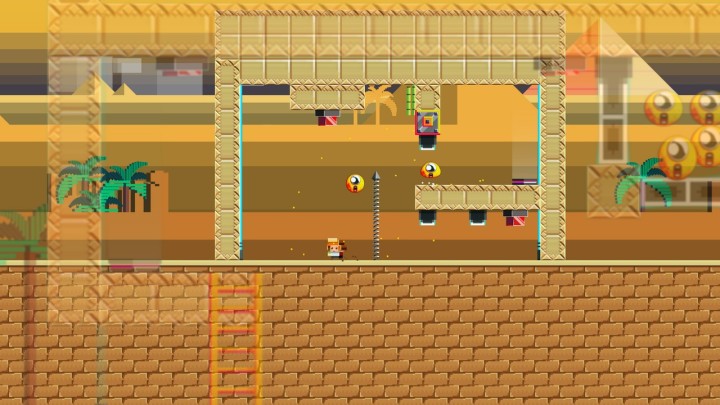 By far the biggest problem I had with Spheroids is that it’s just too boring. The first few levels are your usual tutorial, I get that, but even when the new mechanics and upgrades are thrown in the game just feels dull and directionless. You have average platforming bits surrounded by Pang elements that only work just barely, and with the lack of engagement, this was one game I grew bored of and dropped despite my best efforts to clear the third world in hopes of seeing something interesting.

In conclusion, Spheroids is a platformer that has an interesting idea, but blending two types of games together just doesn’t work well here, since the blend barely feels like a mix and rather just two formats stacked on top of each other. From boring level design, mildly interesting gimmicks and annoying music, this was a game that I ended up quitting out of sheer boredom alone, something that doesn’t really happen often, unfortunately. You have plenty of other options for platforming action, and Pang Adventures just came out recently if those elements were what appealed to you the most. It’s at least a game that has some merit, albeit not much to count.