Thanks to Screaming Villains for the review code

In this remaster of the 90s FMV game, you take control of someone monitoring an estate, being put in charge of monitoring traps and stopping a strange cult from breaking into the building, while also helping a boy named Eddie get out of his basement. Yet all is not as it seems…

Being an FMV game, the video footage is what you’ll be looking at for the majority of the time, so there’s really not much to say about how the game itself looks since it’s mostly said footage, remastered akin to how Night Trap was handled, with several UI options based on various versions of the game.

Seeing how this was filmed a few years after Night Trap, the source video held up a lot more as well, since there was hardly any noticeable changes in the video quality or any audio oddities like in Night Trap, so (which resulted from very old and damaged film in a few small parts of the game) everything here sounds crisp and benefits from good upscaling.

The four UI options on the other hands, are hit or miss. Granted, these are based off of the UIs from the previous three versions of the game, along with a brand new one made for this release, but only one of them ended up being one that I found easy to use, and that was the Mega design, based off the original Sega CD version. The UIs for both Saturn and PC end up making the room descriptors a bit harder to read, and when toggling on the animated icons they becoeme a lot tougher to look see in those UIs, compared to the Mega and modern ones.

Speaking of the modern UI, it’s easily the worst of all of them, for one very unfortunate reason. You see, switching between rooms in any other UI will just change the display image to show what’s in that room, but in the modern UI each room has its own separate monitor, so it jumps from one room to another by swaying the camera. Considering how the second act of the game can get so hectic to the point that you’ll be switching rooms constantly, seeing the camera sway back and forth between rooms is not a pleasant feeling in the slightest.

Double Switch, similar to Night Trap, tasks you with activating traps at the right moment in order to capture intruders in the estate building. However, unlike Night Trap, which was a consistent sequence of events where memorization would help significantly, Double Switch adds a few random aspects to the mix. While the story will still play out the same every time, requiring that you trap key people at certain points, the intruders that enter the building come and go as they please, appearing in rooms at random points during the game, and just like in Night Trap, if you fail to catch enough intruders or if someone important to the plot dies, you’ll get a game over. 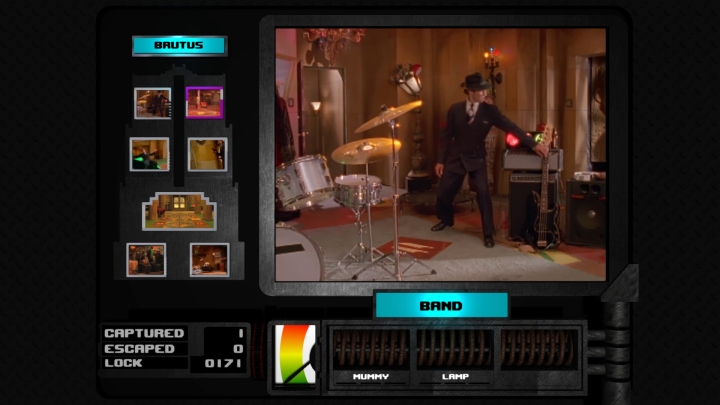 As a result, all the intruder scenes will repeat frequently because of the randomness. There’s no visible timer either, so the story related events can easily take place at the same time as an intruder scene, making it mandatory that you focus on the story over the distraction, since you can’t do an absolutely perfect game this time around. (although you can still get as many as you can to improve your ranking)

The other big change in feel compared to Night Trap comes from how the trapping mechanic works. While in Night Trap you only used one button to trap foes at the right time, in Double Switch you have three trap buttons available per room, with one of those three unlocking over the course of the second act of the game. You also don’t time the button press with a glowing indicator, since Double Switch will play a sound effect from the Dualshock speakers right as someone steps on and trap, letting you know the perfect time to spring it.

However, memorizing exactly what each trap looks like is up to you, and you have to press the trap button three times to arm it before being able to activate it. This “charge” carries between rooms so you could arm two traps at once, but if you try to arm too many at once the meter and traps will reset due to an overflow of power, so you have to carefully choose which ones to prepare ahead of time To shake things up further, sometimes you’ll have to de-arm traps during parts of the story, for they can get hijacked, something that took me a few tries to figure out due to how sudden the game throws this on you.

Speaking of which, Double Switch’s game flow is a bit on the rocky side compared to Night Trap’s more simplistic 2 half structure. You have three acts this time around, totaling at around 30 minutes or so, with the first and third act being roughly 10 minutes or so and the second act being anywhere from 15-20 minutes. Each act serves as a checkpoint, so if you get a game over you only have to continue from the beginning of the act.

The problem here comes from how Act II’s length and tricky story moments lead to it being the most frustrating part of the game by far. Granted, this was an aspect from the original version of the game as well, but it’s quite frustrating that a simple mistake in Act II can easily lead to 10+ minutes of progress being gone, which makes the addition of animated icons for each room a godsend.

In conclusion, Double Switch is a very good remaster of a decent FMV game. While I didn’t find it nearly as charming as Night Trap, Double Switch felt more complex and engaging than that title, but it also suffers from a pretty harsh difficulty bump near the middle of the adventure. Like with Night Trap, there’s a bunch of pre-production bonus content to unlock if you do well in the main game, but it’s heavily dependent on your rank, which means that just beating the game once won’t make it an option, which is unfortunate due to some of the cool pieces of trivia hidden away for masters only.

Still, this was an enjoyable FMV game that made me compelled to play to the end, and while I don’t feel as willing to replay this constantly like I did with Night Trap, it became a quirky experience worth giving at least one playthrough.

I give Double Switch: 25th Anniversary Edition a 6 out of 10.