Thanks to DANGEN for the review code

In this metroidvania adventure, you take control of a priestess from a far off forest who sets out to investigate the source of monsters who have invaded her land. While there are a few story bits from NPCs and bosses along the way, there isn’t much in terms of a serious plot and it doesn’t really require any knowledge of the other games in the Momodoria series as a result.

This game goes for a similar pixel art style that Momodoria III used, but with far, far more polish. The animation frames have increased, along with the overall detail, with more vibrant environments, new enemies, and a UI that is much easier to deal with than III’s. Even as a standalone product, it looks stunning and runs at a very fluid pace. The soundtrack isn’t half bad either, with well composed music from start to finish, although a lot of it does feel like the sort of ambiance you’d recognize in an early Metroid game.

Being a metroidvania, Momodoria plays a lot like your typical action-adventure game. You jump with the B button, attack with the Y button, and you can assign your Bow/Arrow combo or your dodge roll to the A or R button respectively. (Unfortunately, the ZL/ZR buttons do nothing in this game, which means that the L and R buttons are the only shoulder buttons with a function in this game and you cannot map them to the back triggers.) Over the course of your adventure, you’ll gain upgrades which will allow you to access new areas, and you can even find secrets, from equipable items to hidden collectibles known as Ivory Bugs, which can be exchanged for even more items. 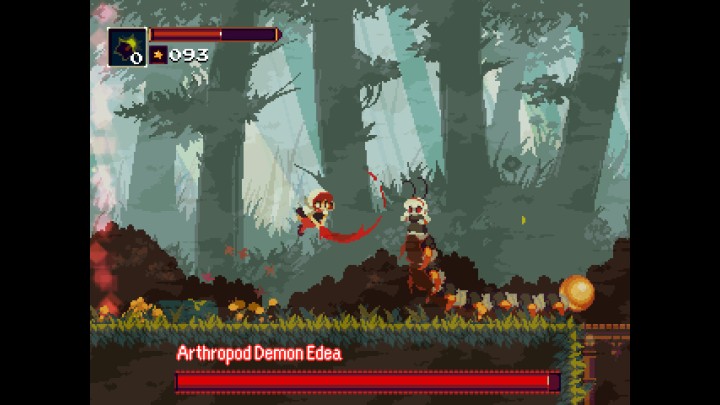 Combat is a very basic three hit combo, and for the entirety of the game you’ll be stuck using your leaf for melee attacks. While it doesn’t lead to much variety by itself, you can mix things up a bit by using jump attacks and charging your bow and arrow for long-range moves. Most enemies in the game won’t put up much of a fight, although it’s still very important to know what each one is capable of so you can dodge and counter attack accordingly. Near the end of the game, you get an ability that’ll let you transform into a cat, which allows you to use your leaf to attack at a faster rate, in exchange for being unable to use your bow or any other items besides the transformation one, so combat still remains simple.

The bosses are when your skills are truly put to the test. You could take care of them by reading their movements, countering and using your items to give buffs or to heal yourself, but if you manage to hold out just long enough that you can avoid taking a single hit of damage, they’ll give you some really helpful items upon defeat. These can range from equipable items that can give massive stat boosts, to an item that can absolutely murder the rest of the bosses by summoning powerful attacks from the sky. However, each of these consumable items can only be used a select amount of times before having to be refilled at a save point.

Still, the flexibility in the items along the sheer amount of them to discover on the map makes it really enjoyable to hunt down as much as you can, and if you look hard enough, you can even find a special item that will unlock a true final boss, along with another item that can trigger a secret boss fight, so there’s quite a bit to do in this compact world. Add New Game Plus along with four difficulty modes and this game does have a bit of replay value to offer even after you aim for 100%.

In conclusion, Momodoria is an excellent Metroidvania, and an adventure with a lot of charm that’s definitely worth owning on the Switch. Each area is just long enough to not overstay its welcome, and I was absolutely hooked throughout my four hour adventure as I grew motivated to 100% this game, and that was all just on one playthrough! With a few features to encourage multiple playthroughs, this game is absolutely worth buying whenever you can, although there is one oddity that makes this particular version tough to recommend: the price.

For some reason, Momodoria is $15 on the Switch eShop, while it’s $10 elsewhere. There doesn’t seem to be any exclusive content outside of a tiny bit of HD rumble, so it’s baffling why the price is a bit increased. Granted, the game was incredibly enjoyable and I was actually surprised that it *wasn’t* $15 elsewhere due to the quality of it, but this odd switch tax is questionable at best, so this particular version doesn’t really have much on offer to warrant buying it for a bit extra if you already own it. Still, if you only have a Switch, or prefer all your Metroidvania action to take place on the system, this is still worth a buy solely due to how damn fun this game is, despite the relatively short length, it’s one of the most polished Metroidvanias I’ve played in a while, and a stark jump in quality from III.

I give Momodoria: Reverie Under The Moonlight an 8 out of 10.