In this action platformer from the same devs behind Odallus, you take control of Zaku, a warrior who sets out to take on an evil organization known as Oniken in order to save the world!

Just like with Odallus, Oniken manages to be a gorgeous looking NES tribute. While it’s not as detailed nor as pretty as that game, the spritework is still pretty good, although there are some moments where there’s weird sprite rotation or scaling that breaks the authenticity of this being a NES era game, so it’s not quite up there, and sometimes looks like a flash animation, for better or worse.

Like with Odallus, the game also has a CRT filter that’s decent, though it really messes up the look of this game. The cutscenes that play out inbetween stages, Ninja Gaiden style look great with this filter on, but the game itself is a bit blurry due to the fast pace of the stages, making it tough to see projectiles or certain enemies from time to time. Like with Odallus, there’s no way to disable this, and a patch was also promised for this title, though it’s not out. The music also fails to impress, since it has a bad habit of looping incorrectly and being pretty forgettable in general, save for the stage transition themes and the first half of Stage 4.

Oniken plays like a mix of Strider and Ninja Gaiden, being a homage to those challenging, fast-paced platformers. Zaku can move around, attack with the X button, (?!?) jump with the A button, and enter a powered up berserker state with the B button. These controls are honestly pretty terrible, and I cannot believe someone playtested this game and thought those controls were a good default. Yes, X and A feels somewhat similar to Y and B, just a bit higher, but it’s so unnatural having to play a fast-paced action game that encourages constant jump attacks and even using your secondary weapon with a control setup like this. 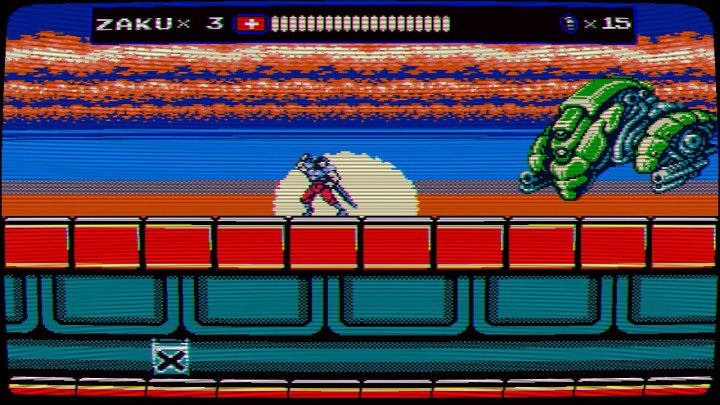 Thus, the controls were by far my biggest challenge when it came to playing this game. I could see a well crafted, enjoyable game. The first level was great, and the second level started off with an OK shooting section akin to Wave Man’s stage in Mega Man 5, before continuing into a fun raid on the ship, but my journey came to an end near the end of Stage 2 (a third of the game) due to the controls.

Being based off old NES games, it shouldn’t come off as a surprise that Oniken is difficult and will put up a fight, which is why the odd control scheme makes playing this game REALLY tough when things start picking up. Learning when to dodge and memorize boss patterns is important, and that definitely isn’t a bad thing at all. However, when the aforementioned filter can make some projectiles come out of nowhere, along with the need to jump and attack constantly in the case of the Stage 2 and 4 bosses, Oniken’s current state makes the game a lot more difficult than it has any right to be, which is frustrating considering how obvious it should have been to not have such a bad default control scheme.

Luckily, I managed to find a temporary solution for the controls, and that was to plug in my Hayabusa Arcade Stick (which also acts as a turbo controller) and having the X button be automatically pressed by default. This made moving a bit tougher since you do stop whenever you swing the sword, but not having to use the same clunky button layout and only having to focusing on jumping made the game a lot more enjoyable, even though the filter still made the visibility iffy.

In no time I made it to Stage 4, just barely close to the end of the game, only to hit a wall at the Stage 4 boss when my strategy wasn’t really as effective due to how clinging onto surfaces worked. Since this boss shoots waves of fire that require constant jump attacks and super quick precision to avoid, something that wasn’t so easy with my turbo solution, I was unable to get past this boss with the current control scheme, which is a big shame.

In conclusion, Oniken is a solid throwback to fast-paced platformers like Ninja Gaiden that suffers from an incredibly stupid control scheme and a botched port. What should have been a no brainer, easy-to-port game ended up being this weird experience with a mandatory filter on that can make some parts of the game more difficult than they need to be, and a control scheme that whoever designed really needs to regret.

A patch was promised to fix the issues, akin to Odallus‘ upcoming patch, but those features should have already been in this version day one, especially having a control scheme that at least makes some sense. It’s odd how years ago I ended up “reviewing” the original Oniken’s awful Mac “Port” on a whim due to how it made the experience of enjoying the game more difficult due to all the problems that caused, and now I’m finally able to check this game out only to realize that this port also has issues, but at least none as bad as the Mac port’s framerate dipping.

Considering how this version is also double the pricepoint of the original Steam version for some baffling reason, I think you should definitely wait for the patch and maybe even a sale on this one if you’re remotely interested. You can have a decent enough time once you’re able to get past all this, but it’s still not an excuse for how the port came out this way, especially since this game has a lot of great ideas buried within.