Thanks to PM Studios for the review code

In this compilation of three strategy RPGs, you take control of three bands of mercenaries who set out to save the world three times over. Despite the fact that all the stories are linked together, there’s really nothing much of value to be found in these games plot wise, since the plots in these games are really, really uninteresting, which is really disappointing. If either of them had a good hook from the get-go, I think it would have gone a long way in helping improve the overall story.

The Mercenaries Saga series was a group of games that originally launched on mobile back in the day, and unfortunately it shows. While the pixel art does look really, really good at first glance, there’s really not much animation or any sort of appealing effects to speak of. In fact, one of the first things you’ll notice in all three of the games is how the whole map takes place on a floating background, kinda like what Disgaea does, but unlike those games, the backgrounds and even the maps themselves look incredibly simplistic and barebones, and they don’t get much better throughout the games, usually with a background that sticks to one color scheme for the entirety of the adventure, and maps that look as generic as can be. At least the character portraits are decent enough.

It should also be noted that the menus are very, very clunky and not that fun to navigate at all, which is very odd considering how they look like your typical menu, but just don’t function that way at all. Combine that with stilted story scenes and lame music, and this is a collection that offers a disappointing showcase of events, as all three games don’t seem to improve much from each other. To make matters more disappointing, the cutscenes move at a weird, choppy framerate and they only look better if you fast forward through everything, and this is the same for all three titles. The game boasts that some improvements from 3 were carried over to the new versions of 1 and 2, but considering how the presentation still feels very jank and clunky, it makes me wonder how on earth it’s considered an improvement.

From the title screen, you can choose between any of the three titles: Mercenaries Saga: Will of the White Lions, Mercenaries Saga 2: Order of the Silver Eagle, and Mercenaries Saga 3: Gray Wolves of War. For the sake of this review and what I managed to get out of this collection, I stuck to the first game primarily, while going to the third game a bit as well to see what improvements were made, and dabbling into one mission from the second game to see what that entailed. In general, the Mercenaries Saga series tasks you with building up an army and guiding them throughout the three stories contained in these three separate titles, with the ability to take on some optional missions known as Free Battles if you so choose.

Combat takes place on an isometric grid, not unlike Final Fantasy Tactics, God Wars or Disgaea, and once you place your army to get them ready, the battle begins! Unfortunately, I could notice some problematic aspects of the game right away, since the controls and overall pacing of these games are horrendous. There’s an option to speed things up text in the menu, but that won’t help when it comes to how long these turns seem to take, even on a small map.

You see, the game’s default control setup for the isometric tile movement is just not good at all. Usually games like these would offer two options for how you’d like to control the cursor, but Mercenaries Saga only gives you one that’s really, really bad, and takes a lot to get used to, so an extra control option for the perspective would be really nice since some bits of scenery like fences, barrels or trees can obstruct the player’s view and make it tough to pinpoint where to go next, so there were times when I sent a character to a tile off from where I thought it would go due to the locked perspective causing the tile to be obscured by an obstacle of some kind. 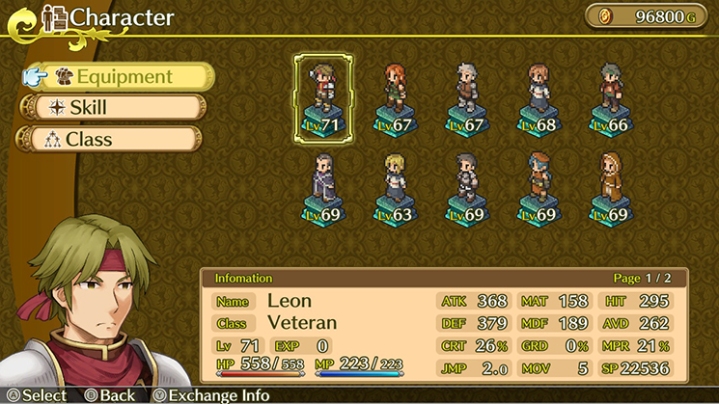 Besides the clunky controls, the games just feel haphazardly made in general. Yeah, once you deal with the abhorrent pacing of the battles and the weird control scheme, you do get a decent battle system with several classes to use, skills to learn, and even new items to synthesize or discover by looking for chests or hidden treasure. Placing a unit on a tile will allow you to point them in four directions, and as per the norm if you or the opponent manage to strike someone in the back they’ll take extra damage, so there’s some strategy on which direction you face, too. But the slow, slow slow pacing and how a battle with only 7 enemies in the first game ended up taking 20 minutes due to how slow the movement and animations are just killed any enjoyment I was getting from using higher level skills or searching for items. 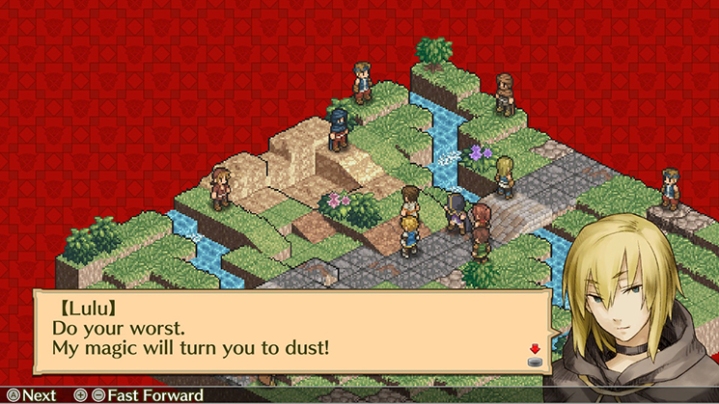 In fact, because of the pacing, I was less inclined to randomly check any strange or suspicious tiles since the time it would take me to get back to the group of enemies would be not worth the effort, so I just used any items or skills I had that would pinpoint them for me, and I would only go for the ones close to me. I tried a battle in Mercenaries Saga 3 right after the aforementioned slow battle in the first game, with the same settings turned on in hopes that maybe the pacing or flow would be greatly improved, (you know, since it is a sequel ported to a higher end system like the Switch) but alas, the same problems showed, leaving me to suspend the battle and I had to practically force myself through a good portion of the first game and some free battles to make sure I saw some of the elements this series had to offerm since that was the one I made the most progress in. I thought Legna Tactica was boring and not a fun strategy game at all, but the part that pains me about Mercenaries Saga is that these games do have fun elements to them, like the combat and the cool way that you can spend more MP to use a stronger version of all your skills, leading to some more risk and reward. But the presentation and pacing just makes these titles a chore to play, and I wish some more QOL improvements were added to make these a much better fit for the platform.

In conclusion, Mercenaries Saga Chronicles is a collection of games I just couldn’t get into. Within a few missions in each game, I’d find the game’s awful pacing and clunky controls to be a big frustration, and each time I would move onto the next game, hoping they would be better and improve on the prior installment with some handy quality of life features, I would be disappointed and bored to death. Repeat once more, and that’s my experience with Mercenary Saga Chronicles.

If you must check this game out, then I at least insist that you check it out via the eShop for the $15 price. The retail version isn’t bad at all, but it’s double the price, and these games are just not worth spending $30 on when you can get much better strategy games for the same price or less, and even spend a bit more for the superior Disgaea games, which flow a lot better, offer better camera controls and are just way more fun.

While I was hoping for a retro themed strategy RPG, what I got instead were a bunch of mediocre games that never engaged or did much else besides that. Maybe you can get past the clunky controls or weird directions, but I just can’t, and I’ve tried for months to get myself to play these a bit more in order to see if they get better, but they never do. The sad part is that I know these games could be fun, since the battles were enjoyable when they weren’t taking an eternity due to pacing, and something like being able to turn off animations or speed up the battles like you can the cutscenes would have significantly helped make this collection the definitive editions of these games. If you don’t mind extremely slow and painful pacing in your strategy games, then I actually do recommend you give these games a look, since you’ll be getting a lot of content for the value. Just not in the way you expect.

I give Mercenaries Saga Chronicles a 5 out of 10.