In a world guarded by the Holy Sword, corruption is afoot when the rift protecting the sword breaks open, and evil bursts into the world! With the surface and firament in danger, a man named Len sets out on a journey to find his missing friends and help the Tetrarchs defeat the darkness!

Out of all the Kemco RPGs I’ve played thus far, this one by far has the most detailed story, as cutscenes interrupt the main story almost constantly whenever a new main story mission starts up, with text dump after text dump. While the story is more detailed than the spoiler free blurb I gave, I don’t think it’s really worth nearly the amount of text that the game throws at you. I think if there was a way to speed up the dialogue for fast readers or for those who already played through bits of the story, it would help a tremendous amount with the game’s pacing.

Being a Hit-Point game, the production values of this game exceed those of your average EXE Create game, and for this particular game it even exceeds their typical quota! Sprites are far more colorful than in Chronus Arc and their animations are sharper too. Battle sequences have better backgrounds, and the game as a whole feels so much smoother. Considering how the original version of this game launched in 2018, it makes sense that it feels the most modern, but after playing through several older Kemco RPGs this felt like a great breath of fresh air. Combine that with awesome battle themes and a solid soundtrack, and you have a great presentation.

Legend of the Tetrarchs takes place between two overworlds, where it follows typical Kemco RPG fashion in that you go from objective to objective to progress the story. You have your standard first person battle system that’s the norm for Hit-Point RPGs alongside the option to increase the battle speed, so jumping into a battle and figuring out what to do is quick and to the point. Tetrarchs‘ main gimmick comes from using certain skills known as “Carmina” which can be equipped to your characters as you find them in dungeons and towns.

These skills provide a variety of helpful attributes to your team including extra stat boosts, regenerating Health and SP, among other things. Each character has their own signature skill while also having up to two slots to equip the ones you find in the overworld, so finding pairs that work in battle can help a lot. Sidequests make a return as well, though unlike any other Kemco RPG I’ve played thus far they’re all done in the menu. While you may get a new sidequest from doing something in a town, actually clearing the sidequest and collecting the reward is now done through simply opening the menu as soon as one is cleared and claiming the reward. This is a great improvement since being able to have all your quests in one spot without having to backtrack all over the place makes them a lot more enticing to do. 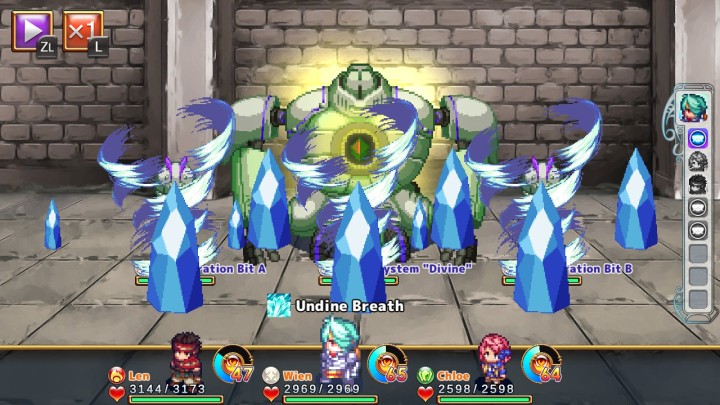 So with a good battle system and plenty of things to do, Legend of the Tetrarchs would seem like a no brainer in being like Justice Chronicles in the sense that it’s a must-play game with not much in the way of gripes, but unfortunately I do have a few with this game. The aforementioned text dumps that you can’t skip through are a thing that might turn off some players who aren’t as invested in the story, (With how long it takes to describe some simple events it can be a test of patience for some) and the fact this game has the biggest focus on story compared to any other Kemco RPG I’ve played to date may make it feel like a completely different beast compared to the more simpler games. Personally, I don’t mind the bigger story focus as outside the text dumps I feel it contributes greatly to helping the game feel more distinct from being yet another fantasy RPG.

That being said, there is one gripe that is a bigger issue for many people and it comes from a trend from recent Kemco Titles: DLC Boosters. While Hit-Point RPGs never really had as much focus on in-game currency and lotteries as the EXE Create games, a few still had something along those lines, and in Legend of the Tetrarchs they’re gone entirely. On one hand, it helps the game feel much more balanced, since I felt the pacing and difficulty curve was very fair and enjoyable enough to keep you on your toes without being insanely easy or punishing, so you don’t ever feel like you’re missing something or have to pay to win, but the fact that they replace this old system with eShop DLC packs that grant the option to triple experience, remove encounters or deal extra damage just feels really wrong, mainly in the case of the encounters since being able to adjust them was a feature of many, many other Kemco RPGs from the start and having to now pay for that option just doesn’t seem right. The developers must have felt this way too as the remove encounter DLC is $1.99 while the other two are $4.99.

The other two DLC boosters just comes off as aid for players who are stuck or need some help, which sounds good on paper due to how well balanced the main game is and how it never comes off as unfair for anyone with prior experience with RPGs, but the fact that paying $5 for triple experience points is a thing just comes off as a really pointless option for a console game in 2019. I’m beyond thankful the main game is great fun without ever having to spend an extra dime, but when you’re spending $15 on this game already, asking for more just to have an option back that was in other games comes off as a poor decision.

In conclusion, Legend of the Tetrarchs was a big surprise for me. While I felt that Justice Chronicles was the high point of Hit-point, Tetrarchs comes pretty damn close, offering a lot of the QOL features that the other Hit Point RPGs do while also focusing on just being a fun game. With a great combat system and speedy battles, this is a fun RPG that shows off a noticeable quality bump from Kemco’s other recent titles, thanks to being one of the newest ones to get ported (this originally launched in 2018, so not too long ago) If you get past the heavy amount of cutscenes and the continuing trend of DLC that shouldn’t really exist though, there is a hidden gem of a RPG to enjoy, and I truly do recommend it for those wanting to play a bite sized RPG. If you must pick one Kemco RPG for your switch, make sure it’s this one!

I give Legend of the Tetrarchs an 8 out of 10, and you can check out the game’s store page here.