In this overhead shooter, you take control of a Princess who sets out across ancient japan to find medicine for her crush! Despite the title, this is actually just a port of the Kiki Kaikai spiritual successor Heavenly Guardian, so there’s nothing here that wasn’t in that game.

Being a port of a PS2/Wii game, Snow Battle Princess is displayed in a 4:3 window at all times, covered by a border. Unfortunately, despite the many, many retro rereleases that give you the option to toggle these kinds of borders on or off, the border in this game stays on at all times, which is a big gripe. To make matters worse, you can’t even adjust the image in any way, meaning that what you see in these screenshots is what you get when it comes to pixel quality and the like. For a rerelease, this is as barebones as you could possibly get.

When it comes to the in-game visuals and sound, they’re pretty lackluster, with poor sprite art and a few memorable tracks of audio here and there, although the good majority of the soundtrack is really generic sounding. This game has a few annoying visual quirks as well, which impact gameplay for the worst. The biggest of these by far comes from how the game scrolls. Typically in any scrolling shooter, there’s enough screen estate to show you what’s up ahead before you get to that point, yet here in Snow Battle Princess sometimes you’ll be just barely near the vertical edge of the screen only to run right into an enemy. This is just frustrating game design, which is a shame as this sort of stuff didn’t happy nearly as much in the actual Kiki Kaikai series.

Alongside the pointless deaths that’ll come from the screen, there’s also a bunch of slowdown, and not the traditional kind either. Yes, some moments when you fight a few of enemies it will feel like your average case of classic game slowdown, but it can actually get far, far worse. I’m talking worse than Gradius III levels of slowdown, since whenever you use your special move, a bunch of projectiles will fall from the sky to freeze enemies. Sounds fine, unless the enemy wave consists of literally dozens of them attacking you all at once. Whenever this happens, (and it will happen a lot!) the game will slow down even more to some of the craziest speeds I’ve ever seen in a video game.

Apparently this was a thing back in the original version as well, and it amazes me that they didn’t try to improve the worst parts even a little bit. I’m just totally bewildered as to how a game like this could run so poorly at times, even though it’s not really anything to do with the system! You’d think that since these enemy waves are scripted someone would have noticed this and at least hoped to tone the slowdown a little…

Being your typical top-down shooter, Snow Battle Princess tasks you with clearing each of the game’s main stages, by using a simple control scheme of moving, shooting, dodging and using your special moves. It’s fairly standard for a shooter so controlling this game isn’t that tough. Defeating enemies will lead to them dropping snowballs (your special move ammo) or point items. Each of the stages in the game are pretty long for a shooter, which would be a good thing if the stages didn’t feel like they had lots of padding and pointless dead ends. Some stages are a total maze while others are just too spacious, making some parts of the game feel like a belt scroller in terms of a tedious “stop, attack then advance” gameplay loop. The Bosses aren’t that great either, mostly being bullet sponges for you to use your remaining snowballs on until they die. 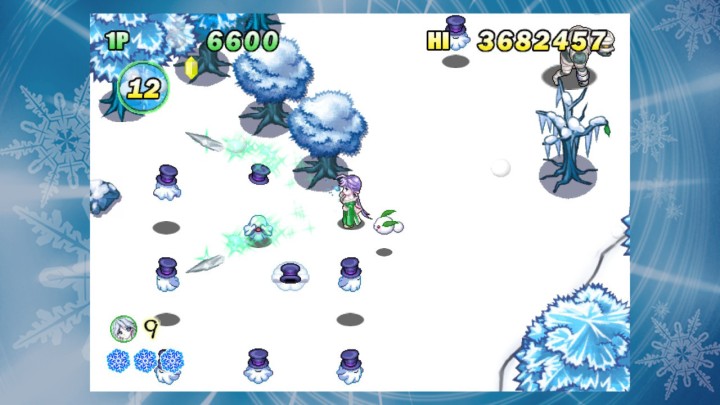 You do have three hit points before you die, and you can also raise the amount of lives up to 9, but besides that and a rumble toggle there are no options whatsoever, which is pretty disappointing considering the nature of this being a rerelease. There is a boss attack mode, but in order to even access it you have to find a hidden ghost in each of the gane’s stages, and that extends to the second loop as well. Yes, this game has a second loop, and while that’s normally fine for a score chaser just like this, here it just makes the game drag on and on due to the fact that you need to clear this second loop in order to properly complete the game. Not to mention there’s little of interest in the first loop to begin with, so why bother repeating the tedium? 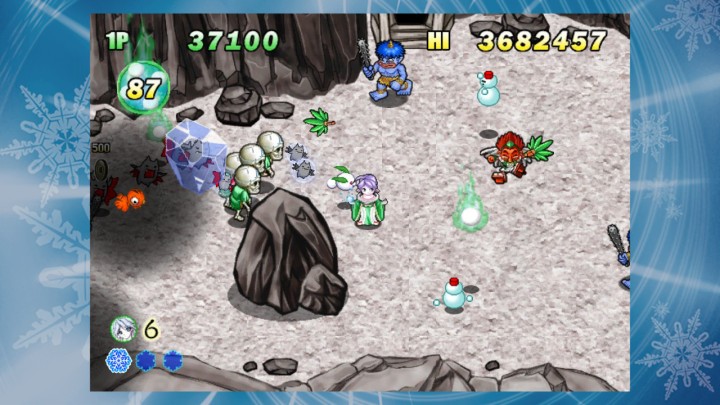 Yes, tedium is abound here as it’s the nature of this game, with the bloated levels, the maze-like nature of it, and the sheer amount of padding in this game, likely done back when it came out in an attempt to make it feel like a fully priced retail game. Well, even though this is a downloadable port, the game still isn’t that fun to play, and honestly I think that Snow Battle Princess would have greatly benefited if the levels were shorter and to the point just like in the Kiki Kaikai games.

Unfortunately, Snow Battle Princess ended up being so tedious that I really, really didn’t want to play past the third stage, so I left it like that. As someone who really enjoys score chasers and shooters, this was a really big heartbreak for me, after hearing some decent things about the original PS2 version. However, when compared to other similar titles like the original Kiki Kaikai or Pocky & Rocky with Becky, I can’t in good faith recommend this at the $15 price tag it goes for on the eShop. Not only is the game overly long and dull, but not even two player co-op helps save this game from being the tedious mess that it its.

In an age where indies and even some Arcade Archives titles have offered much more of interest for top-down shooter fans, this just feels horribly dated and not fun in comparison. Add the fact that it’s a barebones port as is, and you have a poor port of a poor game.

I give Snow Battle Princess Sayuki a 4 out of 10.