In this compilation of four Mighty Switch Force games, (technically three) you take control of officer Patrica Wagon as she sets out to catch some criminals before taking on blazing fires! There’s really not much of a story to any of these games outside of intro and ending cutscenes, but they still all feel connected.

Being a compilation of several games, it’s to be expected that they would all differ in some way depending on their age. Thankfully, the four games chosen for this collection have aged very well when it comes to the presentation, being based off of their most recent versions. You have the original 3DS Mighty Switch Force that started it all, retaining the original pixel art style that still has great animations and an amazing soundtrack, along with the fantastic Mighty Switch Force 2 which is based on its Wii U port, then you have the oddly redundant Hyper Drive Edition which is based off the Steam/Wii U upgrade to the original game which adds in extra stages and a new art style, (one that honestly looks a lot goofier than the pixel art of the originals, which is probably why they didn’t do that for the sequel) before the collection is capped off by Academy, the former Steam Exclusive entry with a multiplayer focus and a weird design choice to display the entire level all on the same screen.

As mentioned above, all of these games benefit from a stellar soundtrack, with Mighty Switch Force 1 and 2 having the best tracks by far. The pixel art for those two games holds up great as well, which is especially surprising since the original Mighty Switch Force has never been rereleased until now. It kinda seems redundant that there’s two versions of the same game in this compilation, but considering how the Wii U version has exclusive Hyper Stages that haven’t been done in the original art style, I can see why they threw the HD version in as a bonus. Academy on the other hand still has a great soundtrack, although a lot of assets are reused from the original 3DS game, (along with some new, very out of place voice clips) which is a bit of a shame since I feel it would have benefited from more unique sprites.

All four games use the same control scheme, and with the exception of some slight differences in 2, they all feel equally tight to control. You jump with the B button, shoot with the Y button, and use the back triggers to switch the platforms around. These platforms go in and out of the background, and with good timing you can use it to speed through stages, as this is a crucial skill! In 2, your shot is replaced with a water hose, but besides that the game feels just as responsive. The main goal of each game’s stage is to collect five girls (whether they be escaped prisoners or people in need) and take them back to Patrica’s robot companion at a certain part of the stage. Some stages have him show up where you start, while others have him show up in a hard to reach area or further along in the stage. Each level has a par time to reach, and while it’s very doable to reach that par time before you beat the games, it’s recommended that you wait until you beat the game to go back to do them, since you’ll get an upgrade to help breeze through obstacles and bulky enemies. 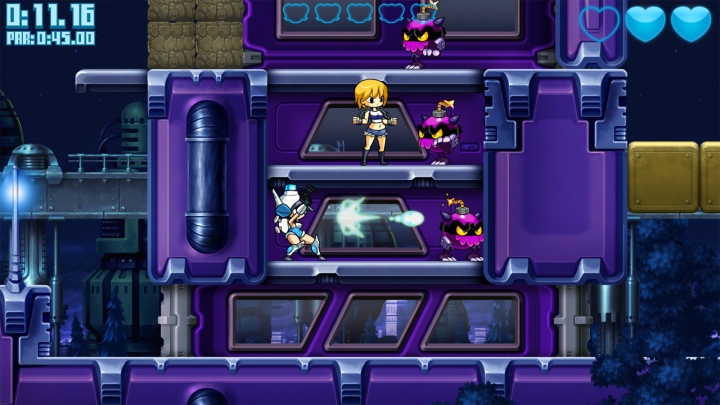 As you progress through the game, new mechanics are introduced, from blocks that will stay in place if you stand on them while switching, blocks that can shoot you across the room, and doors that will unlock upon killing certain enemies. Each game will merge these mechanics more and more as time goes on, leading to some very challenging and enjoyable puzzle action across all four titles, which makes each stage very rewarding when you finally figure out the solution. With the basics out of the way, let’s break down each and every single game, and look at their overall pros and cons to being included in this compilation. 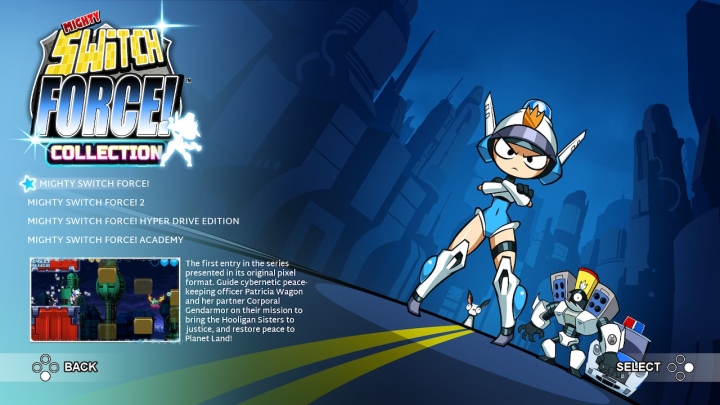 Mighty Switch Force: The original 3DS entry, based on the May 2012 patch that added five bonus stages to the game. The one that started it all, each stage is very well made and this is easily one of the best puzzle platformers I’ve ever played, holding up just as well today as it did eight years ago! Introducing a bunch of series staples such as transparent blocks, breakable platforms, and shooting arrow blocks, this 21 stage adventure is still a very enjoyable romp, as even if it can be beaten in an afternoon, getting the par times will require absolute mastery of the mechanics. The pixel art honestly holds up a lot better than the HD remake in my book, which makes this original version super nostalgic to revisit! 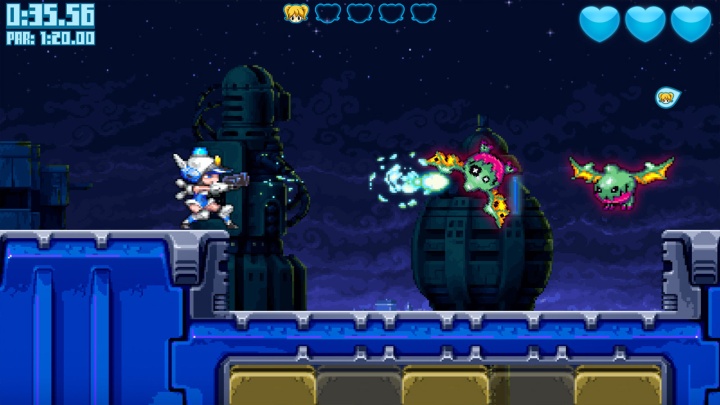 Mighty Switch Force: Hyper Drive Edition: Originally a Wii U port of the original game with extra levels and a new look, this is based off the Steam version of the game, which is identical. Now alongside the main and bonus levels, you have a bunch of hyper levels to tackle, which are all pretty challenging and will push your skills even further. However it should be noted that each version has their own save file, so prepare to play through the first game twice if you want to 100% the entire collection. (though if you want to get to the exclusive levels, start with this version first!) Besides a goofier artstyle and the bonus levels, the games are pretty much the exact same, although you can swap Patrica to her pixel art look if you wish. (but everything else will be in HD) 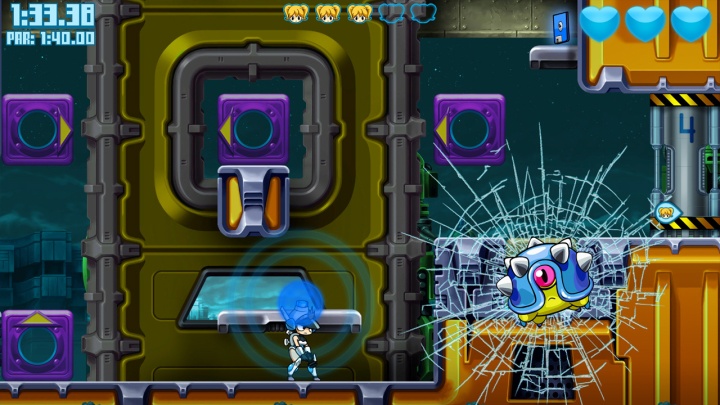 Mighty Switch Force 2: Ditching her gun in favor of a water hose, Patrica now has to put out fires and rescue people in need! The same general mechanics return from the first game, but with a focus on putting out fires there are a bunch of new gimmicks too, which leads to a more puzzle-focused experience. Only sixteen stages are playable this time around, though each of them has a hidden baby to find alongside the missing girls. The replay value comes from the par times, and just like the first game it’s rather short, but very well made and worth 100%ing, as it’s arguably the best game in the entire compilation. 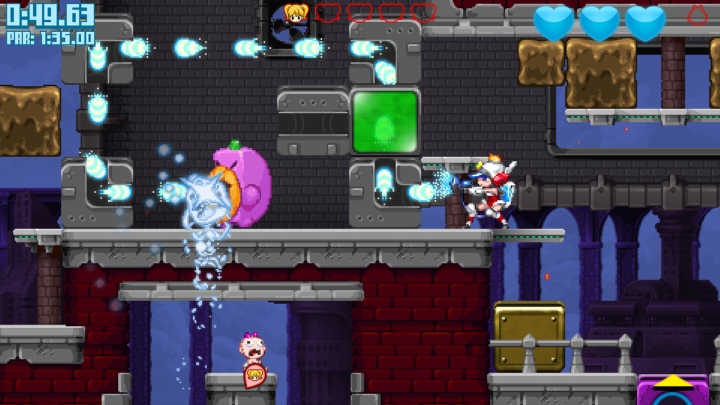 Mighty Switch Force: Academy: The weakest entry in the franchise, this odd multiplayer focused spinoff has over twenty stages, and while the game pretty much plays like the first game, the zoomed out view makes this one a pain to play in handheld mode, making it a much better fit for TV mode. The multiplayer is a fun concept and there are still par times to tackle both solo and in multiplayer, but the puzzles aren’t nearly as strong and while the cyberspace theme of the game is cool, it’s not really executed that well. On the plus side, you do get repeat levels from the other games now envisioned in this big-screen style, and the five they picked work perfectly with this zoomed out style. Still, it’s far from a proper third entry in the series, and I honestly feel this one was only thrown in as filler, which makes the omission of the other spinoff (Hose it Down, a puzzle game based on Switch Force 2 for iOS) very strange. 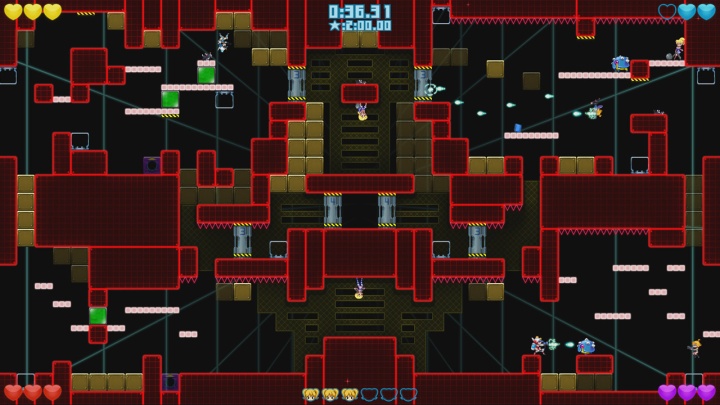 In conclusion, Mighty Switch Force Collection is a fantastic compilation of Wayforward’s puzzle platformer series. Containing the two major games, along with a remake and a spinoff, this is an almost complete collection, only missing that aforementioned puzzle game, which I honestly wish was added to supplement Academy. The controls are incredibly tight and just as responsive as they were in the original games, and with some of the best level designs in puzzle platformers, this compilation is a no brainer for its $20 pricetag, considering how the HD remake and Academy cost $10 each, and the other two were $6, leading to a $12 savings!

Even if you choose to ignore one of the versions of the original Mighty Switch Force, you’re still saving money, and having this series all in one place is a fantastic step to introducing newcomers to these indie classics! It’s just a shame that Hose It Down is absent and Academy is a pretty weak outlier, but hopefully this paves the way for another compilations with Flip Champs and the other remaining Mighty games, or even a third Switch Force!

I give Mighty Switch Force Collection a 9 out of 10.