In this action brawler game, you take control of a group of students from one of several different schools, and head to the streets in order to be the champion of all the schools! Each group has their own story mode, but there really isn’t much in terms of actual plot, so honestly if you were hoping for something engaging or worth reading, you won’t find that here.

In my River City Girls review, I mentioned how before that game came out, most of the newer River City/Kunio titles would use the same old NES sprites plastered onto newer backgrounds for their entire presentation, not even bothering to really add anything new to the art style. River City Melee Mach also falls into this category, using the old NES sprites for all the characters and pairing them against strange looking 3D backgrounds.

To be brutally honest, I don’t like how this game looks, since I feel these two aspects clash together so badly that it can sometimes look like a fan project. Sure, the sprites still animate just as good as they ever did, but it’s a real bummer than the backgrounds are as bland looking as they are, doubly so with the game’s soundtrack being just as bland. And the saddest part is, the OST is filled with familiar Kunio themes across the entire franchise, so it should be amazing, but the instrumentation they used to remix all these songs is just so boring that I found myself wishing for a way to turn on the original chiptune music instead.

The game has several different play modes, though they all tie in together due to using the same control scheme and sharing a common objective. River City Melee tasks the player with picking a school and going to brawl with rival classes and schools to see who ends up on top! 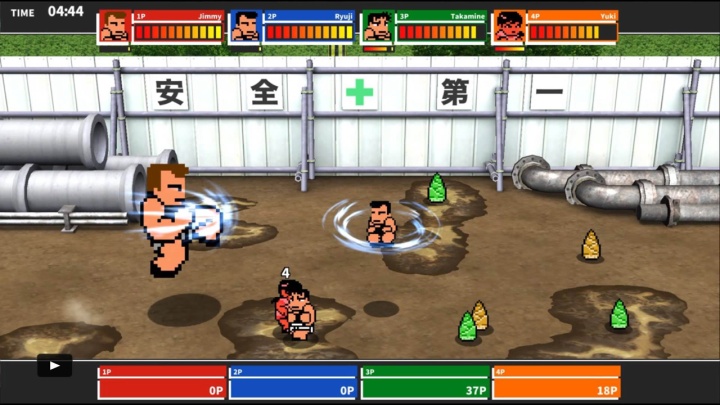 Battles can be broken up into rounds, and each round allows the player to switch from one member of the school to another, usually leading to a ceremony where the points from all the rounds are added up to equal the winner. You have a basic punch and kick command, just like the original River City Ransom, and you also have a separate jump button, just like the Arcade versions of Double Dragon. So if you have experience with prior Technos games, then the controls should feel right at home.

Alongside your standard attack moves, each character has their own special move, which can be performed depending on their circumstances, although these aren’t always made clear. Billy and Jimmy from Double Dragon are here for example, so their special moves are the same as in their game, with a mid-air spin kick and a knee jump attack as their special moves. Another reliable set of attacks you can pull off across all characters are throwing moves, where you can pick up a knocked-down character with the punch button, then hold the stick in a certain direction and press the kick button to do a powerful throw. Combining these attacks with the stages and powerups while using them to the best of your ability is the key to victory. 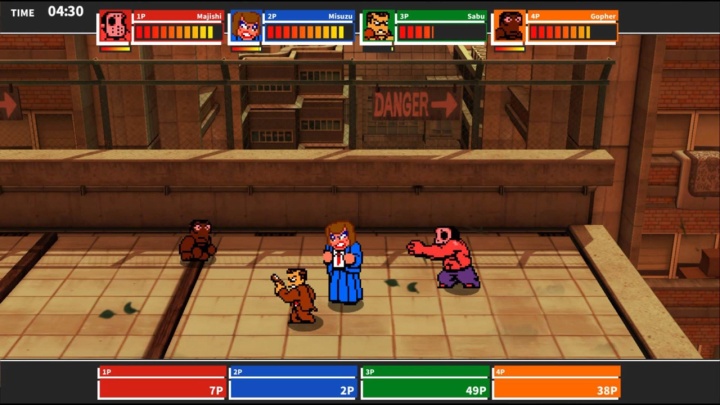 Speaking of stages, they range wildly in quality, but some of them can be pretty fun. You have your basic arenas with no gimmicks, but some of the more gimmicky stages can be real fun. From a platform that breaks apart as you jump on it, a stage filled with conveyor belts, and even some stages where you can easily throw your foes off the end, the stages are really a luck of a draw in quality when you have to deal with random selection, but when you can select them manually in multiplayer, I recommend picking the crazier stages for extra chaos.

Last but not least, are the modes, and unfortunately, this is where I felt River City Melee is the weakest. You have a few basic multiplayer modes to play with, along with a custom team editor where you can pick any characters to make your very own high school team. But in terms of single player stuff there really isn’t much. There’s battling against the CPU, a fun little endless mode where you defeat as many opponents as possible for a highest score, and a very lengthy story mode, where you can play one for every single school.

However, this story mode is quite frankly, a very, very boring and repetitive endeavor. They all just consist of a bunch of rounds fighting different teams before you fight one final one at the very end, and these rounds can get very long, usually requiring playing multiple sets at once per round! With no option that I could tell to back out of a story and resume it later, the game seems to want you to do these all in one sitting, and when you do clear one, there really isn’t anything that makes the experience worth it. Thus, I found this to be a really unappealing mode that felt like pointless filler, leading me to prefer the endless mode for single player action.

In conclusion, River City Melee Mach is a pretty fun four-player brawler, especially when played with actual people. Having a friend over, fighting with one another was a lot of fun on the gimmicky stages, though it’s a lot more boring when done on the basic arena stages. If you have four players over, then this is a chaotic game that you might enjoy for a good hour or so.

Unfortunately, the content and variety that you’d expect outside of that is just not here. The online mode is dead, (all my attempts to find matches online failed) the story mode is a tedious chore that feels more like filler, and the music and presentation is pretty lacking. Here, you have a great four-player battle mode with plenty of options, and a fun endless mode, but that’s basically it in terms of meaningful content, and for $14 I honestly can only recommend this game for a very specific niche. The basic controls may be simple enough that anyone can join in and mess around, but when there’s also not much to the game as a result then it doesn’t really bode well for being a lengthy investment of your time.