Being a Konami game from 1983, Track and Field is very colorful, with a gorgeous pixel art style and even some compressed voices to accompany it! There really isn’t much to note here besides that, but considering how only a few years prior they made games as basic looking as Frogger and Scramble, Track and Field’s sprites look far, far better.

As per usual, the Arcade Archives norms carry over here with screen and filter options.

Track & Field is an arcade scorechaser where the main goal of the game is to qualify for each of the sporting events by meeting the qualification requirement. You and up to three other players can join in on the sporting action, with some events having competitive elements, while others have you take turns.

There’s a lot of button mashing here and while I don’t really mind it myself, I know there are some who would immediately jump off a game like this due to having to mash the buttons. Unfortunately for that crowd, this game completely disables any ability to have the game rapid-fire, meaning you’ll have to do it raw unless you have a turbo controller. But even with one believe it or not, the game’s second loop can get so precise and tough that even the turbo features won’t save you from the increasing challenge, and do not get me started on any loops above that. 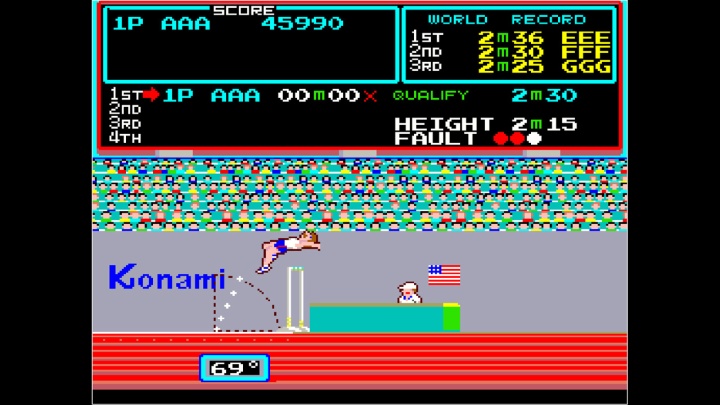 The frantic feeling of having to go beyond your limits in order to beat the stricter and stricter qualifications is honestly why I ended up really loving this game, both in the arcades and on this home version. You see, while you could just barely make a qualifying time and call it a day, getting a higher score requires you to go above and beyond, and if you can get your name onto the world records, you’ll get a lot of bonus points. Granted, most of these are extremely crazy even with a turbo cheating controller, but they’re all still doable with practice with a normal controller.

So, while button mashing is still a requirement and the game’s a pretty fair moving score-chaser for the first loop of the game, there was one annoyance that I found that I think would pretty much be a potential problem for those who buy this version: The Switch’s controllers just aren’t made for this game. Playing this in handheld mode is an absolute nightmare, since even if you map the run buttons to the shoulders and make the jump a face button, you’ll have to mash on those triggers so darn hard that they could easily break. The face buttons aren’t much better, and the only practical way you can play this in handheld mode and do well is by detaching a Joy-Con and holding it sideways, then using the face buttons by placing the controller on a table. (just like the cocktail-nature of the original cabinet)

However, if you have a Switch Lite or don’t like to use the Joy-cons on a flat surface, you’re out of luck. The Pro Controller works a lot better due to the bulkier buttons, and is the best way to play this game, especially when combining it with docked mode. So the controls aren’t really badly mapped (especially since you can freely customize them), but rather they weren’t meant for anything that wasn’t a flat row of buttons to mash on.

Luckily, if you have a Hori Hayabusa Arcade Stick like I do, or a USB controller like the Retro-Bit Saturn pad that has three horizontal buttons in a row, you can emulate the arcade layout a lot better, and it easily leads to this being the most accurate and fun port of Track & Field to date. However, this is so situational that I doubt most people would have it, nor that they should buy those controllers just to improve their scores for the online leaderboards. By far the best aspect of this game is the four-player local multiplayer, where you compete with your friends to get the highest scores, and I feel the multiplayer is the ultimate reason to get this game if you’re not a score chasing fan, but love retro sports action.

In conclusion, Track and Field is a really fun scorechaser that puts your button mashing skills to the test, with fun events that hold up all these years later, and a simple control scheme that works great. However, due to advances in modern controller design, what worked back in 1983 on a flat machine will not work as well on the sorts of controllers that you’d play this game with now. You can still have fun with this game and button mash with the normal joycons, but I do not recommend playing the game and wrecking your controllers like that. Instead, playing with a Pro Controller on a flat surface, or a sideways Joy-Con is the way to go.

Luckily, the Switch allowing for those nifty USB controllers like the Saturn Pad and Hayabusa make emulating the original Arcade button layout a lot easier, if a bit impractical for the average consumer. Thus, I can only really recommend this game for fans of the original machine, or for those who love score chasers, button mashers, or have the sort of USB controllers I’m referring to and want a game that makes good use of them. But for the $8 pricetag on offer, it’s a tough buy for anyone else.

I give Arcade Archives Track and Field a 6 out of 10.