In this horizontal shooter, you take control of an armed Submarine as you set out to take out a terrorist organization that flooded the world long ago!

Currently, In The Hunt is the most modern game released in the standard Arcade Archives series, joining Shanghai III on PS4 by being from 1993. Thus, the visuals here look very impressive, sporting a colorful artstyle that even feels a bit above the 16-bit standard of the time. It should be no surprise to hear that the artists behind this game ended up working as Nazca for SNK a few years later, to make equally impressive looking games.

The audio is pretty good as well, sporting some pretty catchy tracks and some cool sound effects. While the remastered versions in the 32-Bit home ports sound far, far better, these original versions still hold up quite a bit. Per the Arcade Archives norm, you have a variety of visual and sound options to toy around with.

In The Hunt is a horizontal shooter where the main objective is to clear each of the six stages by reaching the end boss at each of them and destroying it. If you’ve played a previous shooter in this genre, let alone one from Irem such as R-Type, then the controls and basic feel are pretty standard, with two shot buttons as you move with the left analog stick. One shot button fires upward, and the other fires straight in front of you. 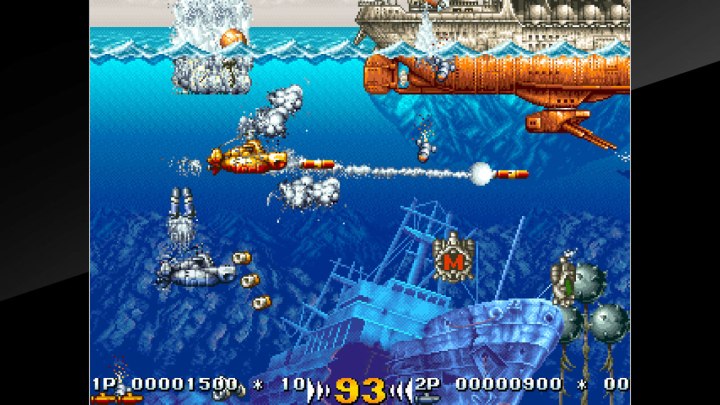 Right off the bat, you may notice that this game will not hesitate to slow down whenever you fire. Whether you’re using rapid fire or just shooting normally, the sheer amount of enemies and obstacles on screen will cause the game to suffer from pretty awful slowdown, and I honestly feels it leads to the game having a horrible first impression. 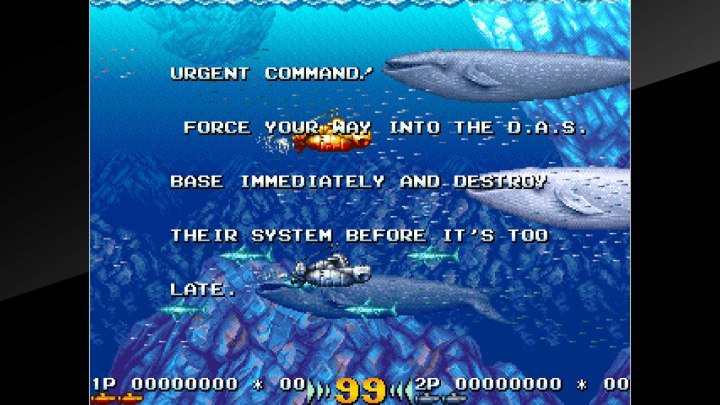 The first stage isn’t really that tough, but the stage is incredibly boring due to how the slowdown drags the stage out, along with being a visually uninteresting level. Upon reaching the end of the first stage, I honestly felt as if this was a generic shooter and didn’t feel like doing much more with it. 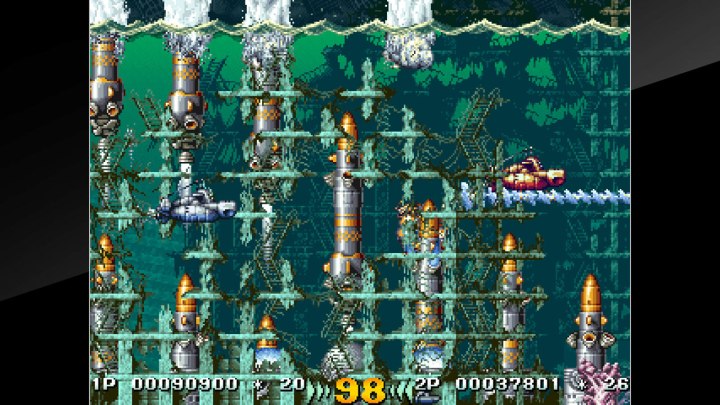 Thankfully, I gave it another shot when I invited a friend over, and while the first stage slowed down even more thanks to the extra player, we managed to play through the entire game, which ended up showing me a lot more of this game’s appeal. The later stages have some pretty cool visual effects and some of the backgrounds look an awful lot like the ones that would appear in the Metal Slug series a few years later. These stages also had a more interesting layout, even if some of the bosses were your standard quarter drainers. 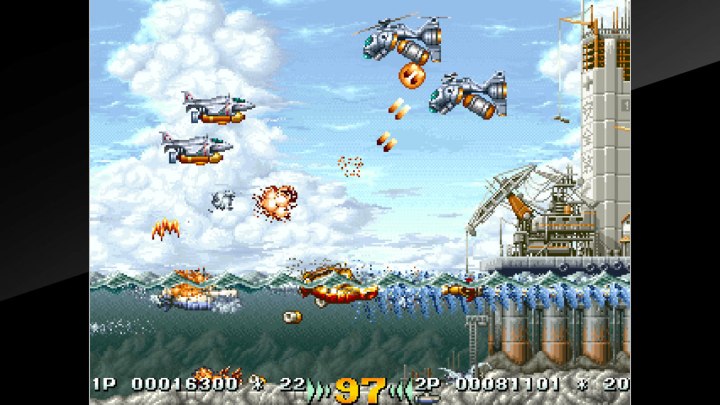 Easily the best part of the 2P mode comes from the ending. After beating the final boss, you and the other player must duel each other, and the last one standing gets to be in charge of the ending. However, if you both die, you get an alternate ending, and you also get one if you manage to beat this game solo, either with or without continuing. (As the duel doesn’t happen) The multiple endings aspect provides a very engaging reason to replay the game, and since the other stages are pretty solid in general, the only real bummer is that the first stage is just so dull. 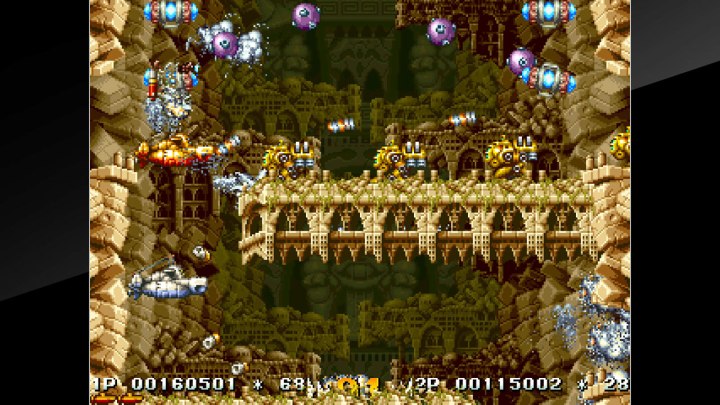 There’s even a competitive aspect in multiplayer, for the player who lands the killing blow on the boss gets a big point bonus, leading to a co-op campaign being a score competition of sorts by the end. However, this does mean that you can continue and retain your score without much of a penalty for the online leaderboards, meaning that you’ll have to rely on the standard Caravan/Hi-Score modes for your 1CC score challenges.

In conclusion, In The Hunt is a pretty OK game. Coming off as a generic and typical 16-bit shooter, the game’s art is really the most memorable aspect of it. However, the multiple endings and the competitive co-op multiplayer are still really cool things to see here, and shooter fans will find enough to enjoy throughout multiple playthroughs, even if the first stage is a drag and the entire game has crippling slowdown.

It’s not one of the best Irem shooters out there, but it’s still a pretty enjoyable romp, especially with a friend, and is worth checking out if you’re a fan of the genre. For those hoping for one of the best shooters, go for Ninja Commando or Blazing Star instead.