Thanks to SmileBoom for the review code

A few years back, I reviewed Smilebasic for the 3DS. This was the third in a series of BASIC programming games from Smileboom, and now the fourth installment has hit the Nintendo Switch. Sharing a similar name to the 3DS counterpart, Smilebasic 4 is a programming tool that tasks you with using your basic skills to make whatever you want! Or alternatively, download and play whatever you desire!

A lot of the sound effects and a few of the UI elements are recycled from Smilebasic 3, which recycled them from SmileBasic 2/Petit Computer. It’s pretty standard stuff, and the coding window is the same as it’s always been, only now with proper USB Keyboard support for faster, smoother typing.

The UI for going through your downloaded apps has been streamlined a bit, with each game now having their own custom icon rather than being stuffed into a folder like in 3. You can even save a select amount in a favorites section, for super easy access on the title screen.

The background music to the application’s menus have also gotten a nice tune up, with a very relaxing song that reminds me a lot of the recent PC Engine Mini’s menu theme. I also noticed quite a few new pre-installed BGM tracks that can be added to programs, though the option to still make your own, along with your own sprites remain.

In my older review, I noted that due to Smilebasic being an application rather than a game, it was pretty tough to review it under the same way I do as a game, since the gameplay depends on what you download. 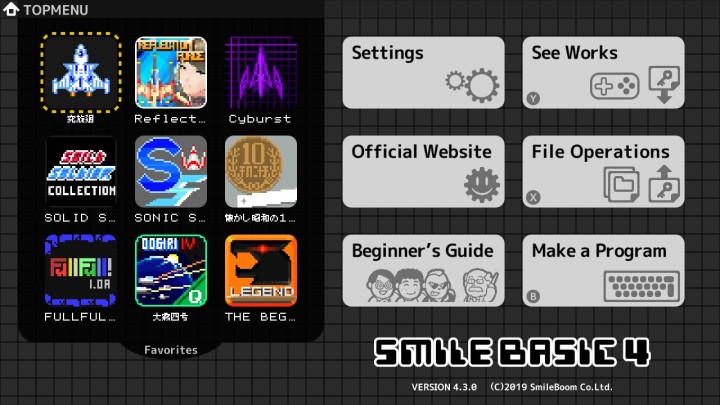 Conceptually, programming feels the same as before, with that added benefit of USB support, and sharing your creations has gotten a GIGANTIC boost. One of the things I wanted the most from the last Smilebasic application was some sort of online hub where you could download uploaded creations without having to type in their key. Now in Smilebasic 4, you finally can, and you can even sort the games by a variety of tags and conditions to find the exact type of applications you want to play. This was by far the best quality of life improvement in SB4, and I was able to enjoy far, far more games this way.

There’s even new things to mess around with, since we’re on a brand new system. You can make code that toys around with the Joycon’s IR camera, all the Labo toy-cons up to the VR headset, mess with HD rumble, gyroscope, among a few other things. Not many uploaded creations have actually used many of these gimmicks, but it’s honestly rather neat to have any application outside of the Labo games not only support Labo, but encourage creating sharable experiences for it, so if you have a Labo piano or bike lying around, you may want to dig it up for some of the shared games out there

Thus, this version of Smilebasic is a lot more practical for playing user creations than any previous installment, since you originally had to find random games on the internet in order to load impressive creations such as the Mega Man 2 DSi port, or Strawberry Strikers. Now everything that’s uploaded is on the server for download, and even the stuff from the 3DS game is available via the server keys, though they’re incompatible and won’t load unless they’re text files, unfortunately.

So when it came to finding games, I found quite a few in SB4 that I really enjoyed. There’s a set of shooters that have high score saving intact, alongside an ASCII platformer, a tribute to those old coin and hole machines, and even a working PC88 emulator! (sans ROM files, but it does still work just like the bios of the real deal) 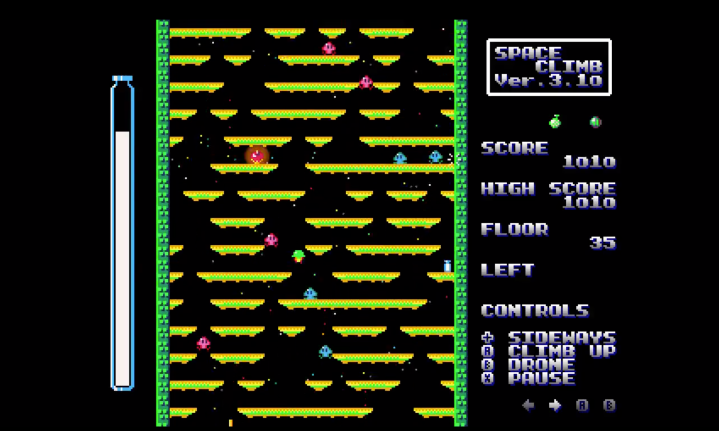 There’s just one problem when it comes to actually downloading these, as you’ll still need a server ticket in order to upload creations and download more than one application every 8 hours. The uploading part I can understand, but I do feel it’s a bit of a bummer than the ticket is still required in order to download more frequently. I personally would have set it to three free downloads per day if it were me, but at least said server ticket is only $5, so if you aren’t a patient type you can just snag one of those and go nuts downloading everything for years to come.

In conclusion, Smilebasic 4 is easily the best of the Peticom series, finally offering a simpler and easy way to play user creations from all over the world. No more having to scan dozens or hundreds of QR codes in succession, and no needing to input long passwords in order to download a specific game. (although that’s still an option if you can’t find something specific) On the other hand, there are a few rough parts to this app, from some parts of the UI or manual not being fully translated, and the $25 pricetag, which is more like $30 when you add in the one server key you’ll probably need and buy that bundle.

I still feel that Smilebasic 4 is absolutely worth the $30 pricetag for all the creative and excellent games that the peticom community have released already, thanks to an earlier launch in Japan, and I’d argue a few of the user-creations like several of the vertical shooters are of equal, if not higher quality to some actual, full-fledged indie eShop titles. It’s a pretty incredible platform, and for budding BASIC creators, USB Keyboard and mouse support makes this far more practical as a tool than the 3DS touch screen. Definitely an excellent application worth your cash, especially if you were a fan of the previous applications!