In this Arcade remix of Thunder Force III, you take control of the STYX fighter ship, as you set out to destroy a dangerous empire that has their sights set on multiple planets!

Per the usual AGES norms, you have multiple borders, filters and options available to choose from, along with the same clean menu that we’ve dealt with for every game up until now, with options for save states, replays, manual access, among other things. For this game, the US border seems to be a rather odd, generic orange background, compared to the Japanese border which just adds the title to it.

Regional differences also impact the Arcade Cabinet border, which is still pretty nifty looking here, but the Japanese one uses the generic “Aero City” machine that has been seen in a few other AGES titles, while the US border for the cabinet is a really cool, custom-made one for the AGES port. (it’s not based on the real machine, as AC never got a US arcade release) I actually really enjoyed the look of the arcade border, to the point I even played several stages with it on, something I rarely do with these types of options.

For the game itself, Thunder Force AC looks pretty identical to the Genesis version of III, only with some HUD adjustment, animation improvements, and a brand new stage replacing a few that were taken out of III. Generally, this leads to the game looking a lot sharper than the Genesis counterpart, and I honestly found myself enjoying the look of this game more than I did with Thunder Force IV.

Being a horizontal shooter, Thunder Force AC tasks the player from going to the end of the stages and taking out the bosses in the eight stages. Unlike the Genesis version of III, you can’t pick your order, with the game giving you a locked one instead. I didn’t honestly mind the removal of the stage order, since it made the game’s difficulty curve feel a lot more consistent. 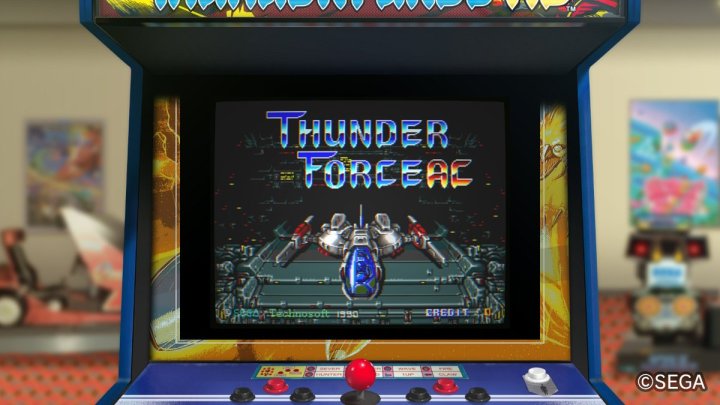 You have a traditional lineup to work with, being able to fire your weapon and switch between them on the fly, while being able to adjust your ship speed between four levels. The game does limit you to six credits total over the course of the game, so you actually can’t credit feed this one, meaning you’ll have to practice and hone your shooting skills. Generally, I didn’t find the limit unreasonable, even though the default settings will lead to caution and the need for a lot of memorization to get through each stage.

If you’re struggling or unsure, even with being able to edit live count and whatnot, then there’s a Kids Mode available which ups the credits to nine, and retains your powerups upon death. I used this for practice, and before long I eventually found myself easily 1CCing the entirety of the game on this mode, something that didn’t quite translate into the default settings, but still led me to make it way farther without dying than I normally would. The scoring is fun, the powerups are pretty handy, (such as the ever so helpful Sever and Hunter weapons) and the game moves at a fair pace, not taking too terribly long to beat while a boring moment.

All in all, that would just lead to a very enjoyable and good game, but I’m happy to say the AGES port here goes above and beyond in some aspects, by adding three unlockable ships that change the nature of the game completely. The first unlockable ship is a variant of STYX that comes from Thunder Force IV, and while it mostly acts the same, you can now manually rotate the spinning claw if you get that powerup. It doesn’t do too much different from the normal ship in my experience, but it’s a nice tweak and a cool bonus.

The additions don’t stop there, as the RYNEX ship from Thunder Force IV is also unlockable upon beating the game, complete with the differing powerups that TFIV used. That means you can blaze through the stages and tear enemies apart with the Blade and Snake weapons, and it feels like a perfect fit, one I even enjoyed moreso than the game RYNEX originates from! It does seem a bit weaker against enemies and bosses, but that can be fixed if you beat the game again as RYNEX, for it unlocks the best ship in the entire franchise, RYNEX with the Thunder Sword. This was a powerup you obtained midway through TFIV, and it was an insanely powerful attack that requires a claw upgrade to fire. 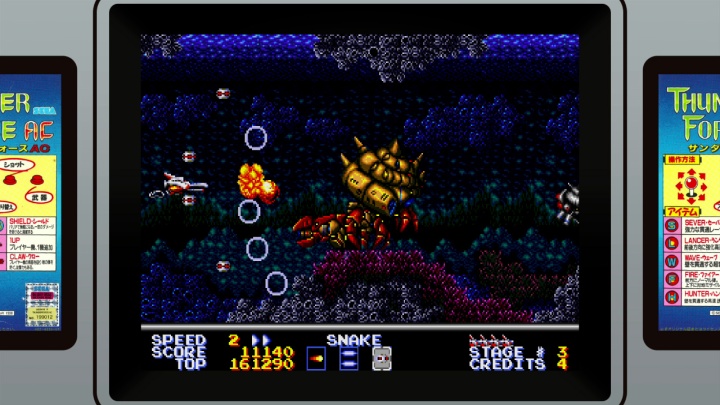 It was never available from the start in any TF game, until now. And boy, does it feel incredibly satisfying to slay anything in your path with the sword. The first boss can die in no time at all if you strike it with this thing, as with a lot of the minibosses and some troublesome waves of enemies! This makes Kids Mode pretty darn hard to even game over in, since you retain the claw upon dying. This means once you find that powerup, you’re set for the rest of the game. Of course, the normal mode offers a fair amount of resistance, but with that much firepower the Thunder Sword is definitely a satisfying unlockable, and one that shows just how much love M2 puts into these great ports.

In conclusion, Thunder Force AC is a fun shooter, with a good scoring system and an enjoyable lineup of stages that don’t overstay their welcome. But M2 went above and beyond with this one, and took what was needed to make the game even more accessible to others by using it as a smart way to train people for the game’s normal difficulty. Add the addition of cool new playable ships, online leaderboards, and the usual AGES flair, and you have a masterful port that makes a great game into one of the best releases of the Sega AGES lineup by far. Literally the only thing I could think about adding to this version would be the ship from Thunder Force II, solely because I want to play as everything in this great game.

Even if Thunder Force IV may have turned you off like it did me, due to it’s brutal difficulty and weird vertical scrolling, I’m happy to say TFAC is a much more balanced and fun game, offering a fair challenge on its default setting with bonus content that makes this game fully deserving of the $8 pricepoint. (Or even 1000 Yen, if you were like me and imported this ASAP) There’s only one AGES game remaining, and here’s hoping the other Technosoft gem gets the same amount of love and care as this title did…