Thanks to Matt Glanville for the review code

Visually, Singled Out doesn’t look all too special. The menus are similar to how they were in Ghost Grab, but besides that this game goes for a weird art style I’m not too fond of. There’s also blood explosions whenever you identify a culprit, which seems pretty strange for a game of this style, though thankfully you can turn them off if you so desire, which replaces the blood with a cage.

Still, for a game all about identifying characteristics of people, it gets the job done and none of the assets make the core game pointlessly frustrating. The music is pretty basic here, which is a big shame considering how solid Ghost Grab’s OST was, so there’s not much to note here.

Singled Out is a stage-by-stage score chaser where you must go through thirty stages in order to detain all of the escaped galactic criminals. This is done in a style that reminds me a lot of the Fruit minigame in Game and Wario, where you have to identify a wanted suspect before the time runs out. 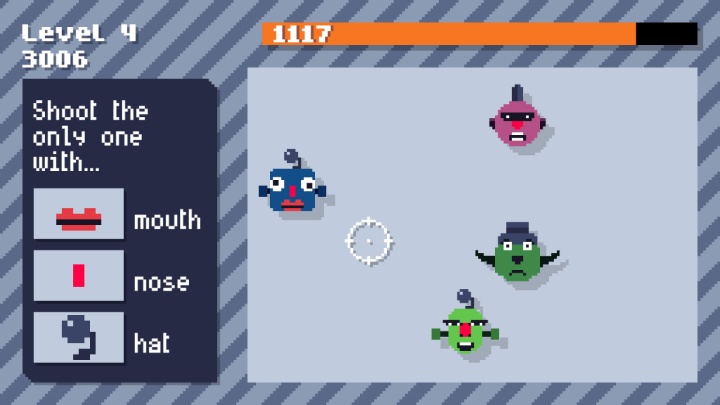 Here in Singled Out, that’s done with an on-screen cursor or via the touch screen, and if you have the opportunity, you absolutely should use the touch screen for near instant reaction time, since the faster you solve a stage, the more points you are rewarded. Each stage throws up a few faces, and you’re to tap the one that matches the description on the left side of the screen. While the game starts off simple with easy levels that make it insanely easy to pick out the culprit, Singled Out does ramp up in challenge by throwing multiple faces that are almost identical to one another, but with a minor difference that can throw you off and end your run. Add an increased amount of faces per stage to sort through, and you have a tricky albeit fun challenge on your hands. 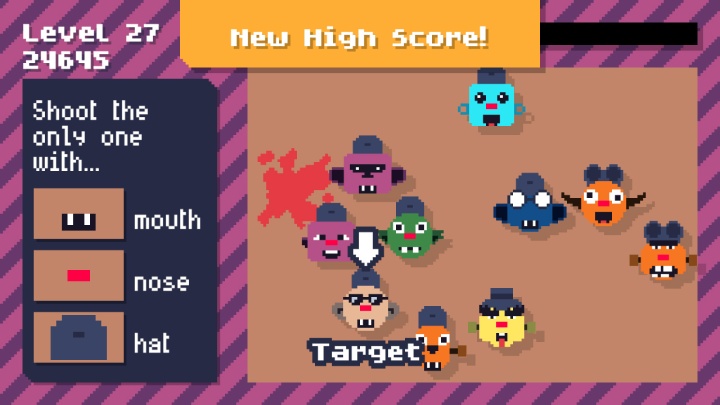 Such as with Ghost Grab, you have several in-game achievements to unlock, and these are pretty simplistic and similar to the ones from that game. However, there honestly isn’t much to Ghost Grab outside of three modes. You have a practice mode with no time limit, the normal scorechasing mode with 30 stages and a time limit, and an unlockable Memory Mode that I unfortunately, cannot describe since it requires beating the 30 stage loop and I’ve only been able to make it to the early twenties before messing up.

It’s pretty neat that there’s a bonus hard mode for those who master the normal game loop, but I do find it a bit of a bummer there isn’t much else to the game outside of tapping on faces, since while it’s a fun time to rack up points, it still doesn’t have the lasting appeal like the other two games.

In conclusion, Singled Out is a very simplistic score chaser, and while the core loop is fun and enjoyable, there’s not much else to the game besides thirty levels of identifying people and a boss. While there are in-game achievements to unlock, they’re pretty straightforward and not that interesting, and this game actually makes me wish for some sort of competitive local multiplayer mode, where you and a friend could rush to identify the culprit first for a bit more variety, since as it stands right now there’s little to do once that magic wears off.

It’s still a fun concept and if you like these sort of quick reaction scorechasers you’ll get a few sessions of fun, but otherwise, I’d just honestly advise you stick to the developer’s other two arcade throwbacks, which offer more replay value and randomness.