In this sidescrolling action RPG, you take control of a party assembled by a guild, who sets out into a labyrinth in search of treasure to help it flourish! The story here is very barebones, and really seems to just be an excuse for dungeon exploration, not unlike how Etrian Odyssey games treat the plot.

Lapis X Labyrinth is a sidescrolling action game, going with a chibi artstyle not unlike what we’ve seen from other NIS titles, with the game that this chibi look reminds me of being that of Yomawari, though of course, this game is not scary in the slightest, and the whole game has this simplistic look going for it.

On the audio side of things, Lapis is pretty average. You do have several Japanese voice options for your party members, but due to how frequently they cry out during exploration, I just went and muted the voice acting altogether, finding it more of a hinderance than anything interesting. The music is pretty average as well, though not eargrating, and the sound effects get the job done.

The main goal of Lapis X Labyrinth is to build a party of four and embark into the dungeons that await, going through multiple floors and clearing missions, all while beating up bosses and finding loot. You can create your party right at the guild, pick the classes you please, and once you assembled a team of four it’s off to the dungeons.

Lapis is a rather standard loot-hunting game, and thus the controls are what you would expect, with B being a jump, Y being your normal attack, X being your stronger attack, and A being a special attack where you throw a party member. In a pinch, you can even use the R button for a team attack that’ll deal lots of damage, but will require a cooldown period in order to use again. 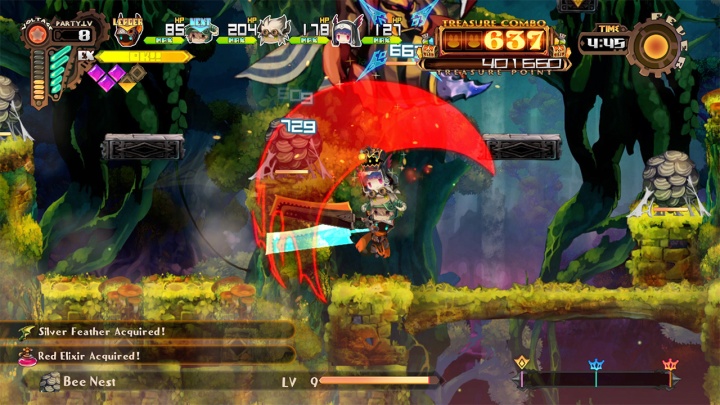 You carry your other party members on your head in a tower formation, and you can switch between them on the fly if you prefer the playstyle or weapon of a particular class, or if your current leader is running low on health. All in all, each class sport different weaponry, stats and techniques, though even with this variety, the gameplay loop in Lapis still amounts to mostly mashing Y and X while dodging foes, repeating until you reach a boss and slay it. Thus, the game can become really repetitive incredibly quickly, and it’s rather tough to get invested. 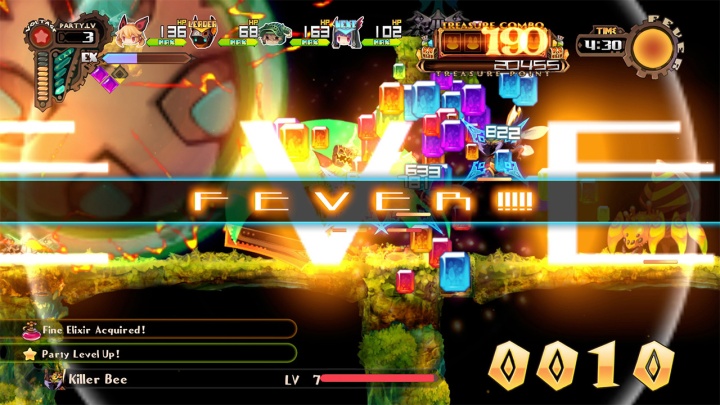 Indeed, when I first started this around launch, I played it for about 20 minutes before finding it dull and moving onto other titles in the queue. And the main reason I didn’t immediately jump back to play more for the review was solely due to how basic and dull it felt. So with me catching up on older stuff and finally giving this another spin, I was hoping that maybe Lapis would work some magic to lead to an addictive gameplay loop, but somehow that didn’t happen! Even when playing in a pick up and play fashion, Lapis is very dull. 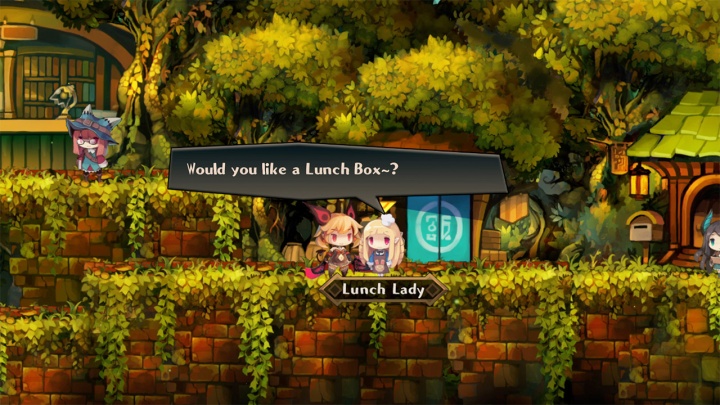 Now and then you can build up enough of a combo in order to reach a Fever mode, which increases your score, makes you temporarily invincible and showers you with gems, but even these moments don’t feel that rewarding, and your main focus is still getting to the boss and beating the crap out of it. Granted, you do have to be picky about which treasures to open at the end of a mission, but even doing that doesn’t feel like much of a worry, since you can just go back into another mission and do it all over again. Rinse and repeat, and that’s your game.

Most baffling to me is the lack of any co-op support whatsoever, as for a game like this I felt as if having a friend control one of my backup party members would have done a lot to relieve the tedium of this adventure, especially when other action platformers like this have pulled it off, but Lapis is a fully solo effort from start to finish.

Other shops do pop up and develop over the course of your journey as you clear each main “Quest Level”, but even with that, the game still feels like a basic, dull loop of taking on missions, beating a boss, then repeating until you clear all tasks for a quest level. It’s boring, it’s dull, and even upgrading your equipment doesn’t feel like much as the enemies grow alongside you as you traverse deeper and deeper. Sadly, I just couldn’t get into this one.

In conclusion, Lapis X Labyrinth is an incredibly average hack and slash with not much going for it. You enter a dungeon, beat up enemies, gain new weapons, loot and skills, and then repeat ad nauseam with little incentive to keep going or play this for long bursts at a time. On Switch, at least you do have pick up and play possibilities, but I found even when playing this game in those sessions, it just wasn’t that engaging.

The game is very repetitive and boring, there’s not much exciting about it, and not even the fever mode and scorechasing aspects did much to get me to care for what was going on. I honestly felt as if the game lacking local co-op was a big detriment, since if this had any form of multiplayer whatsoever, then the game’s fun factor would go up significantly. But as it stands now, Lapis is just a boring action game that tries to imitate parts from other dungeon crawlers, only to fall flat on its face and not really be worth your time at all. There still is lots of content here, and even in-game achievements are to be found, but that doesn’t mean any of the content is fun unless you’re the most patient person in the world.