Golf Zero goes for a rather basic look, with simple shapes and colors and really not much of note to discuss. It just maps out what it needs to and gets the job done, and really the only visual complaint I have is how the game drops frames anytime you shoot a ball, to produce the whole “slow motion” effect. I get what they were going for, but it looks and feels rather choppy and doesn’t work nearly as well as a smoother slowdown would have.

The music on the other hand is a very disappointing aspect. There aren’t many songs in the game, and for the stages, there’s only one track per batch of stages: one for the first fourty, and another for the remainder. The song you’ll be hearing for the early portion of the game is just dreadful and it loops endlessly, to the point you’ll probably be sick of it only two stages in. On the other hand, the song that plays in the final half of the game isn’t that bad, with some decent FM instrumentation going for it, and that one can loop quite a while without hurting your ears. I just wish there was more variety…

Golf Zero is a pretty typical golf physics game, though it does sport a twist that helps to make it somewhat interesting. Normally in these types of games, you shoot the ball, and then teleport to it after it settles, or you shoot multiple at once while stationary. Well in Golf Zero, you can move your character around, jump and shoot in any direction you please, while also dodging hazards and obstacles. The cool part is even if you shoot a ball in midair but your character dies, you will still clear the stage if it goes into the hole, leading to these stages encouraging a lot of creative solutions.

Thus, with only three balls to use per stage, you have to be careful and creative. Will you do a running jump and shoot high in mid-air, or will you try to do a suicide shot close to the hole? There’s several possibilities on clearing a stage, and that’s what makes some of these really darn fun. Combine some tricky platforming with that, and you have yourselves really fun puzzles to mess with. 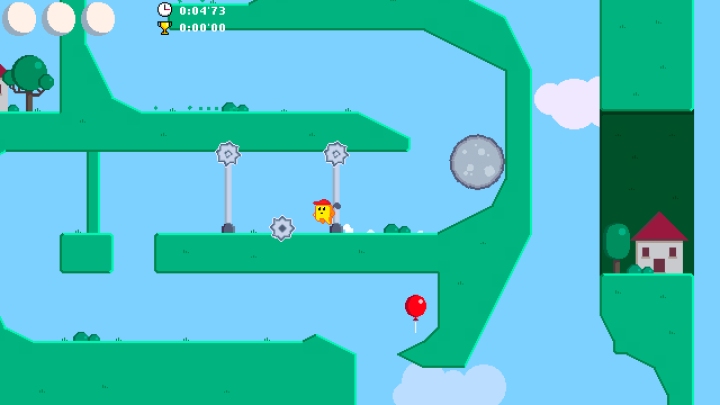 However, while this is all fair and well, I do have to lament the fact you can’t skip a stage if you get stuck on it. While I didn’t feel any of them were hair pulling or impossible, some of these levels do throw difficulty spikes out of absolute nowhere, only for the stage following it to go back down. It’s unfortunately inconsistent and more often than not the game’s idea of a “harder level” is to just litter it with more obstacles and death traps. But when the levels have all these crazy loops and springs to take advantage of for the exit, then they become really fun.

Last but not least, discussing some of the gimmicks the games throw at you. Outside the aforementioned springs, there are some other elements the game throws at you to shake levels up. Whether it requires outrunning a giant boulder, riding a minecart to use it for extra air, or racing a rival golfer, the game does work to make the game more than just golf puzzles, even if it’s only just a little. You can even get gold medals if you pop a balloon in a stage, and these are placed in really tricky locations. To make things even harder, some stages require you to pop the balloon and get in the hole using the same ball, so this does add some basic replay value.

In conclusion, Golf Zero is a pretty fun and creative physics platformer, with a good amount of challenge and fun levels to play through! But the experience overall is rather short, and outside of doing all the gold medal or speedrun challenges, the game just doesn’t evolve into a replayable experience.

It’s a short and sweet romp, but that’s about all Golf Zero is, and it makes me really bummed. Hopefully there’s a sequel in the works with more crazy gimmicks and a lot more content, along with a bit of balancing, since it can go from just an OK game to a must-have realizing the full potential of the concept.