In this RPG adventure from EXE Create, you take control of a man with no memory, awakening after a dark dragon returns to cause chaos and destruction all across the land, and now it’s up to him and three companions to find legendary weapons to seal the dragon! This story is easily one of the most barebones from any RPGs I’ve played, and that says a lot with how many NES RPGS I’ve also dabbled in over the years. Granted, this is actually a stealth remake of an ancient EXE Create fliphone game from 2011, where it was called Lost Dragon, and overall the game seems to have been remade in the newer engine of EXE titles.

True to EXE Create’s usual style, the overworld aspects of the game still use the simplistic, stiff animations and layouts that we’ve gotten used to from other RPGs, but being that this is a remake of one of their earliest games, the game feels even more simplistic than that! You don’t have an overworld to explore, rather everything is navigated via a menu, which is pretty surprising.

Next, the battles are shockingly unpleasant to look at, which I assumed was the case in the original as well… Except the original game looks way better due to the sprites being prettier and the game nailing the retro style. Here, you have these odd, filtered enemy sprites grouped into armies, and unlike the original, there’s this awful blur filter applied to the enemies, just like how they are on your overworld sprites, yet while I feel it works OK enough in the overworld, it’s horrible on these in-battle enemies, and the filter just doesn’t look pleasant at all.

The music is typical EXE Create fare, in that some of them are memorable but the tracks are reused very frequently throughout the adventure. Unfortunately, I couldn’t even find a single track that I remembered after I closed the game, which is rather sad since I can still remember at least one track from most other EXE Create titles I’ve covered.

Per the Kemco norm, this RPG adventure tasks you with guiding a team of four party members across the region, moving from objective to objective as you progress the story. As noted above, this EXE Create title definitely shows its age, and you head to each new town and dungeon by choosing from a menu, meaning that the overworld you may come to expect is nowhere to be seen, and thus the game feels even more streamlined than these tend to be! In fact, you’ll recruit your entire main party in the first thirty minutes, faster than any other Kemco RPG I can recall. 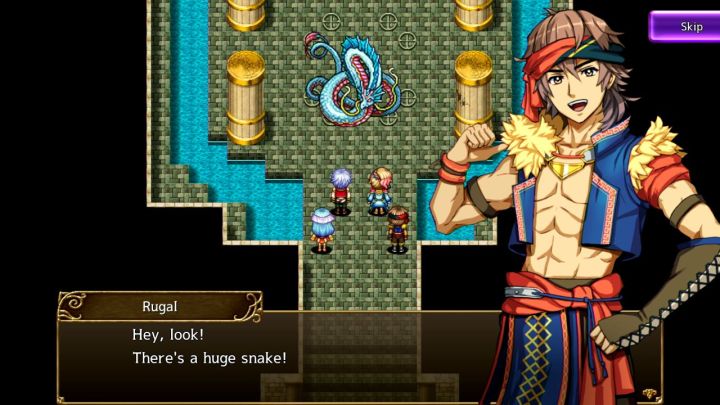 When it comes to exploration, since there’s no overworld, the dungeons are all you have to deal with, and they’re pretty typical, not really feeling that in-depth nor fun to explore. As per the norm, there are random encounters and battles, and this time around, the battles are in first-person, and outside of the ugly battle sprites, they’re your typical affair, with skills to learn and use, battle speeds to adjust, and auto battling. You also have the ability to perform a powerful unison attack once your unison meter is full, but besides that and the way you buy skills, there’s not much else to say.

And yes, your skills can be bought in this game! When defeating enemies, you’ll gain experience and gold as you usually would, but you’ll also gain elemental gems, which you can then collect and trade in exchange for teaching a party member a skill related to that element, meaning that you have pretty good options on teaching your party whatever skills you like, although this isn’t really new to a RPG.

In general, Liege Dragon feels the most like a hallway out of any Kemco RPGs I’ve played to date: the story’s very generic and basic, the characters aren’t that interesting, and the battle system, while it works fine, isn’t really anything to write home about. This is literally an RPG that’s as basic as it can get, and while most EXE create titles are simplistic affairs, they at least offer fun sidequests and some sort of enjoyable gimmick to mess with, while in Liege’s case, it really doesn’t do much.

In conclusion, Liege Dragon is a rather boring adventure, and it didn’t do that well even as a remake. The game’s mechanics feel even more simplistic when combined with the rather unpleasant presentation, and when the old version from 2011 looks way prettier and more fitting of the simplicity, that’s a pretty sad sight to see for a remade game like this, and I feel that some sort of option or tribute to the game’s original look would have been a pretty neat feature to see.

This is easily one of the weakest EXE Create titles I’ve played so far, and it’s a bummer they didn’t push harder for a remake that would surpass the original game in presentation values and scope. At the end of the day, don’t expect much else from this game besides an NES-scale RPG with almost nothing worthwhile.

I give Liege Dragon a 4 out of 10. You can check out the game’s eShop page here.