Thanks to Idea Factory International for the review code

In this sequel to the original Hakuoki, you take control of Chizuru once again, as she and her new friends continue to investigate the disappearance behind her father, along with the ongoing, fierce war that comes ever so closer to a climatic finale. As before, this is a visual novel, so thus that’s all I prefer to disclose for the sake of having the plot unspoiled.

Being a visual novel, just like the first, mostly everything I mentioned about how the first game looked and operated can apply to Edo Blossoms as well. Great character art, magnificent oriental music, Japanese voice acting, and a simple to use UI with glossary teams to learn and refer to. I can’t honestly mention much else about the presentation here, since it’s pretty much just like I remember from Kyoto Winds, just a tiny bit tweaked, and it’s all just as fine as it was before.

Akin to the first visual novel, Edo Blossoms tasks you with picking a route, (from the start this time, no mid-game picking required) which determines the main character of the story that your protagonist will stick around with. Characters from the first return, along with some new ones, including yourself if you want to go this adventure alone!

Once you pick a character you like, it’s just the same business as before, with reading that character’s story, learning glossary terms if you so choose, and choosing options that’ll determine which ending or route you’ll get. The text speed can be adjusted as much as you please, just like last time, so if you’re a fast reader then this game will be happy to provide for you! In the end, I stuck to three routes for this review, and managed to fully clear one of them, and overall this game’s enjoyment will depend on your view of the story. 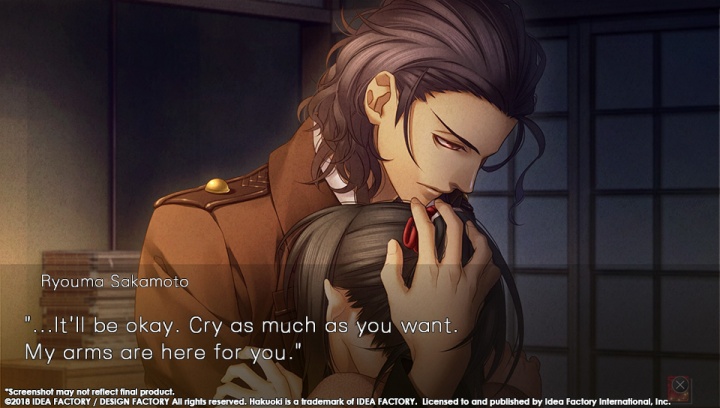 For me, I enjoyed seeing where I left off from a route I took from the first game, even though I didn’t quite manage to fully complete the original, but said route was followed up on in this game and it helped filled in enough gaps for me to keep my interest. Obviously if you can do so, please start with Kyoto Winds first, fully complete that, and then jump to this one, since it’s more of the same UI/gameplay wise with some more polish and a quicker start, and learning the glossary terms is a fun timesink, as it gets quite satisfying seeing that book of terms fill up over the course of your routes. Likewise, you have a gallery that’ll contain all the art images, routes and endings to look at, you can use this as an easy way to know how much you’re missing with a particular character.

In conclusion, Hakuoki Edo Blossoms was one of the two PS Vita long-haulers I had always planned to cover, but never got around to before shelving my PSTV. Thankfully, I’m back in the fray and was able to check this adventure out on its intended hardware, and it’s fairly enjoyable, following up on Kyoto Winds rather well.

The fact you can pick your route immediately is a huge plus, and I enjoyed learning glossary terms as much as I did years ago in Kyoto, but otherwise Edo Blossoms is a fairly typical visual novel that you’d probably be best to play after the original. The MSRP for this game has lowered on the PSN, and for the $10 price point, I absolutely think it’s worth a buy to continue the story, though if you’re a physical hunter, this one’s more rare than the original, so be wary.