Thanks to Ackk Studios for the review code

In the year 1999, you take control of a man named Alex Eggleton who must investigate a mysterious disappearance and prevent a disaster from unfolding before the new age of the 2000s!

Being a story focused RPG, this is a game where the plot matters and tries to be engaging, but unfortunately I found that at times it ends up being a bit too hard to take seriously, even when the plot does try to focus on serious plot elements.

YIIK aims to pay tribute to RPGs of old, while also paying tribute to the era of the late 90s as a whole. It does this right from the get go, by using a pretty interesting art-style that sorta mixes the low-poly look from PSOne/N64 games, but more modern menus and UI elements that you may be used to from modern PC RPGS.

That doesn’t mean the game looks like a weird combination of old and new, thankfully, since overall I found the low-poly look to be pretty charming. The game does get pretty trippy at times, with some weird enemies and absolutely insane backgrounds, but it all feels pretty fun to experience, since it’s a case of “what weirdness will we find next?”

The characters on the other hand, are more mixed. Design wise, they look pretty fine, with decent dialogue art and animation, but this game has voice acting, and a ton of it. The results of this are very mixed, and most of the time, I found the voices ranging from either “OK,” “Surprisingly good” or “really poor”.

Some characters sound better than others, and that’s not just due to better performance from other voice actors, but due to the actual sound quality. I’m not kidding when I say that some takes or characters sound as if they were done with a tin can, and it just seems really weirdly done to hear one guy with a clean voice, and another character speak with a slightly muffled voice clip.

It’s the sort of thing you’d hope would get polished up, but considering how one of the voice actors has (rightfully) been blacklisted from the industry for not-so-nice behavior, and how some of the other VAs have aged quite a bit since the original recordings, and I can see why it’s left this way, even if it is a pretty strange gripe. The music on the other hand, is pretty good all around, though a few of the songs in the game’s soundtrack are a bit too weird for my taste, even if some of them are corny in a weird, yet charming way.

Being a tribute to RPGs, not unlike many, many other such games I’ve covered, a lot of the expected beats also apply to YIIK, from a battle system with multiple skills available, overworld exploration on a world map, and sidequests and collectibles to find, YIIK has a lot to do, though most of the focus is on the main story content, and thus a game like this will make or break it depending on how it handles the pacing.

In the case of YIIK, the pacing here just isn’t good at all, unfortunately. It does have a pretty impressive start, and the opening hour shows off the game’s interesting plot and introduces some cool field items and puzzles, but afterward the game slows down to the point I was literally unable to care or focus anymore. In fact, this opening hour, while decent, wasn’t even that fast-paced at all, and only gripped me due to the mystery aspect of it all, which comes and goes after that point, mainly in favor of more battles.

Speaking of battles, these are easily the parts that slow the game’s pacing down the most. It isn’t too bad to start out, when it’s just Alex versus a single enemy, but when the enemy parties grow in size and HP, along with your party, then these battles can drag big time. Your standard attack is timing based, and varies based on the character’s profession, and while this seems fun at first, you have to do these timing events every single time you want to do a normal attack, and when they don’t do much damage to an enemy, then you gotta rinse and repeat until each and every enemy dies. 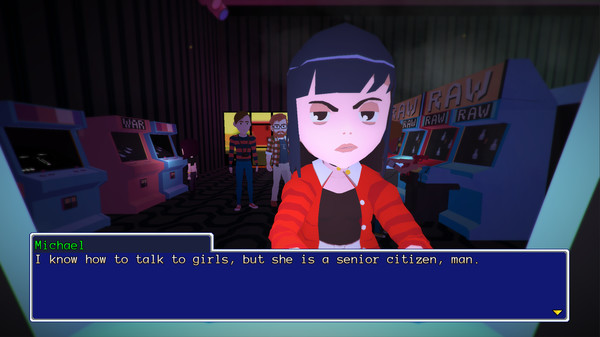 This is not fun RPG combat, this is tedious and drawn-out combat, and it really hurt to see this as I did find some of the skills to be pretty clever and funny to see, as quite a lot of them fit with the late 90s nature of this game. Once I added Michael to my party, I started to try and avoid battles entirely, since lord forbid that doing more timing events with another party member makes the fights even more drawn out. It honestly makes me hope that promised patch includes some sort of turbo mode that makes these fights insanely quick, as that would fix a bunch of pacing issues then and there. 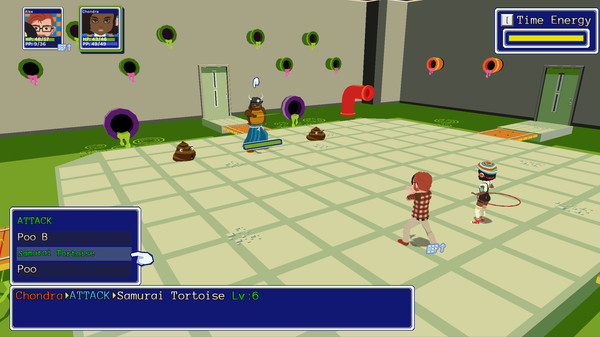 That being said, the dungeon puzzles I managed to play were rather clever, and while some of them are as simple as holding a switch down or throwing a cat to flip a level, there were some that made me think outside the box, and it was fun to find treasure. Still, this RPG was so unengaging due to the combat, that each of my multiple attempts to play through the game ended in me getting bored at some point and stopping in my tracks, and when I gave this game my “final run” a week ago, I only managed an hour of continual play before I threw in the towel of sheer boredom, meaning that I couldn’t even stomach three hours total of this game’s combat, and that definitely doesn’t bode well for if I wanted to force myself to play to completion.

While it was neat to see balance updates and other important fixes get rolled out in a timely manner, I still couldn’t find much to enjoy with YIIK over a year after I first got the review code, and thus I still had little reason to want to finish this game due to the whole game feeling like an exercise in tedium the further I got into it.

Good presentation or no, the core gameplay loop is just too dull and boring after a while to keep yourself hooked, mainly because the battles drag more and more as more party members and enemies are introduced into the equation. This is definitely a quirky RPG where you can tell the developers spent a ton of their time and love on it, but if the main game isn’t engaging to actually play, and if the plot isn’t really that gripping as it could be, then what’s the point? The developers did announce a patch to change some of these annoying aspects of the game, such as the battle system, game speed, and balance, but it’s been over nine months since that announcement, and I feel that a year and a half later, YIIK isn’t really going to be salvaged, at least enough to care about it. (LAST MINUTE NOTE: A month ago it was confirmed that this is to be two patches, and the first is to be the QOL one, but we still don’t know what this entails so my points still remain as of publishing)

I may have been quite late in getting to covering YIIK, but in the end, was this worth the wait and time for me, as an RPG fan and a fan of 90s games and visuals? Honestly, I did come out really enjoying the art style for its cool quirky looks, and some of the music is legitimately awesome, but on the other hand, you have a horrid battle system and some voices that sound as if they were recorded from a tin can. It’s a weird mess all around, and even now, I don’t recommend you check this out. Just buy the soundtrack if you have to get anything out of this game.