Thanks to Aksys Games for the review code

In this 3D puzzle-platforming adventure, you take control of Kuna, who ends up unleashing a bringer of Chaos upon his world, who ends up kidnapping his best friend Tin. Thus, it’s up to you to roll and smash throughout several worlds in order to save your bestie and restore peace!

Generally, Tin and Kuna has a pretty cute look to it, with the main character being rather adorable and expressive whenever cutscenes or idle animations come by, definitely making him someone you may grow to either love or be annoyed by, depending on how you feel about cute mascot-like characters. The worlds are colorful enough, each with their own theme, and the enemies are rather cute and funny to look at too, leaving them to be decently designed as well.

However, even a cute look and feel won’t save you from the odd visual problems that this Switch port in particular seems to have. For starters, playing in handheld mode utterly destroys the framerate and makes everything look like a blurry mess: it’s still playable enough, but the unlocked framerate and it being lower in general means everything is gonna feel very off for sure, and it hurts the good aspects of the visual presentation a bit too much. On the other hand, docked mode is only marginally better, making the game look great and run a bit better, but still at an unlocked framerate. This means you may have periods where things are running super smoothly one moment, then they dip the next if a lot of assets load in at once.

Easily the most infuriating aspect of this comes from brief pauses, where the game will completely slow to an agonizing crawl for 2-3 seconds before acting as if nothing happened. In some cases, these took place at the worst possible times and caused my untimely death, which isn’t a fun thing to deal with. As much as I may dislike when switch ports cut to 30, I would honestly prefer a locked 30 FPS in both modes solely to keep this sort of annoyance from happening, since the inconsistency just drove me up the wall.

Tin & Kuna is a 3D puzzle platformer, with the main objective of each stage being to guide Kuna to the glowing orbs and push them into the magical holes they felt out of in order to fix the environment and make them operational again. Thus, you’ll have to jump, roll, and smash to make your way through each stage and fix as many of them as the levels task you with, meaning sometimes you only need to fix one, while other times you may need two or more.

The controls are fairly decent for a 3D platformer, with your standard jump and attack button, along with the ZR button for your ground-stomp and charge attack abilities, and X and A being used when stage elements require it. Typically, a level will task you with first making your way to the elemental ball out of place, and then pushing it to the hole from which it’s separated from. This may be as simple as doing a bunch of platforming challenges to arrive at a spot where the ball and hole are literally right next to each other, from long-stretches where you have to push the ball across moving platforms to guide it home.

Whatever the case, you’ll have to be careful to avoid enemies and other obstacles, as Kuna has a standard three-hit health bar, and once it’s depleted the entire stage must start over from the beginning, puzzles and all. Yes, there are technically checkpoints around, but they only seem to really matter when you fall into a pit with extra health remaining, for any actual deaths I suffered would send me to the start of the stage without fail, and in the more spacious levels of the game, this can be outright infuriating. 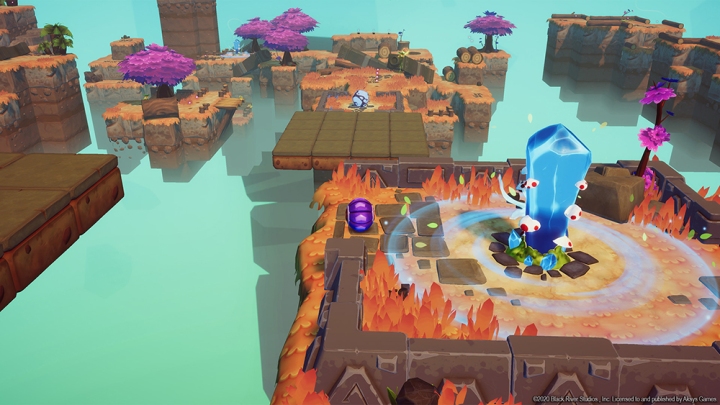 Some stages are deceptively easy to 100% in no time at all, while other levels will take several minutes of careful planning and navigation just to completely normally, which can lead to uneven difficulty spikes in worlds. Since the game likes to throw new obstacles and gimmicks at you often (from elemental crystals that can give Kuna temporary attributes, to new enemies and hazards), this means you’ll have to be on your toes quite often, which wouldn’t be so bad if the longer stages didn’t have such a harsh punishment for death. 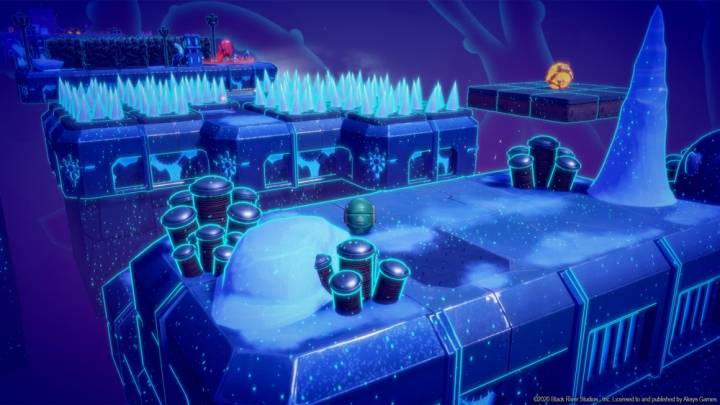 Nothing’s more aggravating than after doing a long series of ball puzzles, getting knocked into a pit by an enemy and losing all your health, meaning you’ll have to restart the entire level from scratch, plus a loading screen, and by the middle of world 2 I just about lost my mind due to how absurd the difficulty rose, nevermind this version’s performance issues that didn’t help those matters much either. 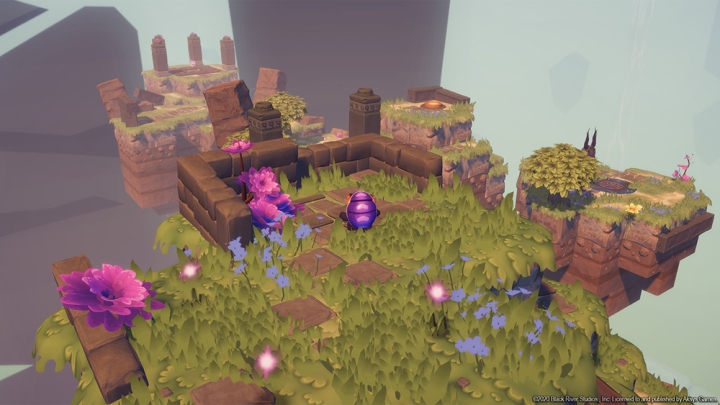 Still, there are some fun moments I had with Tin & Kuna: Going out of my way in stages would often lead to cool hidden crystals to find, which are vital in order to unlock the next world, and some of these crystals were very smartly hidden. Not to mention you don’t need to worry about getting all three of them in one sitting, since you can just repeat the stage and get your remaining ones later. (which may be for the best since, yes, death will take the ones in a current run away from you) As a matter of fact, this game does offer quite a bit of replay value if you’re up for punishing yourself even more, since each level (sans bosses) not only has the three crystals to go after, but also medals for clearing the stage with all three crystals, no damage, and under a par time, meaning that if you’re really into pain, you can try your luck at replaying stages over and over until you gradually get everything.

Unfortunately, the boring moments far outshine these fun ones, since not only is waiting for moving platforms to push a ball on dull by itself, but dealing with having to go back for these balls if they end up falling off the edge is just irritating, and thus some of these levels get outright boring too, and not just difficult! Sadly, this inconsistent level design just made me tire of Tin & Kuna very quickly, which is a shame as I really wish the game could have been a lot more engaging, balanced and fun.

In conclusion, Tin and Kuna is a puzzle platformer that looks cute and has a charming world, but is a complete mess to play. Some levels are short and sweet, while others are way too long and boring. The difficulty is all over the place too, with some levels being easy as cake to clear, while others can drive you up the wall just to clear them normally, only for the next one to not be nearly as frustrating.

By far the aspect that ruined this experience for me the most though, was the godawful performance on Switch. If you must play this game on this console, play on docked, as you’ll have at least some enjoyment out of it, even if the dips and hitches will still drive you insane, but playing this in handheld mode/on a lite is just asking for punishment and pain beyond your wildest imagination. If a lot more polish was put in this game all around, including in performance, then I could definitely see this being a fun puzzle platformer for all ages, but as it stands right now, please play this anywhere else if you’re interested, and even then, the level design may just make you break or fall asleep.