In this double pack of dungeon crawlers, you have two tales to enjoy: a brand new-to-the-west adventure in the form of Saviors of Sapphire Wings, (a remake of an older Japan only game called Students of the Round) set in the Demon Gaze world and tasking players with defeating a dark overlord, and Stranger of Sword City revisited, an updated version of that Vita DRPG I reviewed many years ago, with quality of life improvements added.

Sapphire Wings is a first person dungeon crawler, not unlike most games in Experience’s catalog. Yet somehow, right from the start of the prologue, Sapphire Wings did something to hook me right off the bat, and that was having surprisingly stellar music, and I mean, excellent music. Even better, there’s two versions of it! The original score, and a new one for this rerelease, and both are excellent, even if I stuck with the original for the sake of habit.

The art style in Sapphire Wings looks pretty great too, going for a gorgeous anime art style for the characters, though when customizing them, you can choose a slightly more realistic look for them, which I assume belonged to the original version of the game. Oddly enough, while I liked how the enemies and NPCs looked just fine, I ended up preferring the original looking art for my main squad of squires, which is why it’s good that the game gives you the option to choose. The dungeons are pretty well-designed, too, though they still look very basic with not much visual flair to them. At the very least, you do have a super handy menu that’s much, much easier to navigate than the other game in this compilation, which also helps make battles super easy to setup!

But easily, another shining aspect of the game comes from the gorgeous background art: I don’t know exactly what does it, but some of these full-screen backgrounds for certain cutscenes and locales are just stunning to look at, and even the title screen has a gorgeous art piece associated with it. Even if the dungeons themselves don’t always look that great, it is very exciting to see just how much attention goes into the cutscene art, which definitely makes Sapphire Wings an excellent looking game regardless.

As for Sword City Revisited, it looks pretty much 1:1 to how I vaguely remember my time with the original, with the same art style and a similar translation to what I recalled all those years ago on the Vita, but now it shines even better on the Switch than it did on my PSTV, so it’s still a pretty good looking game if you vibe with the art style it goes for, seeing how it goes for a more realistic approach compared to Sapphire Wings‘ anime look. The music is all intact and my opinion on that hasn’t really changed, with not much of it being memorable.

Unlike some recent NISA compilations I’ve covered lately, these two titles are not split into two pieces of individual SKUs on the eShop, so thus I’m covering both in one package the same way you’d play them at retail and via the eShop. As a result, I’ll cover them akin to a usual compilation review here, since outside of the initial game selection menu and an option on the menu to swap between the two games, there’s nothing else that really goes with a compilation, meaning that you won’t be seeing any bonus features or history stuff here.

Saviors of Sapphire Wings: This game completely shocked me. I found Demon Gaze II quite fun when I played it on PS4 a few years back, and it was easily my favorite of Experience’s titles for several reasons. But this easily replaces it for several reasons! First, the game’s pacing is just much, much better than the other Experience games I’ve dabbled with so far, as I was raring to go into a dungeon and start fighting enemies not long after completing the prologue, without having to worry about long setups or anything of the sort. 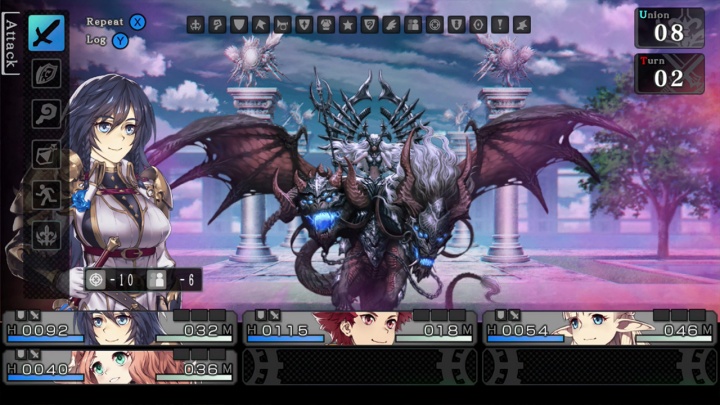 Of course, you create a custom character, recruit party members, and go out in dungeons in search of quests to solve, but not long during the game you get handed your very own ship, which opens up a bunch of fun new stuff for your team of squires. You can use the materials dropped by enemies for alchemy, where you can experiment with items to see what they become, or deposit unwanted equipment of certain types to level up every weapon of that type, for instance, offering a good use for all the enemies you defeat, and creates a satisfying loop of gathering items and returning to test them out in alchemy! 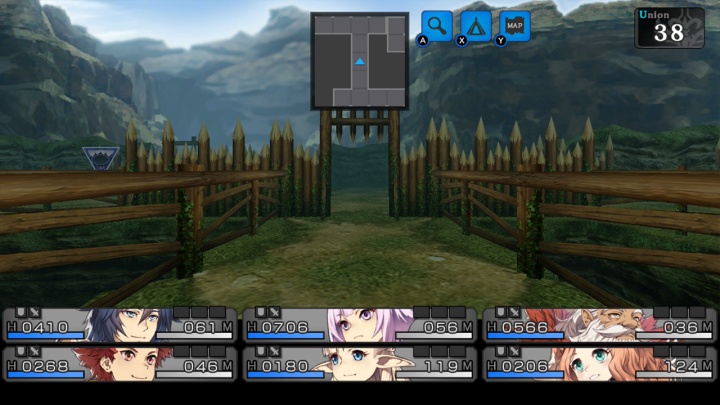 You can also talk with your party members, who are indeed, pre-set NPCs with their own plotlines, yet customizable enough that you can change their look and some aspects of them, including their names, which helps the bonding aspects you can further in your own room, offering benefits for their soul gauges that can in turn, help them in battles!

But of course, the dungeon crawling is the main draw of this game, and it’s excellent. Movement controls is like you’d expect from a dungeon crawler, but it’s super fast, and mapping out each and every corner of the rooms is still a satisfying task to go after. The combat is super fun too, being a more refined form of the combat in other Experience DRPGS, and also maintaining the super handy fast action mechanic that makes turns fly by in mere seconds. 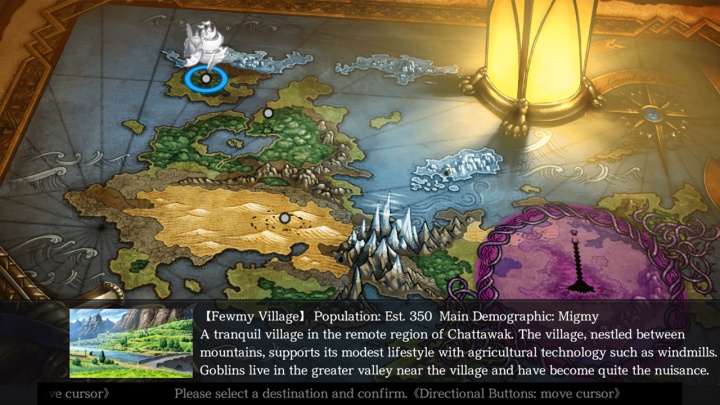 This means if you’re strong enough to only need to do normal attacks on a group of enemies, you can just press X and fly by battles in no time, making random encounters with weak enemies a complete non-issue! For the more difficult encounters, you can manually plan and strategize as needed, yet still be able to use the fast action to make the completed turn fly by, which can even make tougher fights a lot faster than your typical RPG. This, alongside being able to save ANYWHERE out of battle makes this an excellent pick up and play RPG, which really helps the portability aspect in handheld mode.

Once I got used to the game, it took no time at all for me to have a blast and take up quests to complete, making this my absolute favorite RPG from Experience, and one I definitely want to fully complete after the review period. From excellent music, great combat and exploration, and an amazing gameplay loop, this is easily the best of the package!

Stranger of Sword City Revisited: Now this is an interesting one. The original game launched on Vita several years back and I reviewed that one for the website then, and this is where I’d normally say my opinions haven’t changed much since the original game… Except they kinda have, for this is the Revisited version of the game, an enhanced QOL version that was made available for sale separately by Experience themselves a while after the NISA release on Vita. 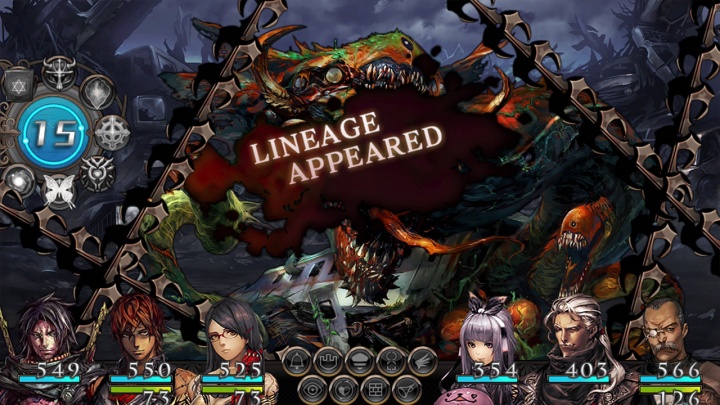 So now that it’s finally in physical form for the first time ever as part of this double pack, (where it’s considered the “Bonus title” here) I can cover my thoughts on what Revisited added to the mix compared to the original, which I did criticize for difficulty spikes and unevenness in general. Thankfully that huge issue is immediately remedied right off the bat, for there are multiple difficulty options this time around and the game in general felt a lot more balanced, with the first major area of the game giving me nowhere near the amount of hell it gave me on the original Vita release, since I was used to the battle system and the game itself was a lot friendlier and much, much better on letting you get your feet wet as you prepared for the proper challenges later in the adventure.

But besides just being better balanced and newcomer friendly, there were other minor things I noticed too: new items being the biggest one, and there have also been a few new classes added to the mix, too. For later-game stuff, there’s also the addition of some more bonus dungeons, for those willing to go all out with this game, so it’ll keep you plenty busy, even if I still didn’t care for Sword City too much. 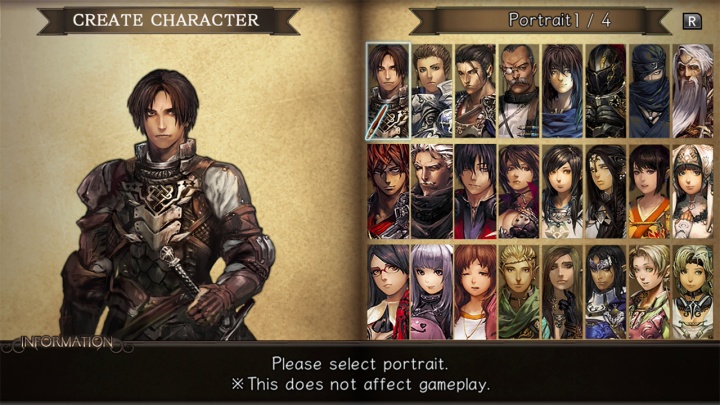 So while I still don’t find Sword City nearly as fun as several other DRPGS I enjoyed, I was happy to say the second time around was much better than the first due to the improvements in Revisited, so as a bonus game it’s pretty decent and actually worth giving a shot now, while also making the original totally redundant and not at all worth playing unless you want a harder experience. That being said, considering how excellent Sapphire Wings is, it can feel like a huge downgrade even in that sense, so it may be a good idea to play this one first if you want to see how ideas from Sword City would later be used in more refined and fun ways in Sapphire Wings, since both DRPGS are worth your time, with Sapphire Wings being the must-play of the collection.

In conclusion, this is a pretty odd double pack, since one game is singlehandedly worth the full $40 price it’s going for, and that’s the outstanding Sapphire Wings. Sword City on the other hand, while a fine enough, refined DRPG, feels like a much weaker, watered down showcase of the elements that would be refined in Sapphire Wings, and just feels like a random game they threw in as a bonus feature.

Still, do not be fooled, for both games have a ton of content to enjoy, including full in-game achievements for both titles, challenging you to do your best with the superbosses and extra quests awaiting you after the main stories! Honestly, it’s hard to find much wrong with this package due to Sapphire Wings alone: It really caught me off guard with an amazing presentation, and is arguably the best first person dungeon RPG on the entire platform in my humble opinion.

So honestly if you haven’t played it before and are a fan of DRPGs in general (even ones like Etrian Odyssey), you do owe it to yourself to give Sapphire Wings a shot ASAP. As for Sword City? Consider that an interesting curio, but not much more than that. Still, for $40, this is an absolute steal of a DRPG double pack, and the price is worth it for Sapphire Wings alone.

I give Saviors of Sapphire Wings & Stranger of Sword City Revisited a 9 out of 10.