Thanks to IDEA FACTORY INTERNATIONAL for the review code

In a world where battleships are humanoid, you take control of several ships, each going on their own quest to figure out just what the heck is going on regarding some mysterious sirens… There’s quite a lot of dialogue here and a plot, but don’t expect it to make much sense for a while, especially if you haven’t played Azur Lane before.

Being a PS4 game ported to PC, and then to Switch, like Arc of Alchemist, I was honestly a bit fearful that this game would end up as a technical disaster like that one, but I’m a bit surprised to learn that this Switch port really doesn’t perform nearly as bad as that game did. Right off the bat you will indeed notice reduced visual quality and some blurriness, but it does run around 30FPS a good amount of the time in both modes and controls decently enough that I was surprisingly not too bothered by the framerate drops, so on that front, the Switch version does feel a lot better for handheld play, and surprisingly tolerable in docked mode too.

The voice acting is all in Japanese, continuing a very noticeable trend I’ve seen from IFI games where the English dubs are going away, and as per usual, the VA gets the job done, though it isn’t really memorable nor was there anyone I could notice that reminded me of a character from another property.

Regardless of how you choose to play, Crosswave is a third person action shooter, with the main objective being to clear each chapter of sea battles while progressing the plot. This is done by going around each chapter’s map and interacting with different characters and events, learning more about them while also advancing the plot and engaging in naval combat, which takes place in real time third person battles.

These battles are rather simple, since you pick from a group of three (humanoid) ships along with some assist characters, and then control them with the left stick. Each character has their own set of skills to use, whether they range from repeating weak attacks, stronger attacks with a cooldown, or an ability of some kind, and maneuvering around the sea to target the enemy ships accordingly is usually how these battles go. You can switch between your three chosen members on the fly, and it comes in handy when you’re dealing with characters with cooldown, or want to go all out on enemies.

Unfortunately, the combat is not too engaging at all, and in the first two chapters I found myself winning battles in under a minute; the one time it wasn’t that fast was due to me choosing to play a side chapter with tougher enemies earlier than I was supposed to, which really just made them all feel like sponges rather than them being smarter in combat. The few times I found any sort of fun while battling were during the boss fights where instead of fighting battleships or boats, you actually fought another humanoid character, since their movesets were more diverse to deal with, yet when I still manage to take them out in minutes, that fun quickly dried up, and the repetitiveness of doing this constantly just made me feel like I was going bald. This is a big shame, since the switch port here runs these battles rather nicely, and if they just had more to do then I’d be able to sing the praises of them a bit better. There is a battle-centric mode you can go for known as Extreme Battle that actually makes them more strategic, but the fact these aren’t the main story missions just makes me wonder why they bothered to make the story such a slow, boring burn to begin with.

Speaking of story, that’s another aspect of this game, since being a Compile Heart title, there’s a lot of character interaction and dialogue scenes you engage with on the map inbetween each battle, and while their games are known for at least having a lot of funny or endearing moments, if juvenile or outright stupid at times, sadly, Azur Lane’s story moments just did not make me care in the slightest, and the fact a bunch of the map events were dedicated to character interactions that never seemed to go anywhere, or led to anything interesting happening just bored me to tears, to the point I skipped some outright, and literally missed next to nothing from doing so. 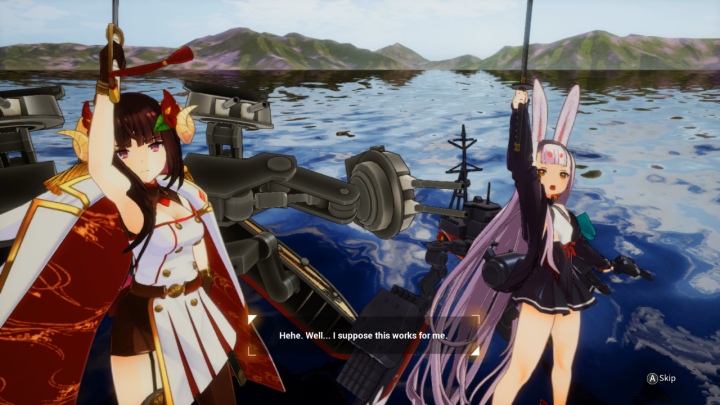 To be fair, the end of certain chapters do start to pick up the pace in this aspect, and some of the side chapters have shorter stories that I found a bit easier to care about compared to the main narrative, but otherwise it was just a bunch of wordy talk with me hardly able to care about it, and after Chapter 2 along with some side chapter dabbling, I couldn’t take much more of this. I really tried to push onward, but eventually I just broke of sheer boredom. Not a good sign when your combat is so easy and simple to get used to.

In conclusion, Crosswave is a very medicore third person shooter game, ported in an average fashion here on switch. It’s not a terrible way to play the game and is really good for portable sessions, but otherwise it becomes a long drawn out ordeal with repetitive missions and boring story elements that never really get too engaging, and the core gameplay loop just never, ever lands. It seems this is based off a mobile game of sorts, and thus I assume people familiar with that franchise may get more of a kick out of this due to knowing the characters more.

Regardless, the gameplay is just too dull and boring for me to keep my interest, and when the other half of the game (the story sequences) are so agonizing that I found myself skipping through some and literally missing nothing when going back to check if I missed anyway, that’s not a good sign of a fun game at all, regardless of platform.