Thanks ININ GAMES to for the review code

Taking place after the adventures of the original Cotton game, this Mega Drive Import has Cotton going out once again to stop the evil that has ruined her candy and is taking over the world! Just like the port of 100%, everything story related is still in Japanese.

The usual Ratalaika Games port structure applies, and being based off what they used for 100%, it’s 1:1 the same: a modernized mode with save states/rewind, and a classic challenge mode with nothing but button remapping available. Likewise, you get all the handy display and filter options from their many other ports, though unfortunately, they also have the same bugs as in 100%: the screen options don’t actually work.

As for the game itself? Panorama Cotton is pretty infamous for being a nightmare to get running on early emulators, mainly due to the fact that this game pulls all sorts of visual insanity out at you: the game takes place from a behind perspective not unlike Space Harrier, but unlike the Genesis’ own Space Harrier II, this game runs a lot smoother and offers a rather pleasing art style, with different layers of scaling and cool backgrounds as you fly through each stage. Unfortunately, this emulator also falls victim to the nightmarish scaling, since while the first stage may give you a decent first impression, the second stage is when a lot of elements are flat out missing or glitchy, to the point it impacts gameplay in a very, very bad way. More on that in a bit.

The music is also pretty incredible, although a few tracks are remixed and based off the original Arcade game’s OST, so that shouldn’t be much of a surprise. Still, the game has a good amount of original stuff to listen to as well, such as several stage themes, the ranking theme, and many others. There’s even compressed voices here, which might actually be the most funny part of this game due to how meme worthy one of them became for a while in the 2010s. (The intro to a stage has Cotton shout her usual catchphrase, which when garbled on the genesis, sounds an awful lot like her randomly saying “PIZZA BONG“.)

Panorama Cotton is a rail shooting game in the style of Space Harrier, with the main objective being to fly to the end of each stage, shooting down all the enemies in sight while avoiding obstacles and hazards. It’s pretty typical stuff, with you being able to control the speed of your flight and use magic by collecting dropped crystals from enemies, just like in the other Cotton games. Likewise, holding down the shot button will cause Cotton to throw Silk towards enemies, and can be used to pull off differing magic than pressing the button normally. 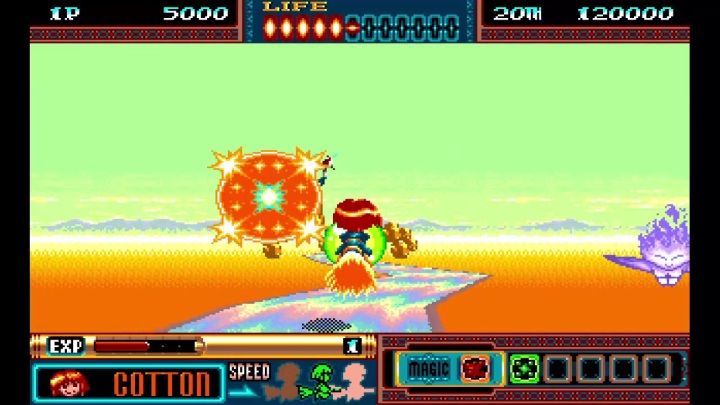 The really neat part about this game is just how much it pushes the hardware. Indeed, as noted earlier, the scaling effects lead to a lot of chaos on screen, and thus, the typical slowdown and framerate weirdness of early retro games, but somehow, it manages to hold itself together far better than Space Harrier II could ever dream of, leading to an honestly fun game with a good gameplay loop and great scoring: clearing a stage fast enough will get you more bonus points, and as per usual, the end of the stage results in a bonus session where you have to gain tea for points (or skip them all for a big bonus!) 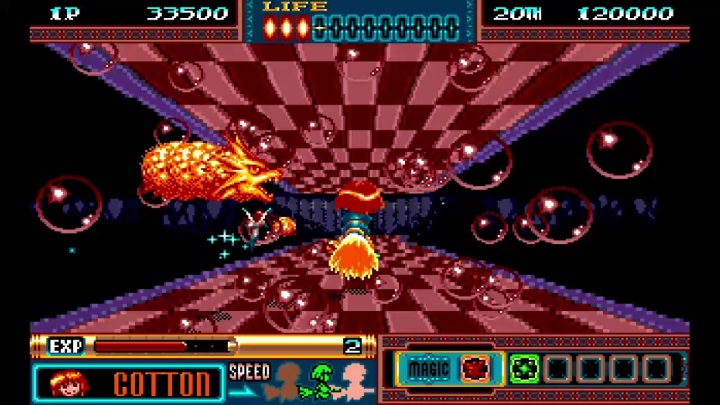 To make things even better, Panorama has a local in-game high score leaderboard, and even a dedicated Score Attack mode in the options menu, focused on fast clear times and gaining tons of point bonuses, which should lead to this being a scorechaser dream, and indeed, it is, with my attempts at Score Attack being incredible amounts of fun, feeling joyful with the 8bitdo M30 pad. All seemed well and good, until I actually tried to focus on playing the game to completion, and that was when a terrifying reality set in.

You see, I mentioned earlier how Panorama Cotton was notorious to emulate on Genesis emulators for eons… And how those that managed to run would have some occasional bugs. Well, here in this commercial reissue, you have missing assets! Some of them are minor, like rock formations in the first level, but then in stage 2 everything falls to pieces. You see, obstacles and enemies are missing, either until right before they hit you, or entirely. Yet, their collision is still intact, and thus, they still move around and can hurt you, but they’re totally invisible.

Now think about trying to 1CC or play this game for score, or to completion without using rewinds or save states, (mandatory for unlocking bonus content here!) and you’ll see a huge problem: The game is absolutely abhorrently emulated. Invisible enemies were the same kind of nonsense that makes Zero Gunner 2 Minus a laughing stock, and even that got patched to at least fix it: a patch is to come with EN text soon, but the fact the base game isn’t fully completable without bugs of such magnitude makes me wonder how the heck anyone involved in reissuing this failed to catch such an error! It honest to god is inexcusable for such a price.

In conclusion, Panorama Cotton has so much about it I want to love: awesome music, a great Space Harrier-styled game that plays better than the actual Genesis Space Harrier, intense visuals that really push the mega drive, and an addicting score attack mode that should lead to this being a game I could jump back into to challenge myself again and again on.

However, when the game outright has invisible enemies and obstacles due to horrific emulation, this port becomes an absolute major disappointment, and a baffling one at that. Even Cotton 100%, buggy filters and all, still played perfectly fine, but this game, notorious for emulation problems across the board, wasn’t looked over enough to notice that freaking stage 2 has *invisible enemies*?!?

With how these devs did such a great job with Gleylancer, I can only conclude that this porting disaster had to have stemmed from being rushed out somehow: whether to try and time it with the physical releases, or just for the heck of it, it is incredibly disappointing that such a promising game, so close to being accessible in a cheap and affordable fashion, was thrown out in such a state of disarray. Like with Cotton 100%, a patch for EN translation is on the way, but I also hope they fix the damn game first: something that should have been checked more carefully from the get go. Still, since this version is being sold as is for $15 for a week now with no current notice on these issues, I’m reviewing what I was given, and not based on the future. Hopefully in the future, it’s as great as the Gleylancer port was… But for now, I cannot recommend it at all.