Thanks to Qubyte Games for the review code

This review is rebooted, and is being written a bit differently: in my Humans review, I noted that I wrote some aspects of it in past tense due to a review of this compilation being in the works on my old macbook before it went and died. With data loss looking increasingly unlikely, it seems very well like I’ll have to restart anything and everything in progress, including some reviews that were near finished like this one. So, since this review is pretty easy to rewrite compared to my other lengthy ones, I’m rewriting this now. Yet due to Humans being written as if this one was already done, I’ll be writing some aspects here like they’re new being that this is the first entry in the Qubyte Classics line.

Without further ado, onto the review!

In this first installment of a new retro reissue lineup from Qubyte, the computer action game The Immortal is back in the spotlight, with this compilation including both console versions: the ambitious NES port, and the pretty basic Genesis conversion. Both task you with venturing to the bottom of a mysterious stronghold in search of your master, all while avoiding traps, dueling monsters, and collecting items along the way.

Being a retro compilation that provides a backend for future products to launch as part of this emulation series, (and with PIKO’s catalog, that means literally dozens of games in varying quality are possibilities for future entries) The Immortal starts us off with both a Genesis and NES emulation, both sporting a pretty typical array of options.

You have a control configuration setup, which oddly configures for both versions at once, leading to a bit of irritation if you try to map the Genesis layout and then attempt to play the NES port with a screwed up mapping, so I wish for future compilations to allow each version to use their own mappings. Alongside this, you have a few filter and screen options, with the smallest one forcing a pretty lame border on you, so I decided to just stick to the 4:3 screen option for this one. Lastly, you have a pretty typical save/load state menu, that can be brought up with the shoulder buttons, and while they do work, the UI is a bit clunky to navigate, and I feel it could be a lot snappier.

So, how about the game itself? Well, the original version of Immortal was released for old computers, and that version isn’t included here, just the console variants. Of the two, the Genesis one is the closest looking to the Computer version, with a pretty drab art style and more gruesome animations across the board: lots of blood and intense ways to end up dying here, and not even the enemies are spared, as encountering one will take you to a pretty nifty battle scene, portrayed in an isometric perspective, but otherwise the game looks like a rather generic fantasy game, with dull music that sometimes doesn’t even play in specific areas. Nevertheless, if you want to get closer to the computer presentation, the Genesis port is the advisable one.

As for the NES port, this one is vastly more ambitious, and one that I honestly ended up preferring in the end. Yeah, the colors are even darker than the Genesis port, and it goes to 8-bit over the 16-bit look of the original, but I was impressed by how many aspects I recognized from the Genesis game being remixed or carried over pretty well. The gruesomeness of the OG versions is of course gone due to Nintendo’s policies of the era, but there’s still tons of cruel traps to avoid, and the battle scene is even intact! As a matter of fact, a song that was meant for dialogue scenes is repurposed here as the main battle theme, and the NES arrangement is really, really excellent, pretty surprising considering the rest of the game just has spooky background music that isn’t anything memorable. The menu is a lot clunkier as a result of moving to NES, of course, but otherwise this 8-Bit port is well presented for the hardware, and i ultimately preferred this one in the end.

Whichever version of The Immortal you choose, the main goal is the same: venture deep into the labyrinth and save your teacher, all while avoiding the many, many, many attempts the game tries to kill you with. Generally, the gameplay is pretty similar across both versions, but the two ports included here are balanced just differently enough that they have their own benefits and disadvantages. 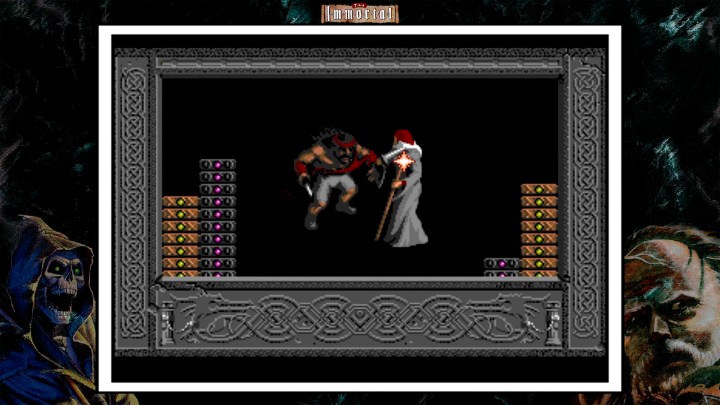 One thing that I sorely missed while playing these games was the lack of some sort of rewind feature in the emulator, since you’ll be dying a lot in these games, and with limited lives, save states are pretty much going to be essential unless you want the old school experience with the password system. While I had little issue opening the menu and using the save states, it did get pretty irritating having to constantly reload and save, especially with the menu being as unusually slow as it is. Like I noted earlier, I feel that the menu UI could be much snappier, and with this irritation factored in, don’t be surprised if you end up spending a considerable time in menus just trying to redo a battle or avoid a fatal mistake in a room, and with a rewind/quick load feature it would have mitigated this gripe by a lot. Anyhow, as for the two ports included… 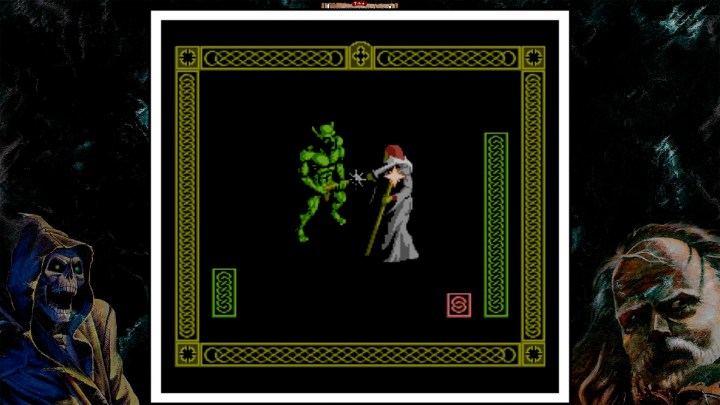 The Immortal (1990, NES)- Wait, the 8-bit version came first…? Yeah, that surprised me too! But indeed, our first port came to NES, and it reduces a lot of the darker elements as I noted above. The inventory system here is pretty standard and easy to flip through, and despite how stiff the scrolling can get, I actually found the playability of this one to be pretty fun and more easygoing, at least, as easygoing as a cryptic game like this can be.

The Immortal is definitely one of those guide games at the end of the day: see, not only do traps involve random things you run into deciding to kill you, but also the various items scattered around the labyrinth: some you pick up and they kill you, some you use and they kill you, and some will kill you if you have or do not have it during specific scenes: Definitely trial and error incarnate here, and on NES, that’s still an annoyance, but the inventory system plus the compilation’s save state feature at least helps to make this a game you can get some decent enjoyment out of, even if you may have to resort to a guide when you inevitably hit that progress wall due to a cryptic puzzle or an enemy that just will not budge out of your way.

The Immortal (1991, Genesis)- And here’s the one that looks a lot like some computer versions, gore and all! While the core concept is the same, the level layout is pretty different from the NES version, with a lot more complications thrown in, I assume from the computer versions. Yes, what was already a cryptic game on NES is even more obnoxious here, with mazes galore, harder battles, and an inventory system that I found more irritating to deal with than on NES, mainly due to the fact that QuByte’s wrapper maps the button layouts for both versions at once: thus, what may be the shoot and menu buttons on one system don’t match with the layout they’d be on the other console, so if you wanted to aim to make the controls match the original console layout in some way, you’re in for a frustrating time making this version in particular just right. 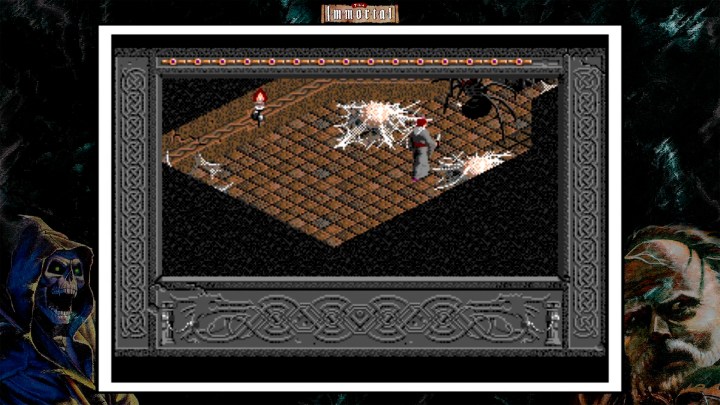 Nevertheless, this is still a better looking version of the game, even if I find the controls here to be way sloppier than on NES, especially in battles. I also found this version to be the one that absolutely wanted me dead more than the NES one did, with this port being the main reason I craved a sweet rewind feature. Regardless, if you grew up with this game on a computer, this port is likely the one you’ll gravitate towards, even if it plays a little worse in my book.

In conclusion, The Immortal was a weird choice to start this line of retro classics with: neither version of the game is particularly a classic by any means, and while I do find the NES version to be a legitimate gem worth trying out at least until you get stuck, the basic wrapper, the frustrating guide game nature of both versions, (but especially the Genesis one) and the lack of QOL stuff like a rewind feature does lead to this tedious experience not being brought back in the most polished of ways.

Honestly, I feel the package as a whole would have been significantly improved if it just included more bonus content: original manuals, key art, advertisements, quality of life tweaks, and such would have gone a long way in helping this reissue feel more meaningful than the other rereleases The Immortal already has: Indeed, you can play the NES version on Switch online, the Genesis Version on Antstream and Evercade, and even the computer versions on Antstream and other Computer platforms, so this compilation doesn’t do too much to make it worth picking up over the other recent reissues available, nor does it include any obscure versions or archival material to give this pack a boost.

For $7.99, there are far better games in Piko’s catalog (Tinhead or Drahkken, anyone?) that I argue deserve the Classics treatment, and would have made for a better package than The Immortal. Adventurers, be wary!

I give Qubyte Classics: The Immortal a 5 out of 10.

One thought on “Qubyte Classics: The Immortal by PIKO (Xbox Series X)- Review”