Thanks to Ancient for the review code

In this sequel to the late 3DS eShop hit I reviewed many years ago, you take control of the Gotta Protectors once again, as they set out to defend their princess and stop a new wave of evil, this time, one that aims to corrupt and destroy their world! While it does reference the past games in a humorous fashion, this sequel doesn’t really care whether or not you played the prior games in particular, and seems to one again aim to be a standalone thing that doesn’t take itself seriously at all.

I had to refresh myself with the previous game briefly before going into this one, since to me it didn’t seem like too much had changed on this front: In fact, I originally assumed this was just an expanded port of the 3DS game when it first hit Japan many years ago, but it’s indeed a full blown sequel, despite maintaining a very similar throwback feel to the NES, just like the first game did.

The visuals and sprites are pretty familiar across the board, and continue to maintain their NES roots, while the music manages to be just as outstanding as ever, with a bunch of new compositions from Yuzo Koshiro that really got stuck in my head over the course of my adventure. Even better, the DLC for this game allows for the entire OST to be presented in a variety of formats, fully redone in the style of such things like the PC88, Super Nintendo, and Wonderswan, and it sounds even better with those instruments, with the PC88 being my personal favorite of the bunch! Honestly, the biggest reason to buy the DLC if you ask me, since that’s pretty much all I used it for during my review.

There are also a bunch of compressed voice clips, just like before, but now you have the option to play with these voice clips completely uncompressed, which just comes off as jarring to me after getting used to how the last game sounded, so I just kept it compressed. Even more strange, there’s an english dub for these clips now! Unfortunately, it isn’t all that great, with the compression on these voices not being nearly as strong as the Japanese voices, which makes the bitcrush not nearly as effective. I feel if the compression was just as hard as the JP voices here, then I could recommend both with confidence, but as it stands right now, I’d only go for the EN voices if you don’t mind playing with the uncompressed audio.

Cart of Darkness continues the traditions set from the last game, by providing a funny adventure with the main focus being to defend Princess Lola from monsters, all as you aim to defeat waves of enemies and clear through each of the stages, consisting of four levels each. Just like last time, you have several different classes to choose from, each with their own skillset, and there’s a few new classes here as well, such as the Oracle, who ended up being a mainstay on my team. 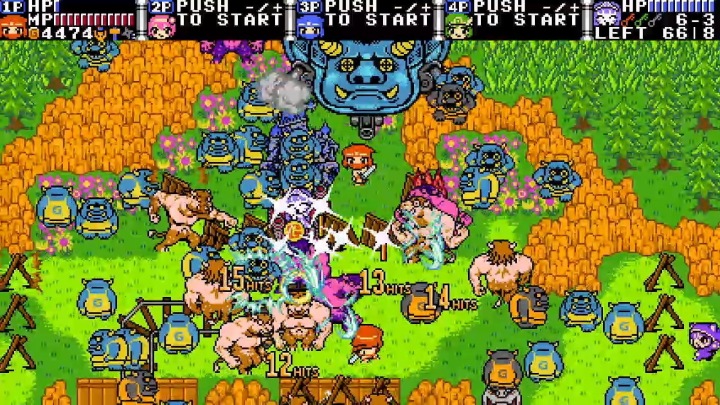 The big difference with gameplay in COD however, comes from how the princess’s castle automatically moves, and is on a guided railway towards the enemy castle. As you monitor and guard Lola to make sure she can ram it into the enemy base, you’ll be dealing with waves of enemies and their spawners to take out, which is where all the Warriors-style action comes into play. Each class has their own fun skillsets to mess with, and as you gain more gold to upgrade your castle, you can even buy other skillsets and combine them to make your very own per class. This is definitely a fun aspect of the game, and while I did find the stages to drag on way too long, they at least kept me engaged for the entirety of those sessions, even if I struggled with the inability to suspend a run through a set of levels and resume it later.

I don’t know if it’s just nostalgia for the 3DS game kicking in or not, but it still feels like that game was more engrossing and pick up and play friendly than COD, which definitely wants you to spend upwards to 20 mins-a half hour on each four level gauntlet, which can get very tiring if you end up messing up at the very end, or dare to tackle the harder difficulties where these levels last even longer. Luckily, there’s a fun way to mitigate that repetition, and that’s the brand new multiplayer features!

Offering both local and online four player support, I gave this a spin with my local multiplayer partner, and had a much better time going through these gauntlets with a buddy. The stages feel more made for the local multiplayer aspect, with one person monitoring the castle and the other wandering off to gain treasure, items, and taking out enemy spawners, rather than having to go all over the map by yourself to get things done. To make things even better, there’s online leaderboards for score chasers, and it appears to allow play with the original Japanese version of the game, too, leading to this being a super fun and handy way to keep the party going.

If you want to experience Cart of Darkness to the very end, I strongly advise doing so in multiplayer, since it completely improved my enjoyment of the game tenfold, and made it just as fun and addicting as the prequel was to me, mitigating my fears that the core gameplay was my problem, rather than the fact that the structure is just more focused on multiple players this time around. Indeed, there’s an awkward character switching mechanic, where you have to hold both L and R to tag out, but in multiplayer, you have the characters both acting out at once, leading to that pace-breaker no longer being an issue.

With all that said though, I do have to make a note on one aspect that might make or break this game for some people, and that’s the game’s localization. Let it be known, the original Japanese version is not some super serious dark epic like some folks may try to insist, and was equally goofy, as evident by the fact you had a bunch of unlockable Famicom parodies to attach to your classes to provide varying buffs, along with the nonsensical nature of the story. Indeed, I liked how in the 3DS localization, the game was super well written with lots of charm, with tons of absolutely hilarious moments.

Sadly, I didn’t feel the same sort of charm here, with most of the dialogue “jokes” being poor attempts at throwback meta humor that never landed right with me. I don’t know if it’s because I aged six years since the 3DS game, but upon going back to reread some dialogue from that title, I still find a lot of it really funny! Here in Cart of Darkness though, I just didn’t find myself caring for the humor all that much, and they also completely changed all the famicom parody games into parodies of every single NES game in existence. Honestly, that part alone is some dedication, and I do admit I had some excitement trying to recognize which game referenced what, but I never found much desire to hunt for all these cartridges, and when your game excessively tries to do funny ha-has referencing how the 80s and 90s were so weird, it gets old very quickly.

I do give props to the newsletters and faux advertisements you can bring up in the pause menu though, as I felt those stuck the landing and were a lot more clever than most of the other attempts at dialogue in the game. Still, if you were hoping for something either accurate to the Japanese Famicom throwbacks of the original version, or just something more funny and enjoyable like the 3DS game, you might be a bit disappointed. Or maybe it shows that you’re aging, who knows!

In conclusion, this new Gotta Protectors game is a fairly fun followup to that original game I discovered so many years ago. While I’m still not the biggest fan of the whole shift to the attacking castle mechanics, and the gauntlets of stages can get far too long for my liking, the core action is still insanely fun, and racking up combos is just as addicting as it always has been. The standout feature here is easily the multiplayer modes, and I honestly would recommend this more on that front than as a solo experience, as the amount of fun I had playing locally with a friend far exceeded any romps through the stages by myself.

Thankfully, with online and local options, those with friends and the game should be able to get that done with little hassle, and if you don’t mind lengthy stage gauntlets without the option to pause and pick it back up later, then this is a super fun tower defense that’ll keep you busy for a long while. Unfortunately for me, I found myself preferring the 3DS one just a bit more, as that felt far better for pick up and play purposes and seemed to be made with solo play in mind, unlike Cart of Darkness.

There’s also the notion of this game’s localization, which as I noted earlier, seems to be excessively cheesy for little other reason than because they felt like it, and while the 3DS game was that way too, I felt the dialogue in that game was far more funny and better written than the lines here, which can be outright cringe at times. Still, for those who love co-op games and great soundtracks, this is an absolute steal!

I give Gotta Protectors: Cart of Darkness an 8 out of 10.