Thanks to KONAMI for the review code

I decided to try and go with covering Undying Moon in its launch state for several reasons: for one, this is a notable game in that it revives the long-dormant sister series to Castlevania, something notable in itself, and the other is that the developers explicitly stated this game was made early access to get input from the community on what to improve and whatnot, after stumbles such as Contra Rogue Corps. Rest assured, I’ll be pulling no punches, and will even be reviewing the bonus game you get with this purchase separately: the Famicom original emulated by M2.

Unfortunately, due to life getting in my way the past year, the final game ended up launching a few months back, along with the Nintendo Switch port, and I didn’t get the review done in time. for a pre-launch state. Still, post-launch support is live and kicking, and there are cool tweaks being added now and then to make this experience more and more refined. Heck, one of the reasons I hesitated at points to cover this at certain times, is because the notes I would take on the game would become outdated by the next patch! Such is the risk when agreeing to an Early Access game, but I hope at the very least you guys enjoy my perspective as one who’s played this game off and on since the Early Access launch last May, even if the road to this review was bumpy for me.

Set many many years after the events of the original game, the descendants of the original Getsu Fuma hero must embark on a ferocious journey to stop the revived demons sealed away long ago! Now taking roguelike elements into account, just how does this trend benefit a long-dormant IP?

Right off the bat, when this game launched in the early state it was in, Undying Moon got big praise for looking absolutely gorgeous, with the art style mimicking paintings from years gone by, and indeed, Undying Moon has excelled with this look in the year since. The animations are decently smooth, the enemy designs are outstanding and pay tribute to old Japanese folklore, (with a few enemies reused from the original Famicom game, which also did this), and the backgrounds and huge bosses all look absolutely outstanding.

Having played this on two laptops, an HDTV, and now a Steam Deck, the game looks and runs great on all of these devices, and the resolution/visual options help to get the job done if it doesn’t quite run as well as you’d like. All in all, this game’s a stellar looking experience and I’m glad this team stuck with refining a lovely artstyle.

On the audio side of things, it’s a lot more muted. There is a remix of the classic Famicom theme, and the music across the board is decent enough, but it also heavily relies on old-time instruments, producing songs that fit the dreary mood of the underworld levels well, but don’t make for much of a compelling listen outside of the game. Part of me would have loved if there was an option from the get-go to enable the Famicom Soundtrack as you venture on runs, but otherwise there’s not much to say here, and the deluxe edition offers a sampling of songs from this very game for your own listening purposes.

While the original Getsu Fuma played like a take on Zelda II, (Despite coming out before that game) alternating between side view, 3D Dungeon, and overhead perspectives as you traveled the lands in search of mystical swords, Undying Moon completely ditches nearly every aspect of that original game except for some bits of the side-view stages. 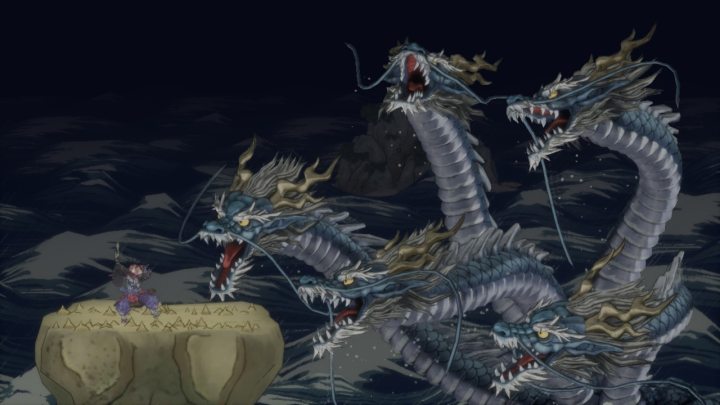 See, Undying Moon is a roguelike, following in the vein of recent hits like Dead Cells, and that means while the general themes of the stages and enemies present in them remain the same, the routes, items dropped, stats of items, among other things are all randomized for a different experience each time.

The start of each attempt begins at the Getsu Clan, where your selected character (being just Getsu Fuma to start out with) gets to choose a difficulty, pick up one of the randomly generated items, (unless you build a rack that lets you fix one of these starter items to one you’ve previously discovered) and head out to attempt the gauntlet. The controls are rather comfortable, my setup being the back shoulder buttons as your subweapons, (randomly dropped by chests or some enemies, ranging from firearms, bombs, knives, magic coins, among many others) the left bumper being your dodge maneuver, and your typical jump/attack/strong attack/item scheme on the face buttons.

Each weapon provides a different pair of attacks, both for land and mid-air combat, so finding a weapon type you’re comfortable with is the key to making some progress in this game. (I go with the Club and Katana, personally) Defeating enemies and going off the beaten path will lead to some helpful rewards, from gold, darkened spirits, magatama, and even other weapons you can pick up to replace your starting ones- or convert to materials if you’re fine with the loadout you have. It’s a pretty traditional gameplay loop for this kind of game, and usually when I played games of this kind in the past, I usually haven’t been hooked too well, usually because I rarely feel as if I’m making any progress or getting better at the game.

Indeed, in the early days of Undying Moon, I definitely clicked with the controls and concept quite a bit, but something about that gameplay loop just didn’t feel satisfying enough, leading to me getting stumped on how exactly I would even describe the game. Every now and then I’d pop back in and give it another go, and see some things tweaked and polished with a bit of balance, but nothing quite sticking the landing. Having tried again in the post-launch state with all the new stuff added however, and I am proud to say that Undying Moon finally clicked with me, both due to constant persistence on my end, and some smart balancing on the developer.

See, what I found to be the hook here, comes from how despite the randomized nature of the stages, I was able to eventually get better and better at them, memorizing how the enemies acted or what hazards to avoid, and even what materials to save for upgrades. As one example, tougher enemies, bosses and treasure chests can drop blue flames which provide the Getsu clan the ability to upgrade one of four options. These range from powering up the strength of your main and sub weapon, increasing your max health, or getting another of those very, very valuable health potions, which are super handy for boss fights or dealing with situations that you haven’t nailed.

In my first 2 hours of attempts, I mainly struggled to get through the first stage, and if I did make it, I’d barely do a dent in the ones to follow, and wouldn’t have the health potions to back me up. Eventually, I started to save resources and spend them on upgrades, making some items ridiculously useful if I stumbled upon them in a run, leading me to eventually clear the first stage without needing to use a single potion! So yes, you do feel a sense of progression and growth during Undying Moon, with the aforementioned upgrades, resource hoarding, and unlocking of helpful features such as the weapon rack and additional characters.

It definitely isn’t the fastest progression I’ve felt in a game like this, but once it all finally clicked, I definitely enjoyed my time with the game a lot more, getting the hang of countering enemies, choosing the right items, and slowly making inches of progress with each subsequent run. It definitely plays a hell of a lot better than the clunky combat of the Famicom original, and for that, I think Undying Moon gets a ton of credit for being a sequel that refines the original and greatly improves on it, even if it jumps genres in the process.

As of now when I’m reviewing this game (July 2022), Undying Moon is a gorgeous, satisfying Roguelike action game, that manages to have been refined in most of the ways I had issues with around launch, and provides for a satisfying gameplay loop despite not feeling all that much like the game it revives.

While I still much preferred the big connected world of the original Getsu Fuma at the end of the day, along with those cool 3D Dungeons and Zelda II-esque gameplay, this is still a worthy modern followup that manages to nail a lot of aspects right out of the gate, and for an early access game, that’s particularly impressive for me. Back when I last had notes and was inches from publishing the review in August 2021, I had a lot of praise, but noticed some clunkiness and quality of life could have been thrown in to make the experience even better.

Well, I’m happy to say the developers have accomplished making a kickass action game that I definitely see myself falling in love with on my Steam Deck, and while I am disappointed in myself for not getting this covered during the EA period, it definitely is in an outstanding spot right now, and with future tweaks here and there, this action game is only going to get better, and I am proud to say that Konami did it, they made an original, new game that’s super enjoyable and worth your time.