In this side scrolling action platformer, you take control of a pair of rookie agents, as their world is in chaos! Experimentation has led to a new species of creature known as the Spidersaurs to take form, mainly to be used as food supply in a dying world. Yet when they start going berserk, it’s up to the pair to stop the rampaging creatures, absorb their attributes, and make their way to the bottom of this.

This plot is rather typical, with plenty of voice acting thrown in here and there. There’s an animated intro that’s rather nice looking, and the characters are amusing enough to help move the story along, but the twists and turns are very predictable to the point that the main characters openly poke fun of it at times, so this really isn’t much of a story to take seriously, for better or worse.

Spidersaurs does not go for a pixel presentation, surprisingly opting for more of a style that mimics the likes of the more recent Shantae titles, only with much less polished animation. Still, the character and enemy designs are solid, with the male character Adrian reminding me an awful lot of Wayforward’s design of Max from the Advance Wars remake, funnily enough, leading me to prefer him as my character for this adventure.

There’s that opening movie I mentioned before, which also sports a cheesy as hell vocal song, but the in-game cutscenes from that point on aren’t really anything special, just consisting of basic interactions between the main duo and their superiors, though they still have funny voice acted dialogue to keep things entertaining. The action is nice and focused, and my co-op partner and I were able to distinguish powerups pretty easily, despite how chaotic a few of the platforming segments could get.

Sadly, the music isn’t memorable in the slightest. A bit of a shock considering Wayforward games have had a great track record with music lately, but a lot of the tracks in Spidersaurs were utterly forgettable and exited my brain as soon as the stage ended. On the bright side, the dialogue definitely didn’t, which ended up being the highlight of the sound department due to some clever writing here and there. Still, when even Shantae and the Seven Sirens had several iPod worthy tunes in it, I was rather disappointed to hear not one song I’d consider buying a soundtrack release for.

Spidersaurs is a co-op run and gun, not unlike the sorts of titles in the Contra series, including Wayforward’s very own Contra 4. Granted, this game is obviously not aiming to be the highest intensity action title or anything like that, but it definitely has some of that formula. Originally being an Apple Arcade title back in the day, this console version brings the experience home, with local two player co-op, where the bulk of my time with this game took place. There are three different difficulties to choose from, with the easiest setting locking out the true ending and true final boss, which unfortunately meant my friend and I hit an irritating trope that really needs to get out in games like these.

Still, our co-op playthrough was pretty enjoyable for a while, with each of the two characters having their own unique sets of powerups. has the traditional set of weaponry you’d expect from a Contra-like, while has more oddball weapons, such as an exploding football that acts like the crusher weapon from Contra, a rotary shield that is great for surrounding enemies, and a flamethrower that absolutely murders bosses and bulky enemies. Ultimately, I feel Victoria had the better weapon lineup, since they were the more familiar kinds of weaponry you’d expect from a game like this, but I do appreciate Adrian’s variety, even if he feels a bit more like a hard mode character as a result.

Each stage has a few sections to it, some of which are autoscrolling, and they do an OK job at adding some variety to make the stages not go on forever. You have infinite continues and checkpoints, which does make this a game you can comfortably beat with practice, (and what helped my friend to stick along with me for the entire game, despite not being the best with this genre) and the stages all have minibosses and boss fights, which I found to be the highlight of the game, since all of them do have predictable patterns that are easy to learn, yet tough to master. Of course, if you bring a powerful weapon into a boss fight (or switch to an equally strong backup weapon), that’ll make things a whole lot easier, since your default shot is a pitiful pea shooter that takes a long time to dispatch bosses with. Still, it’s your standard run and gun fare, with a bit of jank here and there. 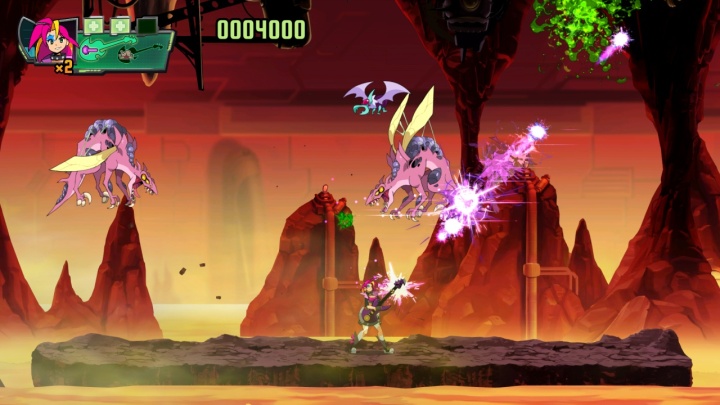 Unfortunately, the jank is more apparent in the co-op mode, where several times my friend and I had something funky happen during the playthrough. Nothing that forced a reset of the game thankfully, but still weird bugs that completely baffled us, ranging from a part during the tutorial stage where one player could be scrolled between the left side of the screen and a platform they can’t jump on, (and being unable to scroll left, I had to get dumb luck with an enemy damage boosting me to get unstuck) and a part on the final stage in which scrolling too fast with your abilities can leave the other player stuck under the kill plane, locking the screen but forcing them to stumble blindly back into view. These sorts of bugs are pretty irritating and it makes me suspect that the co-op in this game wasn’t really that balanced, as I had a far less troublesome experience going through the normal difficulty by myself.

Speaking of those abilities, that’s another neat part of Spidersaurs. Each stage you clear, the boss enemy will drop meat, that will provide your main characters with a new ability, ranging from double jumps, web propellers, a forward dash, and more. They don’t help out too much but unlocking a speedrun mode where you have them all from the getgo after beating the game once was a great incentive to mess around with them some more, and the webs combined with the double jump can lead to vertical ascents getting broken in half. (which led to one of those aforementioned bugs in the co-op mode) These abilities won’t light the world on fire or anything, but they’re still a nice bonus for progression and keep the game interesting enough to stick around for.

In conclusion, Spidersaurs made for a fun hour of co-op with my friend, but this definitely ain’t no Contra 4, that’s for sure. The level design is meh at best, the bosses, while the highlight of the game, can feel like sponges if you don’t have any weapons equipped, the abilities were cool, but more useful in subsequent playthroughs, and the surprising amount of bugs we encountered during our playthrough definitely soured this experience more than I had hoped. The bonus modes you unlock upon beating the game are a decent incentive to replay, as are the multiple difficulties, but at the end of it all, Spidersaurs is just an average run and gun with lackluster Co-Op, a huge shame considering these devs made one of the best Co-Op run and guns many years prior, yet the co-op action here doesn’t even come close to that level of fun.

Still, if you can look past the faults here and don’t mind a bit of jank here and there, you’ll be able to enjoy this game well enough to get one playthrough of fun out of it at the very least, and I do believe that this formula has potential to be expanded out more in a bigger and better sequel, preferably one that doesn’t have any Apple Arcade baggage, and with hopefully a lot less jank with the co-op.