Thanks to Aksys Games for the review code

In this horizontal shooter, you take control of two pilots who set out for the mainland after escaping the horrors of a fierce war, now that alien invaders have taken advantage of the war-torn world and obliterated the weaponry systems that could stop them! Thus, the two pilots and their outdated tech are the only ones that have a fighting chance.

While plots in shooting games aren’t usually anything besides an excuse for why stages are the way they are, Horgihugh is surprisingly dark in tone with its backstory, and some of the objectives for a few of the stages do an OK job at working with the whole “imminent world destruction” setup they’re going for here. Granted, you won’t get top tier writing or anything and most of the focus is on the action, but it does come off as an admirable attempt to be a plot about the horrors of war even in this abridged, cutesy form.

Right off the bat Horgihugh makes its Konami inspirations very apparent, from sound effects that mimic ones from their classic shooters, the pixel art focus, and even some of the weapon and boss designs. (The first boss outright brings to mind that of a foe from Thunder Cross II) That isn’t just due to the dev being a megafan of the genre, since one of Konami’s vintage composers contributed to this game by making some of the sound!

The music isn’t nearly as iconic as those classic Konami shmups, but it still ends up forming a list of catchy songs that’ll get stuck in your head, even if you aren’t too fond of the compositions themselves. Sound effects are rather generic and get the job done, but the pixel art and overall look of the game is what gets the biggest praise from me, for the in-game sprites are absolutely adorable, both for the player characters and their foes, with a kemono world filled with bizzare alien creatures and obstacles.

Another major part of this game is Eterday, a weird town building aspect where you use collected currency from playthroughs to restore a town and purchase upgrades for the main game. This side mode also uses some really good sprites, and the music here is a nice relaxing change of pace from the main action.

Horgihugh is a horizontal shooter, tasking the player to choose between one of two characters to rush into battle against the alien forces! Despite the multiple characters, there isn’t a co-op mode of any sorts in this game, which is a bummer since the two characters appear to be perfect for such a title. Nevertheless, you have the main dog, Hugh, who’s the typical ordinary shooting plane meant for genre veterans, or his cat friend Figaro, who’s more of an easier option due to an invincible AI controlled Hugh assisting her during the adventure.

Whichever animal you choose, they’re both aided by a scientist who’ll drop the occasional powerup, and even fly his shop down for you to exchange the collected gems you obtained for powerups. These range from classics like a Ripple Laser, a multi-directional bomb, even weapons akin to the oddball ones from Gradius Gaiden such as a pulsating field, or the most helpful, extra lives. These gem fragments are also used for the aforementioned Etraday mode.

Alongside your main shot is a somersault technique, used when the energy meter is full and tremendously helpful for dodging enemy fire and absorbing dropped gems from enemies. Not too unlike how it as done in Sky Kid, only much, much more limited in usage due to being on a cooldown, leaving for this technique to be more or less used as an emergency escape. With these techniques, you move through stage to stage, defeating enemies, getting gems, powering up and then fighting against the main boss of the stage, trying to take them down before they take you out. Death leads to you immediately rushing back to the scene, but if you lose all your lives, it’s Game Over and you’re sent back to the very start of the stage.

Unfortunately, this is where Horgihugh gets a little bit too old school for its own good, mainly due to how this game has some odd design choices and irritating difficulty spikes. You see, continuing sends you to the very beginning of the stage, which seems fine enough, except for when you’re on the end of one of the more lengthy ones, dealing with a really hard boss that rips through your lives in no time. Being able to easily memorize the rest of the stage only to slowly slog through it all just for another boss attempt is incredibly frustrating, making me bewildered at the lack of checkpoints in this regard.

Yet another frustration I commonly noticed before getting stuck on a really painful level, was just how much of the game relied on stupid “gotcha” techniques, a little more than I felt was needed for a game like this. Some bosses telegraph their attacks just fine, but others will literally ram into you or do a move without much of a visual warning, leading to inevitable moments where your first time on a stage will end in taking cheap deaths. It’s even more annoying when you’re minding your own business flying to a boss only to have an enemy zoom at you from the side of the screen and kill you before you even noticed that they exist! Of course, memorizing all this with trial and error will make the stages an absolute breeze, especially on easier difficulties (where bullets are reduced in quantity and speed), but I definitely felt some aspects of the game design could have been telegraphed better.

Another gripe, though one that’s very stage dependent, is how some stages vertically scroll manually, and thus, if you’re in need of having to move up or down for whatever reason, assuming nothing’s coming your way, it can be ludicrously annoying to move upwards on a stage only for the camera to barely follow you, causing you to suddenly realize there’s an enemy/ceiling coming right at you and leading to another death, making Level 3 way more annoying than it has any right to be due to the sheer amount of ceilings and turrets in that level. 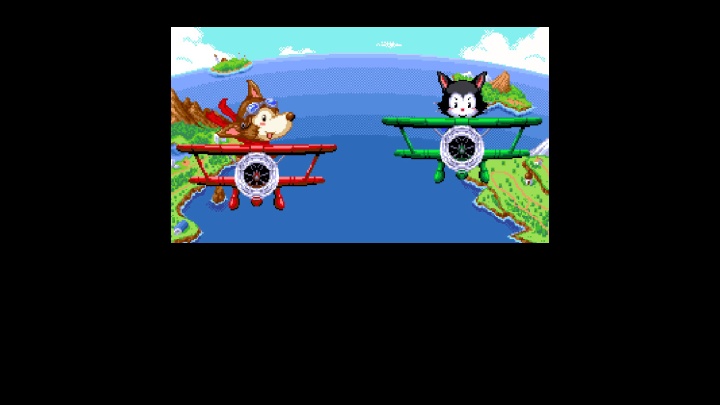 Lastly, is the Etraday town, which serves as a main hub for using your gem fragments. Here you can buy upgrades for the town, which gradually expands to include new facilities to help you with the main game, whether they range from upgrade shops, a sound test, or more.

Yes, this does mean that resisting the urge to spend gems in the main game’s shop significantly speeds up the grinding process for unlocking stuff, as the shops here do have some super handy QOL aspects to them, mainly ranging from staring the game with a better weapon level, getting more gem fragment drops at a time, to automatically using the somersault if you touch a hazard while the meter is full. (basically the game’s equivalent to an Autobomb)

With several of these upgrades, I had a much smoother time making it through the main game and dealing with some of the gripes I had with the difficulty spikes, but I also can’t help but feel how silly it is that there’s even a currency system in a shooter to begin with, let alone to unlock QOL and extra game options. I didn’t like when Fantasy Zone did it, and I don’t like it here.

With that said, you can max out Eterday and run out of stuff to purchase, which should get you set for the rest of the game and provide a lot of extra assistance for the stages. However, there’s no other modes (so no Caravan or Boss Rush modes for you) and little purpose to hoarding the gem fragments after the upgrades are done, and while there is a local high score saved for the same, there’s no local or online leaderboards of any sort, which is a huge shame, as the replay value could have been a lot better if there was more reason to return to the game for scoring/challenge purposes. In the end, the main goal is really to just beat it once, leaving Horgihugh as a one and done experience, albeit one with a lot of charm to it.

Horgihugh does a decent job at being a shooter with retro inspirations, paying homage to a lot of Konami titles in particular, but unfortunately the core game is rather messy and just not that fun to go through, especially with the weird balancing and upgrade systems. The Eterday town idea is cute and all, but when QOL elements are locked behind grinding for it, it leads to the core game feeling rather rusty, especially with frustrating difficulty spikes and gotcha moments.

Nevertheless, there’s still a ton of charm to Horgihugh, from the great art style, catchy tunes, fun powerups, and decent amount of stages to fly through, so if you’re up for an unbalanced, rocky challenge, you’ll still find a passion project that’s well worth at least attempting to give a full clear, and as you expand the town up more, it definitely becomes more and more possible. I’m still not a fan of padding in my shmups, but I also can’t deny how satisfying it is to get everything memorized and nail a perfect run of a level after many attempts at doing so, growing more powerful with my attempts.

There’s really no content outside of the main campaign and the Eterday stuff, but I can’t deny the amount of passion and care that went into this game even with my gripes, so I definitely think Horgihugh is still worth a playthrough, even if you may have to rely on upgrades to get the most out of it.

One thought on “Horgihugh and Friends (Nintendo Switch)- Review”