In this Arcade game from 1990, you take control of one of four warriors who must set out on a quest to stop an evil Dark Warrior from opening up the Gate of Doom with two royal treasures! As per the norm at this time, there’s little importance when it comes to the actual story, although unlike most Arcade games which throw the story away until the end credits, this game does give you small scenes after every stage, where the king tells you where to go next and why you’re doing so, giving a reason for why you’re going all over the place.

And yes, the Johnny Turbo in the title is indeed that Johnny Turbo from the Turbografx days. Sadly, this isn’t a TurboGrafx game nor was this ported to that system, which seems to make this an odd choice for the branding.

If you take a look at this game in the eShop, you might be terrified at the potential for a port with an awful emulated display of forced widescreen. (since all the images on the eShop sow the game in full 16:9 mode) Thankfully, the game does NOT force that 16:9 aspect ratio on you, and in fact allows for a good variety of display options and filters, even moreso than the Hamster Arcade Archives and ZeroDiv releases, as you have the options of making the game play at the abnormal 16:9 display, or a proper, 4:3 aspect ratio, along with being able to turn on a variety of filters, from the usual Scanline filters along with filters for RGB, Composite, S-Video or even VHS. Of course, if you’re someone who prefers their games to be crisp and clean like myself, then you can turn all those filters off and leave it on 4:3 for an accurate looking experience.

The game itself looks fairly decent for a game from 1990, going for an isometric perspective that works rather well and doesn’t hurt the eyes or cause distance problems, even during boss fights! Considering how many isometric games make the easy mistake of bad depth perception, this was a surprise to see. The music is also surprisingly good, with memorable tunes to be gathered from most of the stages. There is an oddity when it comes to the music, however and that’s the fact that sometimes during Stage 1 or 3 the music will just speed up randomly for no reason at all, which I assumed was an emulation issue until I looked up a gameplay video of the arcade original, which also had this issue, so it’s really just a quirk of the arcade version. Still, it’s something to be aware of, along with the usual slowdown when lots of enemies flood the screen.

Gate of Doom has a very basic control scheme, only requiring the use of two buttons throughout the entire game. The A button fires your character’s attack and the B button activates a magic spell when the meter on the side of the screen fills up to the max. You and another friend (via local Co-Op) must travel through multiple stages as you fight hordes of enemies, making your way through the multiple doors in those stages in order to fight minibosses and bosses to clear each stage. 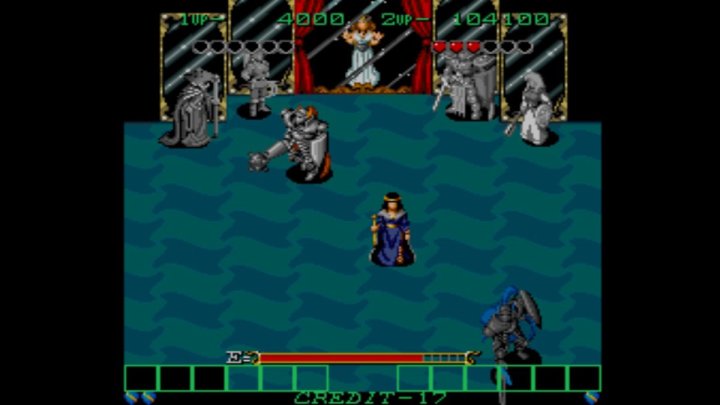 With the simple control scheme, Gate of Doom is a very basic Arcade game, and the only things to really make note of are the multiple classes (The knight has a spin attack that has bad reach, the Wizard is the best of them all and is really powerful if you are good at button mashing, the bard has a long range spear and is immune to poison, and the Ninja is very fast at the expense of power) and the multiple magic spells, (which depend on what page in the magic book is exposed when the spell is activated) from a tornado, thunder cloud, Medusa head to worthless ones like turning into a pig or group of rats.

Now all that’s left to discuss is the general emulation features that this Johnny Turbo Arcade version offers, which I assume is how most future titles in the lineup will be ported. Besides the aforementioned video filters and features, the game also allows for one save state, which is what’s used whenever you go to the “Continue Game” option on the main menu. Outside of that, however there isn’t much else to discuss. For some odd reason it lacks any sort of difficulty/DIP Switch options whatsoever, which I find hard to believe considering how this version of the game starts you off with three health points while other versions seen in gameplay videos start you off with four, and there doesn’t seem to be any way to change these settings from what I could find in the menus. (Although you can get extra health points throughout the game by passing by certain health stations, so it’s not like the empty spots on the health bar are completely worthless)

The next oddity comes from the fact that there’s no way to remap the buttons at all, and while in this game it doesn’t really make much of a difference due to the control scheme, (really the credit/start buttons were all I wanted to switch around to make them akin to the ACA series) it does seem like an issue that could plague future games with more complex controls.

In conclusion, Gate of Doom is a fun retro classic that is an enjoyable way to spend an afternoon with a friend. Whether it’s to beat your own hi-scores (if you remember to use the save states to save them properly) or try to beat the game without continuing, (good luck with that due to the difficulty setting and the traditional arcade nature of enemies spamming you with attacks or status conditions) this game can be fun to replay even once you’ve completed it, as it doesn’t really take that long to complete when you credit spam. While the PS4/XB1 versions of this port aren’t out yet, and thus I can’t compare the replay value to versions that could potentially pack lots of clever achievements to give hunters a platinum trophy/1000 Gamerscore, I can safely say that this Johnny Turbo Arcade port is very solid, and brings the game home for what appears to be the first time ever! It may not have the online features of the Arcade Archives series, and the features of the emulator could use a bit of work for future installments, the core game is still a lot of fun with friends, even if it’s standard as far as arcade games go.

Here’s hoping the game’s sequel, Wizard Fire gets launched via the Johnny Turbo Arcade line, along with other arcade gems Hamster won’t get to for a while like the first Magical Drop/Chain Reaction, Tumblepop or Peter Pepper’s Ice Cream Factory, as this brand seems to be another promising one that will add to other publishers releasing retro content such as Zerodiv and Hamster. I give Johnny Turbo’s Arcade: Gate of Doom a 7 out of 10, and recommend it for arcade action fans who want a good time, but not so much for those expecting the amount of options of the Hamster ACA releases or for newcomers to these old arcade games.