Heavy Burger may seem like something that defies reality upon glancing at the Switch eShop screens for the game. It’s under the same banner as the Johnny Turbo Arcade series, which are ports of old Data East games. When I saw how the game looked in screens, I was completely confused, considering that not only did the pixels look so, so much sharper than the prior games released via Johnny Turbo’s Arcade, but despite the old school arcade banner and the arcade borders, this was not a game I recognized.

Lo and behold, it turns out this is a new game meant to be a crazy multiplayer crossover bringing several Data East games such as Bad Dudes, Side Pocket, and Lock N Chase all together into one package, while focusing on Peter Pepper from Burgertime getting a gun from Heavy Barrel to steal money and going to a bank. It’s as absurd as it sounds, and sure enough each “section” of the map you fight on is based one of the represented games. The pixel detail on each of these sections are surprisingly accurate to their original games, just with more frames of animation to make up for how things work here.

The backgrounds and assets are pretty much identical to their source material, while Peter ends up getting some smooth new animations that oddly don’t feel out of place at all, despite all the clashing styles. (Going from DECO based Lock N Chase to 16-bit Bad Dudes might seem like it could cause a visual headache, but they manage to make the transitions work well, since Peter’s sprite is a mix between his original Burgertime one with a bit more color to it. You can even unlock old arcade flyers for the games represented as stages if you do enough single player challenges, which is a nice bonus since they still look pretty cool to this day.

The sound is not that bad either, using some tunes and sound effects from the source material depending on which section of the game you’re in, and everything seems lovingly crafted in a way that’s pretty surprising considering how we went from a version of Nitro Ball with a blurry filter that was forced on, to a game paying tribute to other DE classics that look and sound very crisp and gives the source material the respect they deserve while also making something brand new out of it.

Heavy Burger is best described as a new version of Tug of War, only this time there are guns and obstacles from Data East games out to get you. Each session starts with up to four players choosing whether to be on the Red Team or the Blue team, before they’re thrown into a factory stage where a money bag is deposited in the center. Whoever gets the bag first will claim it, making it so that anyone on the opposite team will be able to steal the money bag by killing the player holding it and moving to the opposite end of the screen.

Regardless of which team you’re on, the goal of reaching the Bad Dudes arcade machine and dropping the money off at the bank remains the same, and each team has to go through a selected order of machines in order to make it to that point, so if you’re on the red team, one machine away from reaching the Bad Dudes one, only for the other team to claim the bag and backtrack over to their side, then you’ll have to deal with them making their own journey, hazards and all. It’s almost too frantic to properly describe in a way that makes clear sense, but all you need to know is that the ZL button is for dodging, and the ZR button is for firing any weapons you pick up. Combine those two skills to kill the other team while also stopping any obstacles that come out of the arcade machines, and you’re golden.

When playing alone, Heavy Burger doesn’t really offer much to do outside of practicing the game with AI players, or taking on some single-player challenge missions that task the player with going through a round of Heavy Burger with specific settings turned on, such as one arcade machine repeated over and over again, a super aggressive AI, or dealing with all of the above plus more enemies than normal. These challenges are really nothing special and the only thing you really get from doing them all are the aforementioned posters of the games paid tribute here. Considering the $20 price tag, I had a tiny bit of hope that maybe this game would go the extra mile and allow you to either play the original games right from the gallery, or would offer some sort of new minigame themed after each machine. Alas, you don’t get anything besides a minor unlockable, but it at least gives you something. 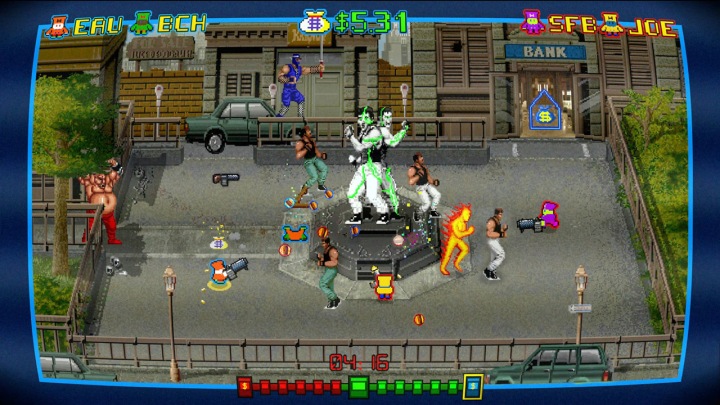 No, the true fun from this game, and the only way you’ll actually get the most out of all this is if you play with a group of real friends in person. There’s no online multiplayer, so that’s also the only option if you want to play with anyone outside of the AI, too, but it becomes well worth inviting pals over. What used to start out as just a chaotic tug of war against an AI, ends up as a frantic, super competitive experience that two friends and I found to be an excellent way to kill time for an hour, and quite possibly one of the most entertaining multiplayer games so far. You see, with real people, this game’s tug-of-war nature really shines through, since even the toughest AI doesn’t show as much determination to steal that money bag from you as a group of real people, even those who play for the first time ever. Ironically, the enemies and obstacles from the setup of Arcade machines are the usual cause of death, rather than any CPU opponents you may or may not choose to add to fill in empty gaps you have.

Suddenly, the urge to chase a high score became pretty meaningless, since the free-for all nature of this game reminded me of just how fun four player party games can be if done right, and Heavy Burger did manage to succeed at providing plenty of laughs and close calls that not many games this year managed to pull off. Despite all the fun we had, the customization is unfortunately rather light, so once you think of several ways to shift the arcade lineup around, you’ll eventually start retreading the same stages over and over again. This is more suited for long-term play with many different groups of friends at a party, rather than for someone you keep inviting to your home every weekend.

In conclusion, Heavy Burger is a fantastic multiplayer game, taking the frantic nature of a twin stick shooter and making it into an ultimate tug of war. During the time spent with a pair of friends, we had an incredible time together, although the fun didn’t really last for that long. While this game is incredibly fun and has a stellar formula, the game itself is very light on content considering the $20 pricetag. The single player missions are a great way to practice for any frantic multiplayer matches you set up with friends, but the lack of online multiplayer or anything to really do in solo makes this a very tough recommendation at the steep price.

If you have friends over weekly like I do, then this is a no-brainer and one of the best multiplayer games to come out for the Switch in 2018. But the lack of an online mode or anything else to do really hurts the value for those who may not be as fortunate to get a good amount of friends over. It’s a very well made tribute, but you may want to wait for a sale for this serving.