Thanks to Matt Glanville for the review code

At first glance, this game looks a bit similar to Downwell, with a UI on the top portion of the screen (though instead of indicating your life points, it’s just a power-up meter), and a variety of custom palettes and sprite colors to choose from. But while it is a arcade score-chaser that uses a vertical display, it plays completely differently, even if the art style looks a bit close.

The cool thing that you can do is that you can freely customize the colors of each enemy, powerup, and object on the screen, making your own palettes of sorts. Unfortunately, you cannot save these palettes and switching to any of the pre-made ones will just erase it, but the amount of palettes you can play around with and unlock are pretty neat. Combine this with a vertical mode that makes this game super crisp looking, and Switch N Shoot is a pretty decent looking game.

Switch N Shoot’s main gimmick is that everything is controlled with one button. Any of the face buttons, the touch screen, or the D-buttons will cause your ship to fire a shot and move to the left or right sides automatically. Press the button again to shoot and move in the opposite direction, and repeat for the entire game. Crash into an enemy at any point and you die, unless you have a shield powerup that will let you take an extra hit. 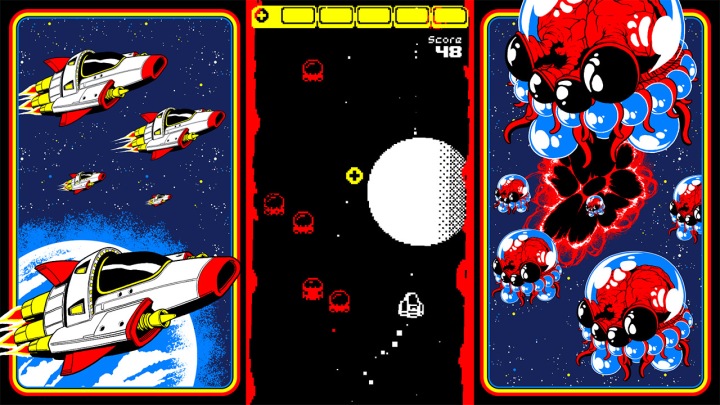 So with these really simple rules, it should be no surprise that this game progresses at a speedy pace. While runs can end in less than a few seconds if you aren’t careful, they can go on for several minutes once you get the hang of dodging and shooting. Since the main focus is getting a high score, that’s really all you can do, but that’s not bad, since I still really enjoy those titles.

Powerups are how you move from sector to sector. Your weapon starts off as a thin shot, before eventually growing bigger, wider, and splitting into multiple shots at once, all ending with a big laser that constantly fires, but is so powerful that the screen will close in on you, so you can’t ignore the powerup coins to farm for points, especially since you will also go down a level if you miss a coin, with the closed screen still in effect if you got the laser. Luckily once you move onto the next sector the game loops and gets faster, so the enemies are still the major threat. 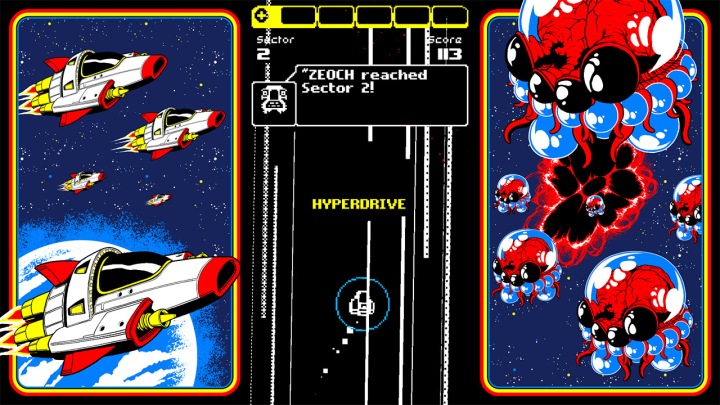 The only real gripes I have with this score-chasing nature of the game is that the names that are picked for the local leaderboard are completely randomized. This is mostly fine since it still shows your highest score on the main menu, but if you have friends over and take turns playing the game, it can be hard to indicate who did what on the leaderboard. I kinda wish they allowed you to color-code the names or something if the developer was insistent on pushing the randomized names. That or some sort of online leaderboard support would help push this game’s replay value a bit more, even though it’s a pretty fantastic score-chaser.

Switch N Shoot even has an arcade version available, believe it or not. It’s very limited, but I was able to give the game a shot at a local arcade. The differences between this and the Switch version are simple, in that there’s no palette options to speak of and it’s just going for a high score, with a big red button as the main control scheme. The randomized names are an even bigger issue here, since an arcade setting is more likely to benefit from manual names due to how there’s only one that can be the top score. Still, it’s an interesting conversion.

In conclusion, Switch N Shoot is a really addicting score-chaser that’s perfect for vertical play. Whether you have a flip grip or not, playing this in vertical mode is strongly encouraged, since the higher resolution will help you see all the details and appreciate them more. While it works perfectly fine and I think this will be a game I’ll revisit like I do with the many Arcade Archives titles to improve my score, I do think the randomized names, the lack of saving custom palettes and lack of online leaderboards do hold this back a bit from being as great as it could have been.

If you don’t tend to play these games with friends and just want to score-chase solo, then this is an absolute steal at the near $5 pricetag, since it’s a very refined game and I honestly found it to be a more engaging vertical score chaser than Downwell, even though I miss the online leaderboards which that title sported. Still, arcade fans should really give this a look, and not pass this up!