Thanks to PQube for the review code

In this action-adventure game, you take control of a hero who sets out to defend a kingdom from an evil Dark Lord known as Valion, by gathering four elements to combine them into light to purify the darkness.

At first glance, it’s very easy to think of Aggelos as a Wonder Boy knockoff, since it uses a similar art style and color palette to the Master System games. However, once you play and see this game in motion, you’d be surprised on how this comes off as less of a uninspired knock-off and more of a love letter to the Master System as a whole!

For starters, the colors are really sharp, just like on a real SMS. There’s no flicker like on the real thing, and the game is widescreen, but the game really does look like it came from a SMS. It’s shockingly accurate to the point that whenever you open the item menu, even the few seconds of pausing it takes to open the menu is very similar to how some menus in games like Ys, Alex Kidd and Wonder Boy. It’s authentic in all the good ways without being cumbersome.

Likewise, the music and soundfont is almost identical to a SMS’s PSG soundchip. Some songs sound a bit too close to some classic Wonder Boy tracks, but all the tracks are catchy and managed to get stuck in my head, and felt like a perfect fit to Aggelos‘ visuals.

Being an action-adventure title, Aggelos plays like your usual side-scrolling metroidvania, taking a bunch of influence from Wonder Boy, most specifically Wonder Boy in Monster World, with a bit of Zelda II influence as well. 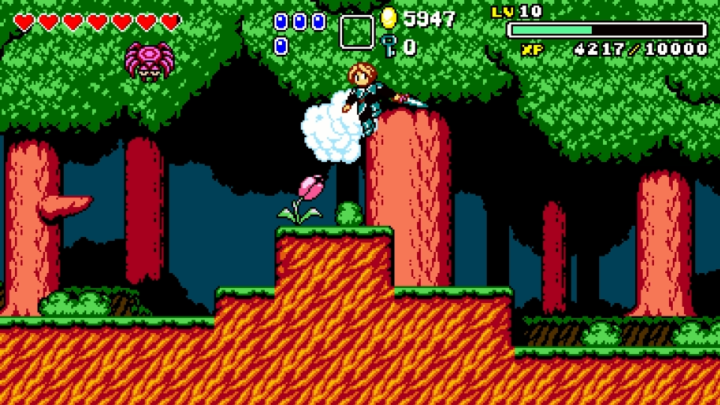 Unlike a modern metroidvania, you don’t really have a detailed square by square map to rely on. Instead, the most detail you’ll get out of the map provided in the menu is a general idea on where every part of the world is, since it’s styled more or less like the maps back in Nintendo Power for titles like Castlevania II. Still, it’s pretty easy to navigate, since the entire world is interconnected and you can eventually get an item that will let you teleport to any of the save points scattered around the world.

Of course, being a Wonder Boy inspired game, combat and upgrades are the main focus of Aggelos, and it even tries a few things from Zelda II as well, most notably the EXP system. While you can get better equipment over the course of the game, which is crucial to surviving the later dungeons, defeating enemies will also fill up an experience meter. The higher your level, the higher your attack and defense will increase. While the increase isn’t as much as a brand new piece of equipment, it can still help in a pinch, though I never really found the need to grind EXP at all during my playthrough.

So as you continue onwards throughout the game, you’ll get the hang of your basic melee attack before getting elemental upgrades in each dungeon. Using the A button, you can perform a variety of moves, from an attack that can create temporary platforms, a bubble shield that can be used to glide around, a fireball that can open a portal, and a lightning dash that can break through walls.

While none of those upgrades are as useful in combat compared to your main sword, there are also some upgrades for your sword as well, which are much more useful. From a downwards thrust, an upwards attack, to a multi-hit attack performed via a Street Fighter like button combination, all of these upgrades help significantly during the boss fights and some are even needed to progress.

Speaking of bosses and enemies, Aggelos mostly excels in that as well, with well-designed enemies, bosses and a great flow that makes the game get going right from the start! If you wish, you could even snag a dungeon item without beating the boss and use it to sequence break a bit, which still makes the game flow relatively well. 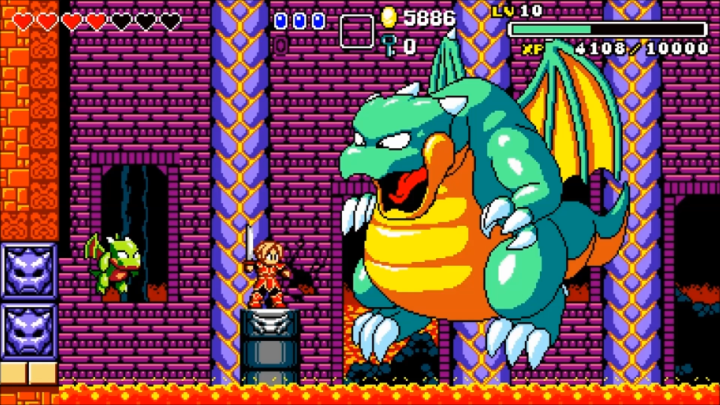 However, whether you follow the sequence of events or not, there is an event that occurs near the end of the story which honestly broke the game for me for a while, and that comes in the form of a massive difficulty spike. You see, after you progress with a sidequest that’s required to reach the final element, powerful darkness will flood the world, causing every area to have some of these darkness monsters lurking around. The problem is that when you’re at the point in the game where you can take them on, they can kill you in two or three hits, and even if you grabbed every possible heart container for extra health, they’ll still do quick work of you until you reach the next part of the game and buy the next set of equipment.

Luckily, death is a slap on the wrist as you only lose some EXP and get sent back a bit, with all your progress intact, but it still is really annoying to have this segment of the game suffer from a giant difficulty spike, which can even repeat if you try to take on the final area without the titular Aggelos equipment, which is hidden throughout the world and requires some out of the box thinking to properly use.

It’s a shame too, since the pacing and difficulty balance is excellent besides those two sudden spikes, and this is just on Normal difficulty. If you don’t feel like that’s challenging enough, you can also go with the Hard difficulty which increases the damage output from enemies and can make even the simplest parts of the adventure a bit frustrating. Still, Aggelos hooked me, and the flow of exploration was done so well here.

In conclusion, Aggelos is a fantastic metroidvania well worth your time, especially if you’re a fan of the recently released Monster Boy. What seemed like a shameless knockoff ended up being a near-perfect love letter to the Sega Master System that wasn’t afraid to try a few new ideas while being an addictive experience from morning to end. Unfortunately, the difficulty spike near the end of the game can come off as a big frustration for some, and is a small downer on an otherwise outstanding game.

Regardless, Aggelos was a big surprise. Having played a bunch of Metroidvanias in the past year, most of them ended up being well-made but lacked some sort of hook to keep me playing, and the few that did ended up being something that went above and beyond. Yet in this case, the game benefits from going back to the roots and being a throwback done right, going for both authenticity and accessibility that made the six hour adventure well worth every single minute, even during the frustrating bits. If you enjoyed games such as Monster Boy, or just have fun memories growing up with a Master System, then Aggelos is easily a must-own, and it’s one of my favorite games of the new year thus far!