Access Denied is a series of logic puzzles that consist of a variety of challenges, and thus, the game doesn’t really take much to work. So for this, you’re stuck with being in some basement filled with computers and other tech, as annoying rain plays in the background… Thankfully, you can turn this off, but doing so mutes the entirety of what you hear outside of the sound effects. Is a game bad without music?

Honestly, the puzzles in this are short enough that I didn’t really mind the semi-silence, and the game gets the job done, even if it looks fairly basic and was clearly made with a touch screen in mind.

The main goal of Access Denied is to solve all the logic puzzles… And that’s it. There’s 36 puzzles to solve, and as mentioned before, they task you with trying to figure out how to open a box through a variety of means. The game’s touchscreen roots are very apparent, as you control a cursor and use the X button to push down on the screen, with the DS4 touchpad being available as a shortcut if you prefer that.

Starting out, the puzzles are fairly basic, and they’re easy to figure out on your own, but around the tenth puzzle or so things get a bit trickier. Usually, you have to look around really hard for a hint on how to solve the puzzle or even what to do, and it’s a fine difficulty curve. 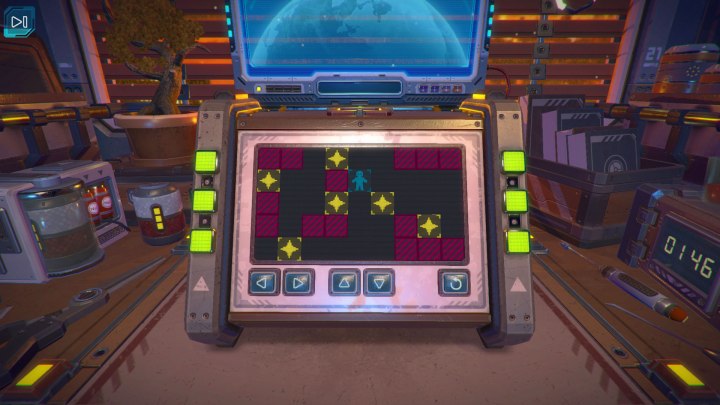 However, if you get stuck on a puzzle for several minutes, you can press the O button and move onto the next one, which is very handy since a few now and then made me stumped to the point I had to resort to a guide to beat them.

With that out of the way, I basically explained the entirety of the game! It’s just a set of logic puzzles, and they’re fine enough. My biggest gripe comes from how the game controls, since even with the DS4 touchpad, it doesn’t really feel as snappy as a real touch screen, and doing things such as pushing levels and turning knobs feel a lot slower than they have every right to be. All in all, I got bored rather easily while playing this, and even coming back to finish this review, the game didn’t really engage me all that much. It’s fine, but nothing more.

In conclusion, Access Denied is an inoffensive puzzler, but it really doesn’t have much going for it. You have over thirty logic puzzles to crack, and while it can be fun trying to figure out solutions on your own, these get pretty damn tricky around fourteen stages in, and while some of these were easy enough to figure out, others I had to cheat to win by using a guide to give me the answer, while some of these required that you pay attention to very obtuse hints with little definition.

At the end of the day, the game is still very barebones and doesn’t offer much in terms of variety. Considering how clunky Access feels to control thanks to the DS4 touchpad and buttons, you’re also better off buying this game on a touch-compatible device if you have that option, and once you beat all the puzzles, there’s really little reason to go back, since the platinum unlocks after you do them all. For $5, it’s fine, but you’d probably enjoy a brainteaser like this a bit more elsewhere.