In this compilation of strategy RPGs, you take control of one of two lords: Ledin or Elwin, as they set out to defend their kingdoms and unlock the powers of the holy sword Langrisser!

For the most part, the stories in these games are fairly simple, especially in the case of the first Langrisser. However, the sequel gets a lot more in-depth thanks to the addition of alternate routes that activate depending on actions in certain chapters. The first game also gets this near the end of the game, with these being new to the remake version, but I stuck to the A path for that game. Still, it adds a fun bit of replay value that leads to even more fun.

By default, the Langrisser games in this compilation look fairly… Average, to be blunt. The human units look as if they were ripped out of Fire Emblem Heroes, re-skinned to avoid copyright infringement, and smacked onto generic backgrounds with a stock anime art style that I’ve seen tons of times by now. The menus are easy to navigate though, and the enemy commanders/monster designs are still pretty well done and much better looking than the usual humans.

The music is also fairly solid, with decent remixes of the classic themes that at times fit the mood of the original themes, while at other times it feels a lot more tame and laid back. Still, it’s a solid set of remixes, based off some really fantastic original songs.

Speaking of original songs, the biggest saving grace of the presentation is that you can choose the original Genesis soundtracks for Langrisser I and II, right from the options menu, and these 16-bit chiptunes sound far, far better than the remixes, holding up remarkably well today with some excellent map themes.

Not only will they give you the option to play with the genesis OST, but released at launch was a DLC bundle of extra soundtracks from several other versions of the games, including the legendary PC Engine CD Rom and PC-FX soundtracks for Langrisser I and II respectively. These are without a doubt, the best versions of these songs to exist, making that DLC pack a must-own if you want the best possible arrangements of this soundtrack.

Along with the older soundtracks being an option, there’s also an option for the classic 90’s character designs used for the Genesis, Playstation and PC Engine versions of the game, though this is a bit more limited in scope, since it only affects the major characters and not the generic enemy grunts or the characters in-battle or on the map. (there is an option to make the map backgrounds match the Genesis versions, for what that’s worth, and I much preferred that.)

The two Langrisser titles included here play like your standard strategy RPG, and a lot of traits you may notice from other retro RPGs apply or may have even come from this game! In a way, the games feel like a mix of Fire Emblem with some Military Madness/Advance Wars elements thrown in, and it holds up very well after all these years.

Starting with Langrisser I, this first game is a very standard strategy romp, with a mostly linear progression and a pretty standard story for the genre. Here, you go from chapter to chapter, completing basic objectives that usually just task you with taking out a certain commander or all the enemies on the map.

This flow works fine, and the combat is pretty fun. Like most strategy games, you have your main units that can be equipped with weapons and skills to fight and better prepare themselves, and after they level up, units start to gain Class Points which can be used to rank up to differing classes via a skill branch. These unlock new skills, new moves, and change your stats or profession, so finding the path you want to take is important for unlocking a unit’s potential. 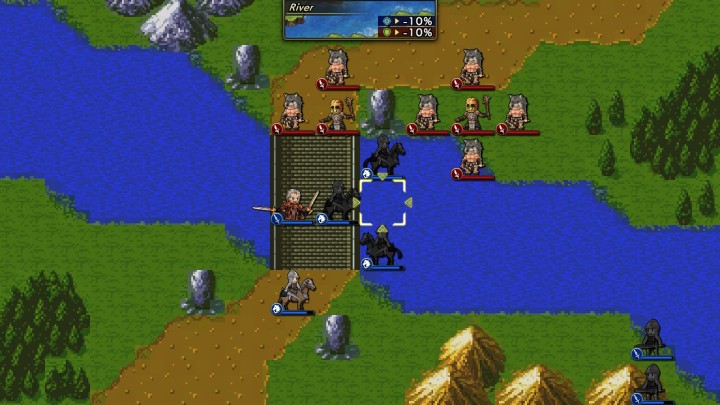 With that said, this isn’t a Fire Emblem knockoff, since the units aren’t the main powerhouses of your team. Technically, each unit has a number up to 10, representing their overall stats, and when in battle you not only lose the standard health that you’d expect to take in battle, but this health also reduces your army’s size. That means if you try to attack an enemy while you’re near death with only 1 or 2 points left, you won’t deal nearly as much to them as if you were in full shape, though being on differing terrain can help your defenses.

Not to mention that you can also recruit mercenaries for each of your units, starting with very basic grunts to some pretty powerful hitters such as the Dragoon, Crusader, and Phalnax classes. These mercenaries surround your main units, can do more than enough damage by themselves, and help cover a lot of ground. Plus, you can even use these to gain experience on weaker units, since if they kill an enemy, the unit that hired them will get all the benefits, which makes Langrisser not suffer so much from having weak units late in the game be near worthless, since you can still level up quite a bit even in the final chapters. In fact, you can even jump back to earlier chapters if you must, although you’d have to complete all the chapters from that point onward all over again if you do, effectively acting as a weird new game plus. (An actual new game plus mode is also in both games when you clear a route) 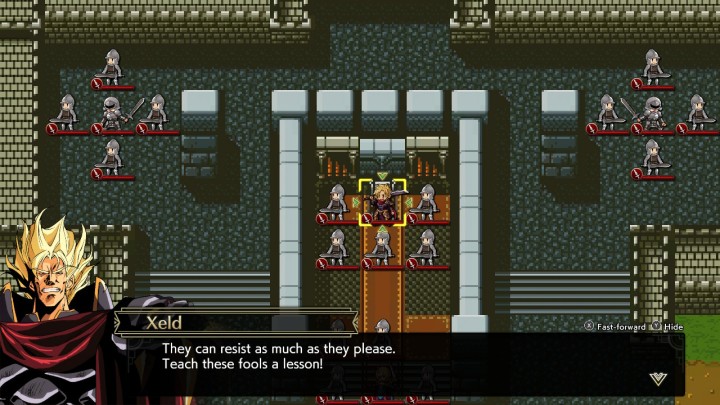 You will need gold to recruit these mercenaries, however, but you can start both titles with an “Easy start” mode that gives you more than enough gold for the entire game, and even if you do get close to running out, defeating every unit on a map will give you more than enough to be set for several maps to come, which means that money in this game is pretty worthless all things considered, especially when you can sell off your old equipment to fund new ones, or you can hold off on recruiting units entirely, if you built up your main units enough to withstand things solo.

All in all, Langrisser 1 was a very enjoyable time, and I actually got really hooked on the gameplay loop to the point that I binged through four hours of the game and made it halfway through the story. Four more hours of play later, and I had completely beat the first game on the B route, which just required I protect a certain character from death near the end of the game. Yes, that does mean this game has alternate pathways and endings, but these are very few and far between compared to Langrisser II, where the feature originally came into play and was much, much more fleshed out. Here with the first game, it just offers some alternate “what if” scenarios that I didn’t feel the need to rush out and complete.

Speaking of Langrisser II, that’s the other half of the collection, and well… Things are pretty much the same in terms of control and combat. If you got used to the first game, you’ll be used to this one, though this game still added several new things, like the aforementioned alternate endings, (which are way more robust here) more complex maps, new classes, and a bit of a higher difficulty curve overall.

This game in particular benefits from the Legacy BGM DLC pack, since the PC-FX arrangements are outright godtier, giving me my first taste of any soundtracks from that ill-fated system, and a darn good one at that. The included genesis songs aren’t too shabby either, and pack a ton of energy the modern versions just can’t compare to. 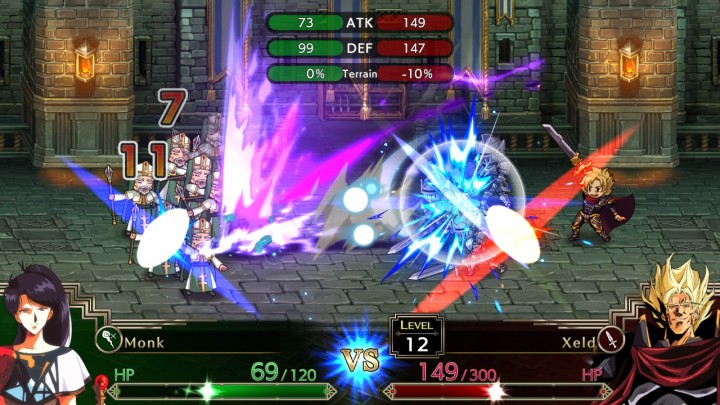 So in the end, Langrisser II ends up feeling a lot more like the ambitious, complex and in-depth RPG that you’ll be spending more hours with, but that doesn’t mean the first game isn’t a fun ride either. While a lot of things feel samey here and I found myself enjoying elements of II more for being newer, I can’t help but find the simplistic charm of the first game a bit more appealing, since the pacing is a lot faster. Still, both are very enjoyable titles that were remade well in this collection.

In conclusion, Langrisser I & II was a compilation I didn’t expect to love as much as I did. I had always dismissed the Langrisser series as yet another weird franchise Masaya made, during the time they were all into Cho Aniki and Shubibiman, but after playing this compilation, I have to say that these are damn impressive strategy RPGs that hold up way better than I expected them to be, and I’m overjoyed this compilation was localized after how we were thrown a godawful 3DS game a few years back, along with a middling mobile title a year ago.

For starters, the fact that these games just flow so well is a really nice touch, since older strategy games often suffered from long animations and boring turns. You still have animations here, and the turns can be a bit long when there’s a lot to fight on-screen, but you can turn off the animations and speed up the process by quite a bit, so battles don’t end up taking too terribly long, with my longest one from Langrisser 1 being a 30 minute battle. Combine that with quick saving and you have a very pick-up and play friendly set of games, perfect for the Switch’s handheld play.

Not to mention, the fact that the game in spite of it’s mobile-tier budget and visuals manages to pay big respects to its history by including the original Genesis soundtrack and character art is a very commendable move, since even the most modern of remakes seem to fail to keep the original soundtracks or visuals intact as an option. The fact they even went a step further and added DLC with the BGM of nearly every other port of the games, and you have yourselves a compilation that feels less like a basic remake job, and more like a proper look back into the game’s original history. My only main gripes come from the map spites remaining mobile-esque no matter what you do, along with the lack of any options to outright skip the enemy turns like in modern Fire Emblem titles, or an art gallery/history section. Besides that, these games are very enjoyable and well worth your time. Strategy fans waiting for a new fix, it has arrived in the form of Langrisser I & II.